Be inspired: Camping at Main Range is perfect for kids who never stop!

We love them dearly, but high-energy kids are hard work. They’re courageous and inventive, making their own adventures wherever they go (anyone else got one that climbs everything?), and while we admire their creativity, there’s no denying that the task of managing their energy levels is enough to deplete our own. Photo credit: © J Asche

Be inspired: Short walks for the family around south east Queensland

Walking in Queensland National Parks is a fun way to be healthier and happier, and to share special times with family and friends. Photo credit: Ellie Jamieson © Queensland Government 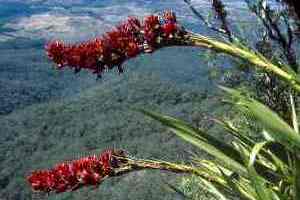 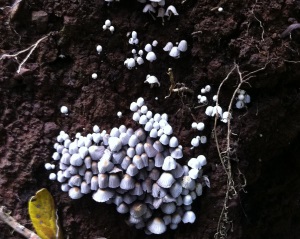 Fungi growing on the base of upturned tree roots.

Main Range National Park is on the western part of the Scenic Rim—a spectacular arc of mountains stretching from Mount Mistake to Springbrook in South East Queensland. It comprises 30,170.5 ha and is managed by the Queensland Parks and Wildlife Service (QPWS).

World Heritage status is a prestigious international recognition of the important conservation values of this area, especially its unique geology, subtropical and cool temperate rainforests and rare flora and fauna.

The dramatic escarpment of the Main Range is a remnant of a volcano that was active some 24 million years ago. The basalt lavas formed a gently sloping shield-shaped volcano, which may have been as high as 1400 m. The Main Range shield volcano once spread across the Fassifern Valley, probably as far as Mount Maroon, Boonah and even Ipswich, and west to Warwick.

Prolonged erosion over 20 million years has removed mainly the eastern side of the volcano. The relatively steep gradients and greater erosive power of the eastwards-flowing streams rapidly eroded the volcanic lava to create a retreating escarpment, exposing intrusive plugs and dykes beneath. In contrast, the gentler western valleys, such as the Goomburra valley, and ridges have remained behind the escarpment to form today's Main Range.

Differences in the mountains' topography, altitude, aspect and soil characteristics lead to diversity in the park's plant communities, which range from subtropical and cool temperate rainforest to wet and dry sclerophyll forest, montane heath and rock pavement vegetation.

Dry sclerophyll forests, dominated by eucalypts, occur in patches in the park. The understorey consists of she-oaks, wattles, grass trees and tussock grasses.

Montane heath is found in isolated areas on high, exposed mountain peaks. Because soils on these peaks are shallow and have low fertility, the canopy is rarely more than 2 m tall. These plants are highly vulnerable to human impact such as trampling by bushwalkers.

Rock pavement vegetation grows on exposed rock along cliff faces and ledges and in crevices and cracks. Such plants are usually small, with one notable exception: the spear lily, which grows to 3 m.

As part of the Gondwana Rainforests of Australia World Heritage Area, Main Range is an extremely important refuge for many threatened animals. These include a species of land snail, the beautiful Richmond birdwing butterfly, endangered birds (e.g. the eastern bristlebird), amphibians such as the Fleay's barred frog, and mammals such as the spotted-tailed quoll and the Hastings River mouse. Main Range National Park plays a vital role in protecting this rich diversity of globally-significant wildlife.

Goomburra section is a special area for frogs; your cooperation is required to protect them. 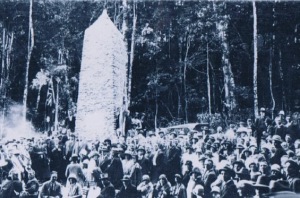 Opening of the Cunningham Highway at Cunninghams Gap, 1927. 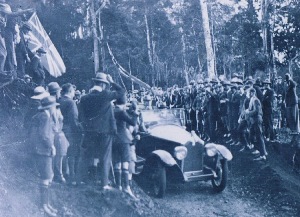 On 25 August 1828 Allan Cunningham was the first European to find and explore Cunninghams Gap. He named the guardian peaks of Cunninghams Gap as Mount Mitchell (after Sir Thomas Mitchell, Surveyor-General) and Mount Cordeaux (after William Cordeaux, Mitchell's assistant).

Cunningham's discovery seemed to solve the problem of finding a shorter route between Moreton Bay Colony and the newly-discovered Darling Downs. However, the route proposed by Cunningham proved too steep to negotiate easily, with drays and their contents having to be lowered by ropes over a cliff.

An alternative route was found in 1847, when stockman Henry Alphen was credited with discovering an easier route through a gap, 7 km to the south. It is thought that Aboriginal people used this gap in the range as a trade route between the east and west. Cunningham had noted the gap 20 years earlier but had not suggested its use for transport.

Alan Cunningham named Spicers Gap and peak after Peter Spicer, Superintendent of convicts, because he identified the peak while looking for escaped convicts from the Moreton Bay penal settlement.

Spicers Gap became the first safe and trafficable route between the port at Brisbane Town (then known) and the Darling Downs. Bullock teams would pull drays laden with wool to port and return with supplies for the Darling Downs settlers. Early road construction techniques can be seen along the old road in Spicers Gap Conservation Park. An inn used by travellers flourished for a short time opposite the present-day Spicers Gap camping area.

It took from the late 1850s to the mid 1860s to build a major road through Spicers Gap. By 1871, use of the road declined as the railway then linked Warwick to Moreton Bay via Toowoomba. A more direct route across the range was constructed at Cunninghams Gap and was opened in 1927 and later sealed in the 1940s. Today, it is a major interstate highway with more than a million vehicles passing through each year.

The extensive forests of the Great Dividing Range were recognised as an important timber source. By the early 1900s, most of the area's red cedar had been felled and harvested. Timber-getters then turned to hoop pine, carabeen, pigeonberry, tulip oak and purple laurel. Ranges around Killarney, Emu Creek, Swan Creek, Cunninghams Gap, Goomburra and Mount Mistake were heavily logged throughout the 1900s.

As a result of representation by local people, Cunninghams Gap was reserved as a national park on 3 July 1909. Walking tracks were built in the park from the late 1930s to the late 1950s. In the 1960s and 1970s, a number of other national parks were reserved along the Main Range. In August 1980, the parks were amalgamated to form Main Range National Park.

Once a cattle property (owned initially in 1840 by Ernest Dalrymple—a close friend of the pioneering Leslie brothers), the upper reach of the Goomburra Valley is better known for its forestry history. As early as the 1870s, red cedar, pine and beech were logged from the valley and milled at Allora. By 1923, the upper reaches of the valley were proposed for State forest, and forestry planning occurred. Selective harvesting of hardwood and softwood species occurred and experimental plantations were established. By September 1985, forestry extraction from the valley, gorges and ridges had been reduced and in 2002 Goomburra was transferred to Queensland Parks and Wildlife Service through the South East Queensland Forest Agreement. Remnants of the area's forestry history are found along many of the walking tracks. Goomburra section was incorporated into Main Range National Park in June 2006.