Even when language was forgotten, Butchulla culture lived on through artwork.

Land, sea and animals are common themes by Butchulla artists who employ both traditional and contemporary methods to express their heritage—acrylic, ochre, bone carvings, clay, ceramics, print and wood burning. 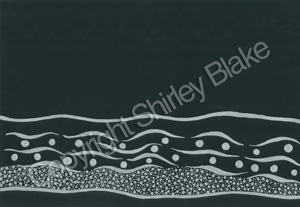 This piece is called ‘Waters of Wisdom’, which is the meaning of Boorangoora (Lake McKenzie). Shirley chose silver acrylic, the big and small dots together on the bottom representing the sand, the wavy lines representing the water and the large dots representing crystal clear. The background is black cartridge paper.

Aboriginal art and crafts have been a part of Shirley's life for approximately 25 years. Over the years, Shirley has taken aboriginal art into the schools and has shared her knowledge with Indigenous and non-Indigenous children. Shirley has also incorporated her art into wood burning, jewellery, printing on fabric and card making. 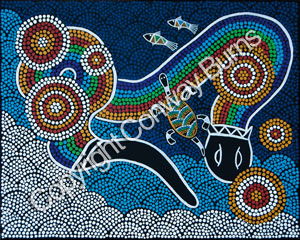 The circles represent people from all walks of life, different people coming together to enjoy one significant lake being Boorangoora (Lake McKenzie). The turtle and the small fish are some of the creatures that reside in the lake. Yindinji (the rainbow serpent... creator also known as a carpet snake) created the land, lakes, animals and people. That is why he holds such a big part of the painting—uniting the lake, the people and the creatures. The dots in the background represent the lake. White is the sand on the beach, light blue represents the shallow parts of the lake, and the dark blue represents the deep part of the lake. The medium used for the artwork includes a stretched canvas board and acrylic paints.

Conway Burns is a Butchulla descendent who has been doing aboriginal artwork for over 16 years. He has been successful in winning some art competitions held in Bundaberg in 2004–2005 and gained great satisfaction in knowing that people understood and enjoyed his style of artwork. Conway has been employed by the Queensland Parks and Wildlife Service for over eight years and enjoys being able to work on Fraser Island, which holds the history of his people—Aboriginal history. 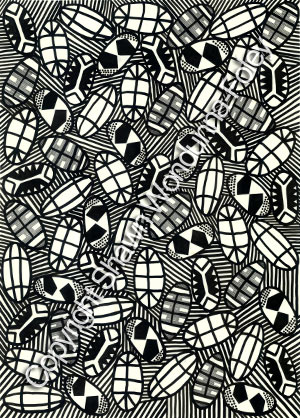 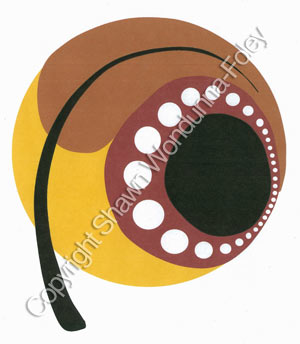 Artistic representation of a goanna on country, K'gari (Fraser Island). 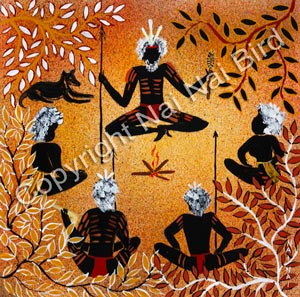 'Wonamutta Elders meeting around the fire'. Depiction of a goanna. Shawn is a contemporary Butchulla (Badtjala) Indigenous Australian visual artist local to Hervey Bay. His artistic inspiration is drawn from many tangible and intangible sources of living on country (land and sea), including Fraser Island (K’gari) and the Fraser Coast. The expression of simple, conceptual and abstract images underline the more meaningful and complex relationships that exist as a function of people, place and the living process of change. It is within this dynamic context that he creates opportunities to explore and express his unique Indigenous artistic perspective in both 2D and 3D.

This piece of artwork is an artistic representation of traditional shield designs used by Butchulla (Badtjala) men on country—K’gari (Fraser Island).

This piece is an artistic representation of Boorangoora (Lake McKenzie) on K’gari (Fraser Island). The artwork symbolises the lake wrapped by the environment.

This piece of artwork is an artistic representation of a goanna on country—K’gari (Fraser Island).

‘Wonamutta Elders meeting around the fire’

Nai Nai Bird is a Butchulla Elder from the Wonamutta Clan, who was taught the Butchulla art, culture and history by the Caboonya (Keeper of Records)—Aunty Olga Miller. The style of her artwork is a contemporary technique with a traditional theme. The medium used for this piece is acrylic on art paper.

Deleece is a Butchulla descendent from the clan group Wonamutta and family group Morris/Gala. Deleece is an emerging artist whose work reflects her Indigenous heritage in a contemporary manner. Her work often depicts the land and sea animals found in Butchulla country. Deleece works only with acrylic when painting. She has also produced works in other mediums such as clay (hand built pots) and bone carvings.

Aaron is a Butchulla descendent from the clan group Wonamutta and family group Morris/Gala. Aaron is a contemporary artist who has created artworks in the Fraser Coast region over the past 15–20 years. He has completed a number of public artworks in the immediate Hervey Bay area. Aaron is also a ‘songman’ who has performed extensively throughout the region. He also has an extensive, self-acquired knowledge of flora and fauna in Butchulla country. The Butchulla totem—‘Yul’lu’ (dolphin)—is a favourite subject of Aaron's, one which he has painted several times. Aaron works with acrylics in his paintings. He has also painted with ochres found locally.