In some families, when a Butchulla baby is born, it is taken to K’gari for a naming ceremony, and introduced to the old people. Maidie Page, one of many children embracing Butchulla culture. 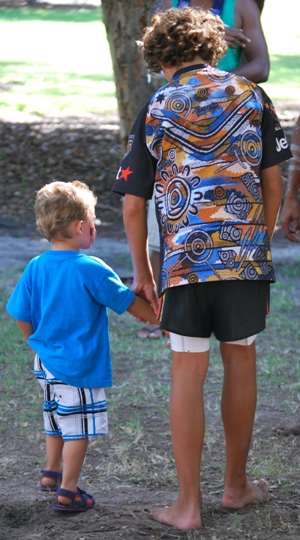 Every person is responsible for the person younger than them. Art is a focus of Butchulla culture.

The Australian Institute of Aboriginal and Torres Strait Islander Studies (AIATSIS) in Canberra holds a comprehensive collection of material on Butchulla / Batjala / Badtjala language and people or you can search the AIATSIS collections.

Every person is responsible for the person younger than them

From the elders to the young, each Butchulla person knows that they should take responsibility for those who follow.

K’gari Butchulla Dance Group was formed around 2005. Its members are passionate about teaching children and increasing cultural awareness throughout the community. Dance combines all elements of Butchulla culture—language, song, stories—sourced from oral history. When Aboriginal groups come together to share the joy of dance, dancers always follow protocol, asking permission to perform.

This dance is about wuruma (the bird known as brahminy-kite) who taught the Butchulla a very important fishing law—when djilgar (the black wattle tree) starts flowering, the diamond scale mullet is coming through. From wuruma, the Butchulla learnt never to hunt the first school of fish when the season starts. Wuruma never starts diving until that first school of fish has gone past because they are scouts searching for danger—if they don’t return to the rest of the school, the fish will swim back out to deep water and not return for a couple of years. After that first school of fish goes past, wuruma starts diving, which lets the Butchulla know it’s time to go fishing. All the way through that season, there will be plenty of fish.

Even when language was forgotten, culture lived on through artwork. Art and language are often combined in illustrated books.

Artists work with schools and communities on murals and mosaics. A main focus is teaching art to their own children.

Land, sea and animals are common themes by Butchulla artists who employ both traditional and contemporary methods to express their heritage—acrylic, ochre, bone carvings, clay, ceramics, print and wood burning.

Butchulla language almost disappeared early in the 20th century when missionaries and government forbade its use. However, Butchulla culture did not die, and was passed to each generation by parents and elders. Remnants of language, carefully recorded during the 1930s, form the basis of modern-day Butchulla language. It is kept alive through song, story telling and school language programs. In 2004, Jeanie Bell worked with the Korrawinga Aboriginal Corporation and Butchulla artist Jodie Burns to compile a dictionary of the Butchulla language, which contains illustrative sentences and a Butchulla to English list.

In 2010, the inaugural Butchulla Traditional Women’s Tour on Traditional Country, K’gari (Fraser Island) was held which showed Butchulla culture and history, focusing on the role of ancestral women and women’s sites on K’gari. Cultural entertainment by young men and women, traditional weaving, bush tucker talks and a bush tucker feast provided participants with a profound experience and lasting memories. Korrawinga Aboriginal Corporation was formed in 1972 when a group of women established a housing cooperative to meet the needs of the local Aboriginal people in the Hervey Bay area. Today, one of the focuses of the corporation is the preservation of Butchulla language and culture through activities, such as traditional dance, fishing, horticulture, weaving, sewing, beading and woodwork.

Luke Barrowcliffe, director of Goorie Vision, has recorded many cultural activities of the Butchulla community.

Community linguist Joyce Bonner (Narawi), from Korrawinga Aboriginal Corporation, is a driving force behind keeping the Butchulla language alive, particularly in schools of the region. Joyce is also a member of the Queensland Indigenous Languages Advisory Committee. In 2006, the corporation invited local primary school students to take part in a project to write songs in the Butchulla language, through their language classes. A group of students travelled to Brisbane to record eight songs for a CD, Gambay kalim baba-mi marigurim—together as one standing strong. The Butchulla language program also produced a set of bi-lingual language teaching books through the Aboriginal and Torres Strait Islanders centre, State Library of Queensland.

In 2010, the Queensland Studies Authority approached the corporation with a proposal to teach Butchulla language—through stories, art and dance—in primary and secondary schools of the Great Sandy region. The corporation also instigated a series of ‘Learn Butchulla’ language features in the local paper, Fraser Coast Chronicle. In 2010, an education package was produced consisting of a DVD and CD entitled ‘waaka jaalangu’ (untold stories) together with a series of short stories written by Joyce Bonner and illustrated by Jodie and Virginia Burns. These publications are held in the Fraser Coast library. 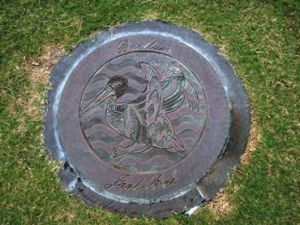 Aunty Nai-Nai Bird, a Butchulla elder, has made a study of the traditional use of native plants. She keeps the teaching of medicines alive with educational talks and through her writing.i

Fraser Coast campus of University of Southern Queensland (USQ) has embraced the local Indigenous culture offering, as part of the study aboard program, an intensive four-week course—On Country Learning: Indigenous Knowledge through Butchulla Culture. The program, involving lectures, workshops and field trips to cultural sites, is unique in that it is specific to one cultural group, the Butchulla, and is taught by Butchulla people.ii 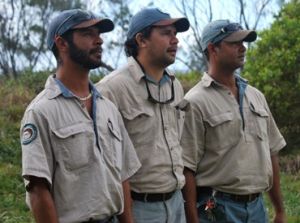 USQ bestowed honorary degrees of Fellow of the University to Aunty Olga Miller in 2003 and Aunty Marie Wilkinson in 2010, in recognition of their achievements in education for their people.

Appreciating that students and the community would benefit from a place of rest and relaxation, USQ created the Aunty Olga Miller commemorative garden in 2009. The garden takes as its theme the children’s books written by Aunty Olga during the latter part of her life. It incorporates 32 bronze plaques designed by Indigenous artist Joyce Watson and portrays many of Aunty Olga’s storylines and landmarks. A border leads through the garden to a yarning circle with the Buallum Jarl-Bah (pelican) emblem, designed by Glenese Blackman Gulliver, at its centre.

Living and working on country

Both types of rangers have specific roles within their work programs, which include: 'Respect the land' interpretive sign installed in 2004 as part of the Fraser Island Great Walk. 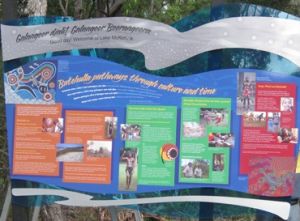 Interpretive sign installed in the visitor precinct near Boorangoora (Lake McKenzie) in 2010. 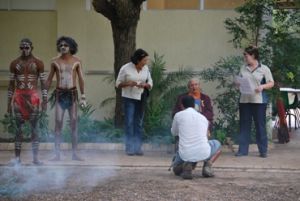 Butchulla descendants and government ministers at the launch of the redeveloped visitor precinct near Boorangoora (Lake McKenzie).

Butchulla people are involved in many local, government and interpretive programs. Their advice is regularly sought by Queensland Parks and Wildlife Service, and a strong working relationship has developed over the years.

The Fraser Island World Heritage Area (FIWHA) Indigenous Advisory Committee is a key consultative arrangement between QPWS in the Great Sandy marine region and the Butchulla community. The committee:

The Queensland Parks and Wildlife Service thank all who contributed to the telling of the Butchulla story for this web page, in particular the 2010 IAC’s co-chairs—Uncle Malcolm Burns and Jan Williams—who worked closely with the QPWS staff to facilitate consultation with the wider Butchulla community.

Welcome poles by Butchulla artists Jan Williams and Narelle De Satge-Blackman represent information that is important to the Wondunna clan. The hand-painted welcome poles stand near the disused McKenzie’s jetty, beside an interpretive sign, ‘Respect the land’, installed in mid-2004 by Queensland Parks and Wildlife Service rangers, as part of the Fraser Island Great Walk. The artists spent three to four days on country designing and painting the poles, which welcome visitors to the area.

Butchulla people were genuinely involved with a project, during 2009–2010, to redevelop facilities near a culturally important site at Boorangoora (Lake McKenzie). Research undertaken by many community members formed the basis of the story told on a magnificent, ground-breaking interpretive sign.

As part of the information gathering, QPWS hosted a community day with many Butchulla descendants, listening to their stories and interviewing elders and young alike.