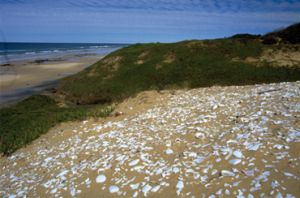 If too many shells of one species were present in middens, that species was not hunted, allowing it to increase in numbers again. Canoes and shelters were made of bark taken from living trees.

Since creation, Butchulla people have lived by three lores:

What is good for the land comes first

Hunters, aware that animals found on the island could die out if hunted excessively, only took what was necessary for food. Even today, scarce resources are protected, often using the totem system which forbids their use.

Monitoring soil, plants and animals provided clues to Aboriginal people on how to best manage their land.

Boorangoora (meaning ‘waters of wisdom’ and also known as Lake McKenzie) was a place for decision-making. The wise ones would meet here to listen for messages on the breezes sent from the spirits. Butchulla people camped near fresh water sources such as Boorangoora to eat and drink. They did not swim in these waterholes, taking care not to dirty their source of drinking water. If the land grew tired, they moved camp to allow rain, sun and wind to cleanse the site.

Respect for the rights of others was, and remains, integral to Butchulla way of life. Women and men kept their business separate. Each group guarded their own knowledge and sacred sites.

This respect extended to the plants and animals that provided for the people. Butchulla people did not cut down trees, but gathered branches for shelters, bark for canoes, piccabeen palm fronds for useful baskets, and vines for nets. This ensured continued growth of plants for future use.

Tourism is not new to K’gari (Fraser Island). Each winter, as certain fish—tailor and mullet—arrived in waters around the island, Aboriginal people from other language groups trod established pathways looking to share this bounty. They sought permission from elders, or were invited by them, to cross Great Sandy Strait and enter Butchulla land on the western side of the island. Numbers would swell from around 400 people to a couple of thousand throughout the season. Visitors were always made welcome, as sharing was a way of life.

With summer’s return, seasonal seafood moved on, as did these visitors.

It was everyone’s responsibility to live the ‘proper way’ according to lore.

Butchulla children learnt to live the proper way through stories. Whether retold around a campfire before sleep, or drawn as pictures in coloured sands by Moonie Jarl (Butchulla story teller), each story held the same moral—if you are good, you will be rewarded; if you are not good, you will be punished.

Stories were passed down to the younger generations through corroborees with song and dance, and through art and craft. Today, these same stories form the basis of Butchulla dance. During their lives, some elders produced books, such as Legends of Fraser Island and The Legends of Moonie Jarl, which retell creation stories of the land, animals and plants. These books, are now stored in libraries, thanks mainly to elders such as Aunty Olga Miller and Uncle Wilf Reeves, who wanted to write the stories down so they will not be forgotten.

Aboriginal people travelled the land, visiting other language and family groups to swap knowledge, join in corroborees and, at times, share in abundant food. Areas of land called freeways or pathways enabled them to pass without trespassing on a neighbour’s land. Many present-day highways follow the old pathways. Aboriginal life was disrupted soon after European occupation in the 1840s. Dispossession of land and reduced access to native plants and animals caused disruption to the Butchulla people’s beliefs and practices. Disease, alcohol and opium addiction largely destroyed their traditional way of life.

Clearing of land for pasture and the advent of timber harvesting in the 1860s hastened the demise of local lifestyles. By the late 1800s, most remaining Aboriginal inhabitants from the region were relocated to a mission settlement on Fraser Island. A succession of missions followed until the final Fraser Island mission at Bogimbah was disbanded in 1904, when most Aboriginal inhabitants were sent to various Queensland missions, including Yarrabah near Cairns.i However, some Butchulla inhabitants remained on the island, living on the back beach.

Butchulla people were recognised for their proud stance and strong bearing. With an abundance of seafood and mammals, plus a wide variety of plants to harvest, their good health was assured.

They held the belief that all creatures were important for the land. When on K’gari, they harvested only birds and seafood, knowing that mammals and reptiles could disappear if over-hunted. Scarce resources were protected, often using the totem system which forbade their use.

These days, Butchulla elders still make a study of traditional use of native plants for food and medicine.ii

Butchulla people used rope made from vines to climb trees in search of honey. Honey bees—native bees about the size of a small bush fly—were guarded by very strict rules. The people were selective when picking flowers, leaving white flowers that were favoured by the bees to make honey (a favourite sweetener) and wax (used in canoe construction).

Butchulla people believe all life is connected. Some signs in nature give clues for other events, for example:

The cotton tree has many uses for the Butchulla—its sap heals warts and ringworm, and its wood forms a base on which to make fire. The Butchulla also know that eucalyptus leaves, when sweated over a fire, secrete an oil that repels mosquitoes; and its soft resin, melted over a fire, quells toothache. In times of drought, fresh water can always be found beneath the roots of the Casuarina tree.

Specialised knowledge was required before eating fruit of the pandanus. It took a week of soaking in fresh running water followed by rigorous pounding before the fruit, rich in fats and proteins, and with the sweet flavour of custard apples, could be enjoyed. Pineapple-shaped fruit of the Macrozamia cycad required similar treatment to unlock the starch to make bread.

Not all food required such intensive treatment. Roots of bungwall ferns and yams provided important readily-sourced starch. Berries, such as the small sweet midyim, were also there for the picking, although the people were careful not to strip all the berries from the bush, leaving sufficient to reproduce. A number of yams were always returned to the soil for next year’s harvest.