Conservation of the K'gari (Fraser Island) dingo is of national significance.

K'gari (Fraser Island) World Heritage Area—part of the Great Sandy National Park—lies north of Brisbane (Australia), off Queensland’s Fraser Coast, near the cities of Maryborough and Hervey Bay, and the coastal town of Rainbow Beach.

The dingo Canis lupus dingo is protected in Queensland national parks as a native species. The Queensland Parks and Wildlife Service has a legal responsibility to conserve these populations on national parks and protected areas, even though the dingo is a declared pest outside of these areas.

Wildlife authorities recognise that K'gari (Fraser Island) dingoes may become the purest strain of dingo on the eastern Australian seaboard and perhaps Australia-wide (Woodall et al 1996 as quoted in K'gari (Fraser Island) dingo management strategy – review, December 2006, library document list) as they have not crossbred with domestic or feral dogs to the same extent as most mainland populations. Therefore, their conservation is of national significance. 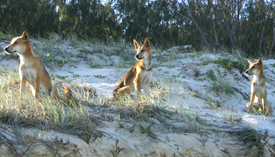 Colour markings are unique to each dingo.

On K'gari (Fraser Island), dingoes are normally a golden sandy colour. They are often born with black markings particularly on the back and tail and lose the black hair as they get older. Juveniles may retain black on their backs and sometimes on their tails. Most have white markings on their chests, tail tips and feet—described as socks. Some have black muzzles and all have pricked ears and bushy tails. Tail tips, socks and any fighting scars are unique to each individual dingo and these help in individual dingo identification. Adult dingoes on K'gari (Fraser Island) stand more than 60cm high, about 1.2m long and have an average weight of around 18kg. This is a higher average mass than dingoes from Kakadu (16kg), the Victorian Highlands (15kg) and Central Australia (13kg) (Corbett, L 1995, The Dingo in Australia and Asia, UNSW Press, Sydney). The dingoes from these three areas were also about 1.2m long, indicating that K'gari's (Fraser Island) dingoes are about the same size as dingoes from other areas and, if anything, a bit heavier. They certainly are not leaner than dingoes from other areas.

Most female dingoes become sexually mature at two years of age but some may produce pups in their first year. Unlike the domestic dog, the dingo breeds only once a year. Gestation takes about 63 days and litters of 1–10 pups (normally 4–6) are born and cared for (whelped) during the winter months. Dens are hidden in areas, such as a hollow log or in a hole dug under the roots of a tree. Pups usually become independent at 3–4 months, or if in a pack, when the next breeding season begins.

Dingoes produce several types of vocalisations. They howl to announce their location and find out where other dingoes are in the landscape, mostly at night to keep the pack together and to warn others to stay away. Packs often howl in a chorus, which may be more intimidating to other packs. Strangely, K'gari (Fraser Island) dingoes often howl at the sound of aeroplanes landing or taking off. Dingoes also produce bark-howls, which are agitated calls made when the animals are alarmed. Other dingo sounds are moans and snuffs. Wild dingoes have not been recorded to bark, but captive dingoes sometimes learn to bark from nearby domestic dogs.

Watch out—dingoes can bite. A dingo is a wild animal and can be unpredictable and dangerous.

It is illegal to disturb or feed wongari (dingo), which includes attracting them with food or food waste. On K’gari (Fraser Island) an increased maximum fine of $11,500 and an on-the-spot fine of $2,300 now apply to those people who break the law. Be dingo-safe.