Camp beside the waterhole and birdwatch in the nearby swamps and lagoons. Photo credit: © Queensland Government

Camp beside this large waterhole on the Laura River and explore the feature-packed southern part of the park.

Not far from the southern entrances to the park, you’ll be glad to arrive at this camp after a dusty day on the road.

Enjoy a peaceful night’s sleep and then pack a picnic lunch and daytrip to the nearby Old Laura Homestead, Lake Emma and Horseshoe Lagoon. The richly historical homestead will introduce you to the long and varied history of the park, and the lakes and lagoons will deliver hours of birdwatching.

If you’re keen to fish, flick lures from the riverbank near the camp, or head up the road and try your luck at Catfish Waterhole. 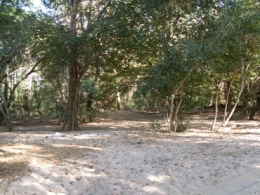 Adjacent to a large waterhole on the steep western bank of the Laura River. Nearby are swamps and lagoons, which are ideal for bird watching. Large crocodiles are frequently seen here—be croc wise in croc country.