Stay for a few relaxing days at this quiet and shady oasis on a shallow section of the mighty Normanby River.

The peaceful surrounds will help you unwind after a long day on the road. With no other camps nearby, this quiet bend in the river is a great place to spend a few days.

Walk along the bank flicking lures at snags, hoping to entice a barra or mangrove jack for dinner, or see if you can spot the resident croc sunning on a sandbank.

Spend a day sightseeing around the park. Red Lily and White Lily lagoons and the old Breeza Homestead are just down the road and there’s plenty more to see further afield. 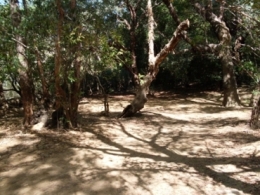 Adjacent to shallow water on a low bank on the western side of the Normanby River. Large crocodiles are frequently seen here—be croc wise in croc country.