Camp site one is next to a large sandbar on the junction of the Normanby and Laura rivers. Photo credit: Doug Davidson © Queensland Government

Choose from a variety of shady camp sites overlooking this secluded lagoon on the Normanby River.

The sites are nestled among trees along both deep and shallow sections of the lagoon, and near the junction with the Laura River. Camp site one has beautiful views overlooking the sandbar at the confluence.

Boat access isn’t great but you can manually launch (no trailers) boats from camp sites five, six and nine. You’ll have just as much luck flicking lures from the banks.

After a day relaxing and fishing, sit around the camp fire under a clear sky scattered with bright stars and plan the next day’s activities. 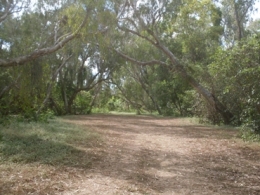 Adjacent to both deep and shallow waterholes on the steep (2–4m high) western bank of the Normanby River, near its junction with the Laura River. All camp sites are located on a steep river bank and offer poor boat access. Camp site one is adjacent to a large sandbar and overlooks the junction of the Normanby and Laura rivers. Large crocodiles are frequently seen here—be croc wise in croc country.