Make this camping area your Rinyirru base, high on a bank at the junction of Brown Creek and the Bizant River.

This open and sunny camping area has lovely views over the waterways and surrounding floodplain.

Take your boat to the nearby Bizant River boat ramp and spend the day fishing and sightseeing in Brown Creek, Bizant River and Princess Charlotte Bay.

Critically endangered Bizant River sharks, or speartooth sharks, are found in the Bizant River. Very little is known about this species, but they are susceptible to line fishing, gill netting and habitat destruction. Take care if you happen to hook one and return it unharmed to the water.

Once the sun sets, sit around a camp fire swapping fishing stories and listening to the sounds of the night. 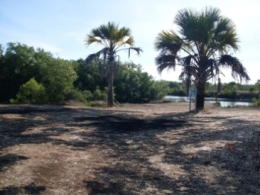 On a high bank at the junction of Brown Creek and Bizant River. It is close to the boat ramp at Bizant River. This camp site is used to access both the Bizant River and Princess Charlotte Bay. The unformed boat ramp is open to the public. Large crocodiles are frequently seen here—be croc wise in croc country.