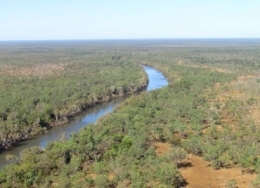 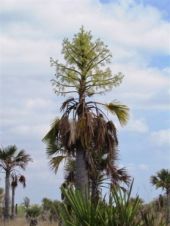 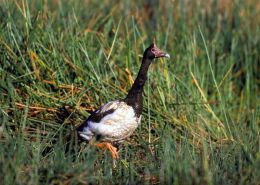 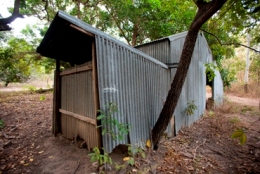 The park has three major rivers systems—the North Kennedy, Normanby and Morehead rivers. During the peak of the wet season (December to March), heavy rains cause the rivers to flood. Water rises above the river banks and spills out onto the floodplains, creating an extensive wetland system of billabongs, lagoons, swamps and lakes. During this time animals disperse far and wide as food and water is plentiful. Estuarine and freshwater crocodiles bask on the water surface. Waterbirds include brolgas, sarus cranes, black-necked storks, magpie geese and ducks.

Around April heavy rains ease as the dry season approaches. For the next six months the floodplains and associated wetlands dry out and by October the land is brown and parched.

Open woodlands of eucalypts and paperbarks cover the floodplains, while extensive grasslands, with patches of the unique corypha palm, cover the marine plain. Gallery rainforest grows along parts of the Normanby and Kennedy rivers. Salt flats and fringing mangroves are common in the tidal zones around Princess Charlotte Bay.

In the open woodlands and grasslands, agile wallabies are abundant and can often be seen grazing or sleeping. The less common northern nailtail wallaby is more elusive. Australian bustards can sometimes be seen in the grasslands in family groups or individually.

The park is home to a number of threatened species including the golden-shouldered parrot, star finch, red goshawk, Lakeland Downs mouse and spectacled hare-wallaby.

The critically endangered speartooth shark has been found in the Bizant River in Rinyirru (Lakefield) National Park (CYPAL). This species occurs in freshwater and anglers are requested to treat all sharks with care and return them to the water unharmed.

Red Lily Lagoon is one of many lagoons in the park’s extensive floodplain. It is part of a huge wetland system made up of billabongs, swamps and lakes. From December to March (the peak of the wet season), floodwaters spill out onto the floodplain to produce a vast wetland mosaic.

As the dry season (June to November) approaches, water levels recede and the floodplain slowly dries out. Some wetlands dry out completely while others, such as Red Lily Lagoon, retain some water all year round. By the end of the dry season this lagoon may appear dry around the edges but water is retained towards the centre.

Lagoons that have water all year round often have a greater number of plants. The most common, and yet spectacular, plant at Red Lily Lagoon is the tall lotus lily with its large pink flowers and dense yellow stamens. These lilies prefer deep water, but can also survive in shallow areas. Various plants are found in shallower waters along the fringes of the lagoon and include sedges, grasses and herbs as well as paperbark trees.

Aquatic plants at Red Lily Lagoon include the pink waterlily, smart weed, water primrose, bulkuru sedges and umbrella sedge. Paperbarks, such as the one shading the walkway to the viewing deck, are commonly seen growing along the fringes of wetlands and river systems.

Brolgas and sarus cranes can often be seen in pairs or family groups striding through the tall lilies searching for sedge tubers, which they dig up from underground with their long bills. Both birds perform dancing courtship displays with wings outstretched and heads bopping—a treat to watch.

Catfish Waterhole is one of many deep permanent waterholes found along the North Kennedy River. During the dry season, as water becomes scarce elsewhere, large numbers of wildlife congregate here for food and shelter. Visitors to the day-use area at Catfish Waterhole can see waterbirds, turtles and crocodiles.

Darters and little pied cormorants are regular visitors to the waterhole. They can often be seen roosting on old logs and branches during the day. Nankeen night herons roost in branches along the banks of the river during the day, stalking the river's edge for small fish, frogs and shrimps. If they appear any earlier than dusk, white egrets are quick to harass them. These egrets also stalk the river edges, preying not only on fish but also baby crocodiles. Ironically, as the crocodile grows into an adult, the tables are turned and the egrets become the crocodiles' prey.

Estuarine and freshwater crocodiles patrol this waterhole. These wetland predators can be seen swimming on the water's surface or basking along the riverbank. They range in size from the smallest of babies to giants over 5m long. These ambush hunters mostly feed along the water's edge. Their prey includes fish, frogs, turtles, mammals and birds. Surveys undertaken at this waterhole show that crocodile numbers increase during the dry season as they move into the permanent water.

Long-necked turtles are also ambush hunters. They sometimes conceal themselves in sediment at the bottom of the waterhole and, using their long neck, strike with speed and accuracy, engulfing small fish and shrimps with their large mouths.

Riverine plants are exposed to the full force of floodwaters during the wet season. As the rains recede and the landscape slowly dries out, they are then exposed to the harsh conditions of the dry season. To survive the two extreme seasons, riverine plants have special characteristics, such as extensive root systems for extra support, or leathery or pendulous (down-hanging) leaves to reduce moisture loss. Riverine plants at Catfish Waterhole include the freshwater mangrove, paperbarks, weeping tea trees and corypha palms.

Rarda-Ndolphin (Low Lake) is a restricted access area. Visitor access is limited to the car park and viewing area.

Rarda-Ndolphin (Low Lake) is a permanent lake system connected to Saltwater Creek, which drains into the North Kennedy River as it flows towards Princess Charlotte Bay. Like many other wetlands, the lake’s floor has a thick layer of organic matter—rotting plant roots, leaves and bird droppings—that supports a myriad of microbes and small animals, providing a rich source of food for waterbirds, particularly when other, less permanent wetlands dry out. Bulkuru sedges provide excellent habitat and nesting sites for waterbirds, in particular magpie geese, which feed on the sedge roots, tubers and blades. Lilies such as water snowflakes and large waterlilies provide feeding and roosting platforms for the comb-crested jacana. Visitors can also see green pygmy-geese and black-necked storks (jabirus).

Nine different Aboriginal clans, made up of at least 75 key family groups, occupied this area prior to European settlement. The Traditional Owners of this park are the Lama Lama and Kuku Thaypan peoples, the Bagaarrmugu, Mbarimakarranma, Muunydyiwarra, Magarrmagarrwarra, Balnggarrwarra and Gunduurwarra clans and some related families. The landscape has major Aboriginal cultural significance and features many occupation, ceremonial and story places. These include Rarda-Ndolphin (Low Lake), the Hann and Kalpowar crossings and Rinyirru (a bora ground near Blue Lagoon, and also the name for Jeanette Hill).

Rarda-Ndolphin (Low Lake) is a very important spiritual and ceremonial place. It has a shared traditional name, Rarda-Ndolphin—Rarda from the Awu-Laya language and Ndolphin from the Lama Lama language. The shared name reflects the strong link between the family groups who, for thousands of years, have shared the responsibility for looking after this country.

Aboriginal people collected valuable food, medicine and material resources from many of the park's lagoons and waterholes, but not from Rarda-Ndolphin. Traditional laws protect the lake and its surroundings from all disturbances. Through these laws and customs, the Traditional Owners have managed the park's extensive wetland system for thousands of years.

Old Laura Homestead is historically significant through its association with the establishment of the cattle industry on Cape York Peninsula and the Palmer Goldfield. Miners once used the track leading to the homestead as the main access to the goldfields.

In 1879, a lease was granted for Laura Station, (now the southern end of the park). Other pastoral holdings, such as Lakefield, were granted later. Aboriginal people contributed significantly to the early success of the cattle industry. The oldest part of the homestead dates back as early as 1892 and Old Laura remains one of the most intact early pastoral homesteads left in the region.

In 1879, a young Irish immigrant, Fergus O'Beirne, selected Laura Station as a lease that was recorded with the Crown Lands Office on 14 October 1879, at a cost of eight pounds 15 shillings for an area of 50 square miles (12,800ha). This area was increased and by 1894 the property was carrying 8000 head of cattle. After Fergus O'Beirne's death in 1896, the lease was transferred to O'Beirne and Company; his descendants remained with the company until 1925.

The oldest part of the existing group of buildings dates from 1892. Around 1908, the homestead was a timber-framed structure on high stumps with a corrugated iron roof. The ground floor was made of ox blood clay from termite mounds. The upstairs bedrooms were surrounded by a split bark awning. Detached from the residence and built of timber slabs, the kitchen also had a dirt floor made from compacted termite mounds.

Timber used to build the homestead was pitsawn locally from Leichhardt trees. The remaining veranda awning is but a shadow of an amazing split bark awning that extended from the underside of the first floor. The split bark was fixed by saplings wired to supporting timbers.

In 1925, the lease for Laura Station was transferred to Patrick Bernard Grogan and David Joseph Grogan. It was about this time that the buildings were modified. By 1930, the bark awning roof had been replaced by corrugated iron. One upstairs bedroom was extended, a new well was dug and a windmill erected in 1930. A septic toilet was installed in the residence in the 1930s.

During the early 1940s, the ground floor was remodelled to include a visitors’ room, station hands’ bathroom and a storage room for dry food and rations. The veranda was also lowered and wooden louvres installed. The kitchen area was modified and outbuildings were constructed, such as the workshop and saddlery, cattle yards, station hands’ accommodation and the meat house.

In 1978, Lakefield and Laura stations were purchased by the Queensland Government to establish Lakefield National Park. In 1984, QPWS commissioned the National Trust of Queensland to assess the cultural significance of Old Laura Homestead and recommend action for its conservation. As a result, a project was launched in 1986 in cooperation with Operation Raleigh. Volunteers began reconstruction of the homestead and outbuildings. After several months of continuous labour, the buildings were restored to their present condition and Old Laura Homestead is now listed on the Queensland Heritage Register.

Sinclair Balser and his family originally took up Breeza Station to breed horses for the Palmer Goldfields. With the decline of the gold rush, horse breeding gave way to cattle breeding and fattening. After 23 years of harsh, difficult living, including the cattle tick outbreak of the 1890s, the family abandoned the property and returned to Cooktown to work as publicans. After the departure of the Balser family, Breeza Station was used as a mustering outstation and was also a stopover point for the early pack-horse mail on route to Coen.

Today, the road through the park passes by the lagoon, remnant buildings, cattle yards and 100-year-old mango trees that mark the site of Old Breeza Homestead.

In the mid to late 1800s, many early explorers, geologists and surveyors (including Kennedy, Hann, Mulligan, Logan Jack, Bradford and Embley) traversed parts of what is now Rinyirru (Lakefield) National Park (CYPAL). Hann Crossing is named after the explorer William Hann, who led an expedition to Cape York Peninsula and discovered the Palmer Goldfield. In September 1872, Hann crossed the North Kennedy River at the site now known as Hann Crossing.

'I came to a bar of sandstone grit stretching right across the river...here I crossed. The paths radiated in all directions, showing this to be a crossing place for the natives. I also saw a corroboree ground here, which is no doubt, a meeting place on great occasions. Close to our camp were clumps of fan palms of immense beauty...signs of alligators during the night from which it would appear they are here in great numbers.' (William Hann, diary record).

During the gold rush of 1873, access routes to the Palmer Goldfield passed through the southern end of Rinyirru (Lakefield) National Park (CYPAL).