Set up camp on an open flat next to the Bizant River. Photo credit: Doug Davidson © Queensland Government

Camp under the stars above the Bizant River and explore the natural riches of the rivers and Princess Charlotte Bay.

In the north-western part of the park on the Bizant River, this open and sunny camping area sits on a flat above a steep river bank.

After you’ve set up camp, launch your boat and head downstream to the pristine water of Princess Charlotte Bay. Make sure you flick a few lures at any promising snags on the way!

Critically endangered Bizant River sharks, or speartooth sharks, are found in the river. Very little is known about this species, but they are susceptible to line fishing, gill netting and habitat destruction. Take care if you happen to hook one and return it unharmed to the water. 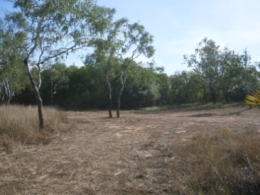