Ideal for an overnight stopover, this roadside camping area has views over a gentle bend in the Kennedy River.

Flanked by the road and a long waterhole on the Kennedy River, this shady camping area is a must for keen fishers and a pleasant rest stop after a dusty day on the road.

Camp sites two and three have manual boat launching (no trailers) but it’s just as easy to flick lures from anywhere along the bank. Keep an eye out for the very big resident croc!

At night, sit around the camp fire, pondering the day that has been and planning for tomorrow. You’ll fall asleep to the soothing sounds of the Rinyirru night, and be ready in the morning for another day in the park. 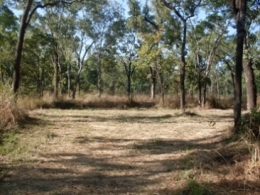 Adjacent to a permanent waterhole on the steep eastern bank of the Kennedy River beside the main road, making it more suited to overnight stops than extended stays. Large crocodiles are frequently seen here—be croc wise in croc country.