This secluded camping area, close to the northern entrance of the park, is a beautiful place to spend a few days.

Whether you're just starting or finishing your Rinyirru journey, you’ll enjoy the vistas of picturesque Sweetwater Lake from this secluded camp site.

Just as the name suggests, this stunning lake is blanketed by a dazzling display of colourful waterlilies and is home to a rich variety of waterbirds. After you’ve set up camp, grab your binoculars and camera and find the perfect vantage point to watch the waterbirds… and estuarine crocodiles!

After a peaceful night’s sleep, greet the sun and the waterbirds on the lake before packing a picnic lunch for more wildlife watching at nearby Low Lake (Rarda-Ndolphin) and the Nifold Plain. 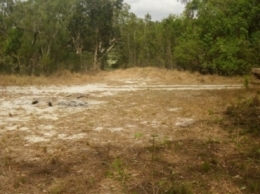 Adjacent to Sweetwater Lake, this is the first camp site in the park when coming from Musgrave Roadhouse. This permanent lagoon is ideal for bird watching. Large crocodiles are frequently seen here—be croc wise in croc country.