Prized as one of the park's top fishing spots, take your pick from four secluded camp sites along this large and permanent waterhole.

Set up camp on top of the steep embankment on the Normanby River and get ready for some of the park's ultimate fishing.

Manually launch (no trailer) your boat into the waterhole or cast a line from some great spots along the bank.

When the day is done, light the camp fire and cook up the day's catch under a star-studded sky. Fall asleep to the sounds of the Rinyirru night and wake ready for another day of fishing. 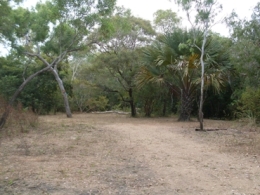 Adjacent to a large, permanent waterhole on the steep (2–3m high) western bank of the Normanby River, this is an ideal spot for both boat and bank fishing or just enjoying the peaceful surroundings. Large crocodiles are frequently seen here—be croc wise in croc country.