Soak up the solitude at this peaceful camp site on the banks of a deep and permanent waterhole on the Normanby River.

Launch your boat manually at the camp site (no trailers) and spend days exploring the Normanby River and its tributaries. Try your luck at landing a barra to cook over the open fire, or creep around birdwatching and croc-spotting.

When it’s too hot to be on the water, jump in your car and explore other parts of the park—White Lily and Red Lily lagoons, Breeza Homestead and Catfish Waterhole are just up the road.

After a day in the park, sit back and watch the sunset colours splash across the sky and then swap yarns around the camp fire. 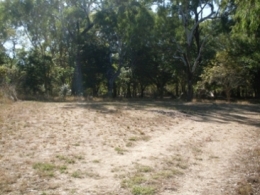