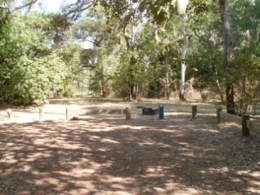 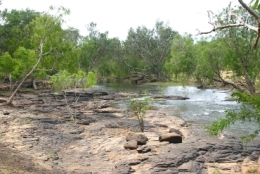 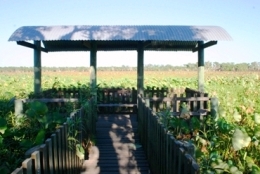 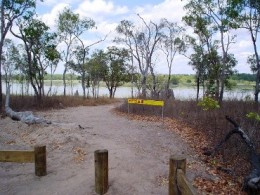 Distance: 4km return
Time: 1.5hrs
Details: This track follows the banks of the beautiful Normanby River from the Kalpowar Crossing camping area, through vine forest before looping back through open woodland. Magnificent weeping paperbark trees line the river banks and provide shade. The riverine environment and picturesque waterholes provide excellent opportunities for viewing wildlife. It is a great place to relax and unwind.

Drive four-wheel-drives through Rinyirru (Lakefield) National Park (CYPAL) on the network of internal roads. Expect to share the roads with pedestrians, cyclists, trail-bikes and other vehicles.

Stay on formed roads—vehicles are not permitted off-road, including on walking tracks and boardwalks. Vehicles are also not permitted in Restricted Access Areas or on internal roads and tracks that are closed for management purposes.

Drivers must be licensed and vehicles must be road-registered. For more information, see four-wheel driving.

Ride trail-bikes through Rinyirru (Lakefield) National Park (CYPAL) on the network of internal roads. Expect to share the roads with pedestrians, cyclists, vehicles and other trail-bikes.

Riders must be licensed and trail-bikes must be road-registered. For more information, see trail-bike riding.

Roads in national parks are the same as any other public road in Queensland. All vehicles, except those exempted by law, must be registered. The department does not give permission for conditionally registered vehicles (e.g. quad bikes) to be used recreationally by individuals. In many places it is not legally possible to issue a permit.

Surveillance cameras may be used to monitor visitor behaviour and movements throughout the park. On-the-spot fines may also apply.

Recreational fishing is permitted at all camping areas in Rinyirru (Lakefield) National Park (CYPAL). The use of private vessels is permitted—canoes are not recommended due to the presence of crocodiles. Please limit your boat speed to prevent bank erosion and water turbidity.

The critically endangered speartooth shark has been found in the Bizant River in Rinyirru (Lakefield) National Park (CYPAL). This species occurs in freshwater and anglers are requested to treat all sharks with care and return them to the water unharmed.

Be aware that crocodiles occur in the creeks, rivers, swamps, waterholes and along beaches of this park. Crocodiles are dangerous and attacks can be fatal Always be croc wise in croc country.

Cycle through Rinyirru (Lakefield) National Park (CYPAL) on the network of internal roads. Expect to share the roads with vehicles, trail-bikes, other cyclists and pedestrians.

Bicycles are not permitted on any of the walking tracks and boardwalks, in Restricted Access Areas or on internal roads and tracks that are closed for management purposes.

Catfish Waterhole, just off Lakefield Road between New Laura and Lakefield ranger bases, is one of many deep, permanent waterholes along the North Kennedy River. The waterhole offers visitors the chance to see waterbirds, turtles and crocodiles. During the dry season, as water becomes scarce elsewhere, large numbers of wildlife congregate here for food and shelter.

Red Lily and White Lily lagoons are about 8km north of Lakefield ranger base. A spectacular display of red lotus lilies can be seen from a viewing platform at Red Lily Lagoon, while only white lilies are found at White Lily Lagoon. A variety of waterbirds, including magpie geese and comb-crested jacanas, can be seen at these lagoons. Birdwatching is best in the early hours of the morning or late afternoon.

In the north of the park are the vast grasslands of the Nifold Plain. This treeless, flat landscape, dotted with termite mounds, is home to a variety of animals including birds such as finches and bustards. Early morning and late evening birdwatching can be rewarding.

Equipment, such as binoculars, camera and torch will make the visit more enjoyable. Please remember that crocodiles occur in this park so visitors must take precautions. Always be croc wise in croc country.

Other things to do

In the southern part of the park, a short distance off Battle Camp Road, is the historic Old Laura Homestead. Explore the buildings that were once the original homestead for Laura Station.

Explore the delightful lagoon and 100-year-old mango trees that, along with remnant buildings and cattle yards, mark the site of Old Breeza Homestead. Camping is not permitted here.