The camping area is sprawled along the banks of the North Kennedy River. Photo credit: © Queensland Government

There’s something for everyone at this riverside camping area. Pick from large and small camp sites, some with boat launching facilities, and all just a stone’s throw from the river.

Fish from the bank or jump in your boat and head downstream to where the North Kennedy River meets the Hann River.

When you need a break from fishing, grab the family and head to the Breeza Homestead, and White Lily and Red Lily lagoons—they’re just down the road.

Back at camp, wait until the sun goes down and see how many sets of croc eyes you can spotlight along the river.

Hann Crossing camping area is open 24 hours a day. Check-in to your camp after 2pm and check-out by 11am on the day of departure.

Check park alerts for the latest information on access, closures and conditions. 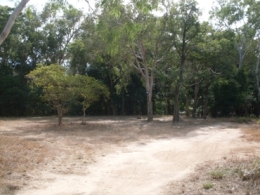