Be inspired: Camp amongst a ‘Flower and garden’ show that outshines all others at Girraween

‘It’s bloomin marvellous’, as Australian gardening guru, Peter Cundal, would say. You don’t need to fly to the UK for the Chelsea Flower Show or trek to Melbourne for the International Flower Show because, when it comes to wildflowers and rock landscaping, Girraween National Park outclasses them all. Photo credit: © Sarah Haskmann

If an escape from the family school day routine appeals (like, really appeals!) but the idea of a family road trip and camping holiday conjures up images of the Griswolds on vacation, leaving you in a cold sweat, we have a solution! Photo credit: Maxime Coquard © Queensland Government 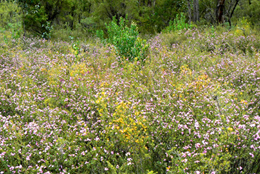 Massive granite outcrops, precariously balanced boulders, clear streams and tumbling cascades are set within 11 800 hectares of eucalypt forests, sedgelands and heathlands. These significant communities provide for a mixture of plant and animal species usually found north, south, east and west of Girraween, and some that do not occur naturally elsewhere.

Girraween is an Aboriginal word meaning 'place of flowers'. It is not of local Aboriginal origin, but is an apt name for this rugged place with spectacular spring wildflower displays.

Wildflowers begin to bloom in late July with golden wattle brightening the bush canopy, and pea flowers bursting into blossom below.

September and October are the most spectacular months, with magnificent displays of delicate white heath bells and the bold yellow, purple and red pea flowers splashing the granite-strewn countryside with colour. Grass trigger plants, billy buttons, native bluebells, native sarsaparilla and a variety of daisies contribute to the spring show.

The display ends during November, with the summer-flowering flannel flowers, wattles, bottlebrushes, paperbarks and eucalypts.

Swamp communities flourish in the headwaters of Girraween National Park's creeks and where granite outcrops impede drainage. Sedges, rushes, swamp selaginella and sphagnum moss have adapted to the waterlogged conditions.

Trees are sparsely scattered throughout these swamps, with messmate stringybark Eucalyptus obliqua making its home in the swamps at South Bald Rock. Heaths, sundews and grasses fringe the swamp edges, with much-admired terrestrial orchids. 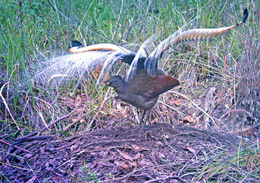 Flowering shrubs attract beetles, butterflies and other insects—food for many birds, reptiles and mammals. Throughout summer the double drummer cicada's high-pitched mating calls chorus through the eucalypt forests. Being short-lived, the dying cicadas become a hearty feast for a lucky furred, feathered or scaly resident.

Warblers, parrots, treecreepers, flycatchers and honeyeaters live among the eucalypts and flowering heaths and shrubs. Robins, thornbills, wrens and firetails seek shelter and hunt insects in the dense understorey, while birds of prey such as the little eagle Hieraaetus morphnoides, wedge-tailed eagle Aquila audax and the brown goshawk Accipiter fasciatus search for a meal in open grassy areas.

Superb lyrebirds Menura novaehollandiae prowl moist gullies, scratching through leaf litter for grubs and insects. Listen for these masters of mimicry on cool winter days as they incorporate different sounds from the bush as well as other birdcalls into their song.

The superb lyrebird and chestnut-rumped heathwren Hylacola pyrrhopygia are at the northern extent of their usual range. These, and the southern emu-wren Stipiturus malachurus—at the western most extent of its range—are particularly interesting to the ornithologist. The beautiful colours of the rare turquoise parrot Neophema pulchella and attractive diamond firetail Stagonopleura guttata may be glimpsed along the walking tracks or roadsides. 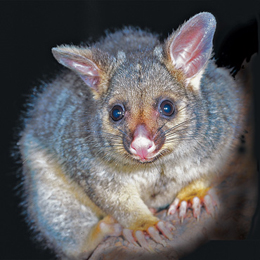 Mammals are best seen at dawn or dusk. Quietly shine a strong torch, preferably with a red filter, into the bush fringing the camping and day-use areas and you may glimpse a foraging possum, a grazing kangaroo, a probing echidna or a rummaging bandicoot. Remember never to shine torches directly into animals' eyes.

The common brushtail possum Trichosurus vulpecula is the most frequently seen possum. This possum is not usually shy and may even venture to steal food from unwary campers. Please do not feed them. Sugar Petaurus breviceps and feathertail gliders Acrobates pygmaeus may occasionally be seen frolicking in bushland fringing the camping and day-use areas.

Greater gliders Petauroides armillatus—the largest of all gliding possums—are similar to koalas Phascolarctos cinereus in that they live almost exclusively on eucalypt leaves and therefore live high in eucalypt trees. Koalas, greater and yellow-bellied gliders Petaurus australis are found in remote areas of Girraween National Park and are not often seen.

Larger mammals such as eastern grey kangaroos Macropus giganteus, red-necked wallabies Notamacropus rufogriseus and swamp wallabies Wallabia bicolor frequent the camping and day-use areas, but during the hotter parts of the day they like to venture into the shade of the woodlands for an afternoon siesta.

At sunset, a mix of wallabies and kangaroos can be seen in the grassy paddocks feeding and fighting in among their mobs. Shy male wallaroos Osphranter robustus with their dark grey, woolly fur may be seen along the roadsides.

The spotted-tailed quoll Dasyurus maculatus maculatus is an agile climber but spends most of its time on the forest floor hunting small birds and mammals. Living in safe dens among the rocks, it will emerge mainly at night to hunt. You may catch a glimpse of either the fast-moving copper-tailed skink Ctenotus taeniolatus or the eastern water skink Eulamprus quoyii darting between the rocks. Geckos are more secretive and often remain hidden under sheets of exfoliated granite or leaf litter. Some, like the tree dtella Gehyra versicolor or spotted velvet gecko Oedura tryoni, seek refuge up trees amongst leaves or under bark. At night the granite leaf-tailed gecko Saltuarius wyberba hunts for insects in dense leaf litter and debris.

The most commonly encountered snake is the shy red-bellied black snake Pseudechis porphyriacus, which may be seen basking in the sun on rocks and walking tracks. Eastern brown snake Pseudonaja textilis, bandy-bandy Vermicella annulata and yellow-faced whip snakes Demansia psammophis are less commonly seen. Snakes present little danger to people if left alone. Never approach snakes and never assume that the snake you see is non-venomous.

Known only from Bald Rock Creek, Bell's turtle Wollumbinia belli is Girraween's own unique reptile. More commonly found in the northern rivers of New South Wales, this short-necked turtle can be seen basking beside the creek or swimming in the deeper waterholes.

Major earth movements rocked eastern Australia between 200 and 400 million years ago. The continent collided with an oceanic plate and ocean sediments were thrust from offshore into the New England area. This ancient sediment is known as traprock or bedrock.

From the depths of the earth, hot molten rock called magma was forced upwards and invaded the traprock layer. Cooling slowly, the liquid magma solidified to form granite. Long before European settlement, Traditional Aboriginal custodians lived, hunted, gathered and prospered for countless generations in the Girraween National Park area. Although their legends and place names have been lost, camping places, rock markings, tools and marked trees remain in Girraween National Park as evidence of their life on the land.

Allan Cunningham first entered the Girraween area on the 26th June 1827, but the relatively inhospitable landscape made way for an early exit. In the 1840s Robert Ramsay Mackenzie was the first squatter to legally occupy land in the Girraween area. For decades he and others attempted logging, dairying and farming sheep, cattle, fruit and vegetables.

Dr Spencer Roberts (a medical practitioner in Stanthorpe) was a self-professed guardian of local populations of the superb lyrebird and the common wombat. Convinced that protecting the habitat of these two animals was vital for their long-term survival in Queensland, he put submission after submission to government for declaration of a national park.

In 1966, Napier Gunn offered the government his block of 52.4 ha and the two national parks were amalgamated to create today's Girraween National Park. Tom Ryan and Bill and Hock Goebel were employed as field staff and development of infrastructure began.

More information on the cultural and natural history of Girraween can be found at www.rymich.com/girraween/.