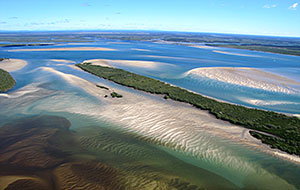 The Central Great Sandy Strait region of the marine park extends from River Heads in the north to Tinnanbar in the south, and includes the tidal reaches of the Susan River and lower tidal reaches of the Mary River. The small coastal townships of Maaroom, Boonooroo, Tuan, Poona and Tinnanbar are located adjacent to the western shoreline of this region.

The region is subject to complex tidal flow regimes and is influenced by freshwater flows through the Mary and Susan river systems (particularly during flood events). The tidal currents extending through the Great Sandy Strait from its northern and southern entrances meet in this region, creating a tidal interface in the general vicinity of Moonboom Islands. At this interface, the tidal currents from the north and south change their direction of flow. These hydrological influences result in conditions that are conducive for sediment deposition which has resulted in the development of extensive intertidal and submerged sand/mud banks across this region. These banks are well protected from major wind and wave energy, and support the largest area of coastal wetland vegetation (mangroves, saltmarsh and seagrass) in the Strait.

The Mary and Susan rivers are the most significant waterways feeding into this region. Both systems support extensive and diverse habitat and ecological values. For example, these rivers contain the highest mangrove species diversity in the Burnett-Mary region with all 11 locally occurring mangrove species represented1. The Mary River has a particularly large catchment area, and during major rain events conveys floodwaters that affect this and other large areas of the marine park. In addition to these major waterways, a number of smaller creeks feed into the region along its eastern and western shoreline and influence waterway structure, habitats and ecology within their immediate vicinity.

The dominant channel of the Great Sandy Strait is located toward the eastern side of the region, adjacent to K’gari (Fraser Island). In some locations, rocky ledges are present along the side of this channel that support localised rocky reef flora and fauna communities.

More generally, the region supports a diverse marine fauna community and is recognised as a nursery area for a range of fish and crustacean species. It is also extensively utilised by turtles, dugong, dolphins (including the Australian humpback dolphin) and internationally-significant numbers of migratory shorebirds1,2. A number of major shorebird roost sites are present, particularly along the western shoreline. A roost at Boonooroo is recognised as the largest shorebird roosting site in the southern Strait, at certain times supporting ~4,000 birds of mixed species, including the endangered eastern curlew2. The vulnerable Illidge’s ant-blue butterfly and water mouse have been recorded in upper intertidal habitats of Wanggoolba Creek, K’gari (Fraser Island) and the Mary and Susan rivers1,2,3,4,5.

The marine park management in this region utilises two zone categories. The majority of the region is within a conservation park zone which reflects the high conservation values present across this region. It also has five marine national park zones (MNP), four of which extend over mangrove islands (MNPs 19, 20, 21 and 22). The other marine national park zone (MNP18) protects an area of intertidal and subtidal banks on the eastern side of Bookar Island. These banks are extensively used by turtles and as a feeding location for shorebirds including critically endangered eastern curlews. To complement the zoning arrangements, the entire region is designated as a shorebird roosting and feeding area, which aims to protect shorebirds from unnecessary disturbance.

The designated Great Sandy Area extends over the conservation park zone and allows for the continuation of some fishing practices within this area that would normally be prohibited or limited within this zone category. Specifically, commercial net fishing is allowed to continue when a conservation park zone usually prohibits commercial netting other than bait netting. Recreational fishers are allowed to use up to three lines or rods per person when they would usually be limited to one line or rod per person.

Vessel go slow areas designated over Sheriden Flats adjacent to K’gari (Fraser Island) and over the nearshore areas between Boonooroo and Tinnanbar, protect turtle and dugong from boat strike and disturbance.

The Central Great Sandy Strait region is overlaid and/or complemented by additional management initiatives including:

Boating and fishing are the primary human uses of the marine park across the region. The main channel of the Great Sandy Strait is a highly-used navigation corridor for private and smaller commercial vessels. It provides a sheltered, alternative navigation route to the open ocean offshore of K’gari (Fraser Island) for vessels travelling along the coast. This channel, with its quality adjacent anchorages (e.g. Garry’s anchorage, Fig Tree Creek, Dream Islands), is also a pristine and sought after boating destination in its own right. A vehicular barge service operates between River Heads and a barge landing facility in Wanggoolba Creek on K’gari (Fraser Island).

The foreshore areas adjacent to the coastal townships dotted along the western boundary of the region are also focal points for recreational users of the marine park. Beach walking, swimming, paddle boarding and kayaking are popular activities along these foreshore areas.

Recreational fishers also target mud crabs, as well as a suite of estuarine fish species such as whiting, bream, flathead and estuary cod across this section of the marine park. Barramundi and threadfin salmon are species targeted within the Mary River during summer months, and mackerel are also captured in the region.

While large parts of the region are adjoined by national park and large forestry areas, there are other surrounding land uses, particularly adjacent to the western boundary. Intensive agriculture and grazing are carried out adjacent to the Mary and Susan rivers, and nodes of residential development are associated with the coastal townships and large forestry areas. The region generally, however, contains limited coastal infrastructure and development.

Many structures present within the marine park are located in the vicinity of the coastal townships along the western side of the region, and include public and private jetties, small groynes, bank protection works, moorings and stormwater outlets. Similar structures are also present in parts of the Mary and Susan rivers, and extend from some of the inhabited islands within the Strait (e.g. Stewart and Dream islands).

A barge landing and short navigation channel subjected to occasional maintenance dredging is present at Wanggoolba Creek, on the western side of K’gari (Fraser Island). The marine park zoning and declared Fish Habitat Area management within this region significantly limit the further development of these types of structures.