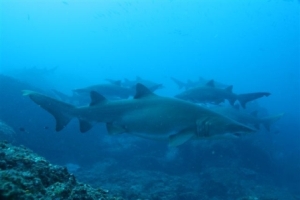 Queensland Parks and Wildlife Service (QPWS) manages the Great Sandy Marine Park through the Marine Parks (Great Sandy) Zoning Plan 2017. Great Sandy Marine Park is a State marine park. The zoning plan identifies different zones within the marine park, states the objectives for each zone and identifies the level of protection for the zone. The zoning plan lists the activities which can occur ‘as of right’, those that have entry and use provisions and those for which a permit is required.

Marine national park zones afford the greatest level of protection. They are identified on the zoning map as green. ‘Green zones’ are essentially ‘look but don't take’ zones, in which activities such as fishing and collecting are prohibited. No-take activities such as diving and photography are allowed.

Conservation park zones, identified on the zoning map as yellow, protect significant marine habitats. Commercial netting, trawling and harvest fishing are all prohibited in these zones. Restrictions apply to most other activities conducted in this zone.

Conservation park zones aim to provide a high level of protection for marine landscapes. Within the Great Sandy designated area some provisions regarding commercial and recreational fishing are different from those in the rest of the conservation park zone.

The light blue or general use zones aim to provide for conservation while providing opportunities for reasonable use. Most activities are permitted in the zone, but some require a permit.

Three designated areas provide for the conservation of the Mon Repos marine turtle rookery through the protection of foreshore, inshore and near shore areas.

This zone covers the area of beach and inshore habitat where large numbers of turtles nest. The objectives of the Mon Repos area are to protect turtles and their habitat and to minimise harm or distress caused to turtles by human activities or domestic animals. QPWS manages turtle watching through ticketed beach access.

Foreshore entry and use provisions apply from 15 October to 30 April the following year:

The turtle protection area aims to protect marine turtles and their habitat and minimise human impacts including trawling. Trawling is prohibited in the designated area from 1 November each year to 31 January the following year.

The Great Sandy area incorporates areas of conservation park zone in Baffle Creek, the Elliott, Burrum and Mary Rivers, Great Sandy Strait and Tin Can Bay Inlet. It was established to maintain important existing fisheries. In the Great Sandy designated area licensed commercial net, yabby and bloodworm fisheries can continue. Recreational fishers are permitted to use three lines or rods per person with a combined total of six hooks when fishing. When fishing outside this designated area, fishers must comply with the restrictions for the zone they are in.

Go slow designated areas are provided throughout the marine park. They aim to protect turtles and dugongs from injury, disturbance or death, especially in critical feeding and resting areas.

When a vessel is operating within go slow areas, it must be ‘off the plane’ (i.e. at a reduced speed) unless within navigational channels or defined transit lanes. Keeping vessels off the plane has proven to be an effective method of reducing the frequency of injuries and death to marine wildlife from boat strike.

Shorebirds are threatened by disturbance, habitat loss and degradation, and from introduced pests and predation. The purpose of the shorebird roosting and feeding area is to protect shorebirds, particularly migratory shorebirds and their habitat and to minimise harm and disturbance caused by human activities and domestic animals.

The objective for each fish trap area is to protect important Indigenous sites from damage caused by anchors and from the impact of excavating, modifying or removing material in these areas. Restrictions relate to anchoring and conducting any activity that may impact on the integrity and cultural values of the area. 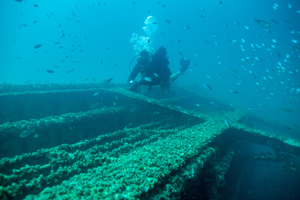 Diver at the Ex-HMAS Tobruk.

The objectives of the Ex-HMAS Tobruk area are to manage and maintain the wreck of the ex-HMAS Tobruk; to provide safe opportunities for public appreciation, understanding and enjoyment of the area; and to minimise the damage, disturbance or other interference to the wreck, marine species and other natural resources in the area. These objectives are met by limiting access to the area to persons with prior permission.

Four dive companies have permission to take divers into the Ex-HMAS Tobruk area. Dive tours can be booked from Hervey Bay or Bundaberg , or people that have their own boat and dive qualifications can book a mooring and dive permit to dive in the area.