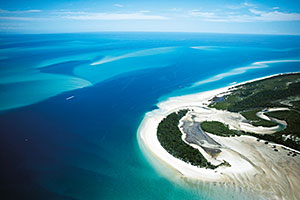 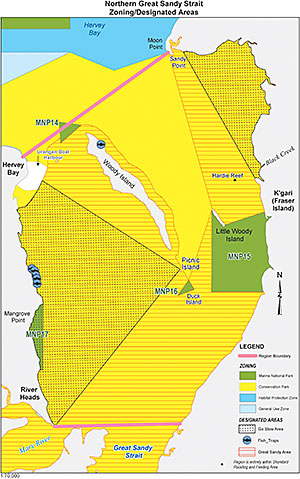 Woody Island and Little Woody Island are located within the northern part of this region. Both islands form part of the Great Sandy National Park and are prominent landforms within the region that significantly influence the structure of the waterway, its processes and habitat values. The Mary River outlets to the Great Sandy Strait at River Heads and is also a significant driver of the region’s habitats and ecological processes. This influence is particularly evident during flood events, when large volumes of fresh, turbid and nutrient rich floodwaters are channeled through this region and into Hervey Bay and further down the Strait. There have been 37 major flood events in the Mary River recorded during the last 150 years1.

Extensive intertidal flats are present between Woody Island and the mainland. These flats are relatively sheltered from wind and waves which has allowed the development of seagrass meadows in large parts of the area. The mainland foreshore is fringed with mangrove stands that are segmented by small drainage channels that feed onto the adjacent flats. The area around Mangrove Point provides essential habitat for basking green turtles at certain times of the year, with some of these turtles migrating to this area from as far away as New Caledonia2. The area’s calm waters and habitats are extensively used by these turtles to rest and rebuild their depleted energy reserves. Mangrove Point area is also a critical roosting and feeding area for shorebirds with over 30 species of shorebirds recorded in this area including the terek sandpiper, grey-tailed tattler, eastern curlew and whimbrels3.

Little Woody Island has a narrow fringe of mangroves along its northern shoreline with an intertidal rocky shelf that extends seaward from its northern and western shore. A narrow sand spit extends from the southern point of the island creating extensive intertidal flats along the entire eastern side4. Hard and soft corals, hydroids, gorgonians, sponges, sea pens and small worm shell reefs also occur in the waters around Little Woody Island, providing habitat for reef fish, invertebrates, turtles, dugongs, dolphins and other marine fauna6.

The dominant channel of the Great Sandy Strait is located toward the eastern side of the region, adjacent to K’gari (Fraser Island). Between this channel and K’gari (Fraser Island) are intertidal flats that are relatively narrow in the south of the region, but widen significantly to the north in the vicinity of Moon Point. The upper intertidal area is fringed with mangroves that extend into the many small creeks that outlet from K’gari (Fraser Island) and the lower flats are vegetated with substantial seagrass meadows. This entire foreshore area supports a range of fauna including dugong, turtles, shorebirds, fish, sharks and rays, however, the area between Black Creek and Moon Point is recognised as an area of particular ecological significance. The headwaters of the creeks flowing into this Moon Point area link to a patterned fen community within the Great Sandy National Park. Patterned fens are an elaborate network of pools surrounded by peat ridges. Along with similar areas in the Wathumba Creek headwaters and Cooloola Recreation Area, these are the only known subtropical patterned fen communities in the southern hemisphere7.

This entire region is extensively used by turtle, dugong and shorebirds, and also provides habitat for the northern population of the Australian humpback dolphin (Sousa sahulensis) (listed as vulnerable) and a number of other dolphin species.

Other maritime uses of this region include commercial tours, wildlife watching, sailing, diving, snorkeling and kayaking. A shipping lane extends through the Strait’s main channel that links to a cruise ship anchorage located adjacent to the Kingfisher Bay Resort. The beaches and nearshore areas to the south of the Urangan Boat Harbour and in the vicinity of the Kingfisher Bay Resort are popular locations for passive recreational uses (e.g. beach walking).

Two artificial reefs have been constructed in the region, the Roy Rufus and Hardie artificial reefs. The Roy Rufus artificial reef is located approximately one kilometre from the northeastern shoreline of Woody Island and was initiated by a local skin diving club in the late 1960s. It includes a wide range of reef structures (e.g. sunken barges, concrete rubble, concrete fish houses) distributed across an area of approximately 32 hectares. The Hardie artificial reef is located approximately two kilometres north of Little Woody Island and was established by the Queensland Government in May 2015. This reef includes 15 purpose-designed reef structures located in five clusters within an 80 hectare area. Both reefs are used for fishing and diving.

Commercial netting for mullet, whiting, garfish, tailor, bream, mackerel and flathead is undertaken in this region, particularly in the Moon Point area and to the south and west of Woody Island. Potting for mud and sand crabs is also a significant commercial fishing activity. Small scale commercial collection of coral and aquarium fish is also approved to occur in this region.

The region is popular with vessel-based recreational anglers. The rocky reefs and ledges around Woody Island are targeted for species such as grass sweetlip, cod, coral trout, tusk fish, Moses perch, bream and squire. The flats adjacent to K’gari (Fraser Island) are known for whiting and flathead, and the area towards Moon Point is popular with specialist anglers targeting golden trevally. Schools of pelagic species such as mackerel and tuna are targeted during the summer months in the northern part of the region, and more broadly recreational fishers target whiting, flathead, bream tailor, mud crabs and other inshore species throughout the region. Numerous parts of the region are popular with fishing charter operators.

The entrance channel for the Urangan Boat Harbour extends into the northeastern part of this region. The harbour is the base for a wide range of commercial fishing, tourism and recreational vessels (including Hervey Bay’s fleet of large whale watching vessels), and houses the area’s two largest public boat ramps. Further public boat ramp facilities and the ferry and barge servicing K’gari (Fraser Island) and the Kingfisher Bay Resort are located at River Heads. The presence of this significant boating infrastructure, its proximity to Hervey Bay, and the quality of this region as a boating and fishing destination make it an area of high vessel activity.

The western shoreline of this region is fringed by urban and rural/residential development, with the area around Urangan being a particularly densely populated area. The eastern shoreline is adjacent to K’gari (Fraser Island) and, with the exception of the area around the Kingfisher Bay Resort, is pristine and undeveloped national park and a World Heritage area.

Despite the significant level of development adjacent to the western shoreline of the region, there is relatively little private infrastructure extending into the marine park in this area. A few small, private boat basins are present along this shoreline. With the eastern foreshore being predominantly national park, the only significant structure along this foreshore is the jetty and barge ramp associated with the Kingfisher Bay Resort.

The marine park management in this region comprises two zoning categories. The majority of the region is within a conservation park zone which reflects the high conservation values present across this region. The region also has four marine national park zones (MNP). MNP14 is located at the northwestern end of Woody Island and protects the valuable coral and rocky reef habitat in that location. MNP 15 protects the coral and sponge habitats to the south of Little Woody Island, and an area of intertidal flats, and mangrove and seagrass habitat adjacent to K’gari (Fraser Island). MNP 16 extends to the southeast of Duck Island, protecting intertidal flats and an important shorebird roost site, and MNP 17 protects the intertidal foreshore south of Mangrove Point and its value as a shorebird and turtle habitat. To complement the zoning arrangements, the entire region is a designated shorebird roosting and feeding area.

The designated Great Sandy Area extends over most of the conservation park zone and allows for the continuation of some fishing practices within this area that would normally be prohibited or limited within this zone category. Specifically, commercial net fishing is allowed to continue when a conservation park zone usually prohibits commercial netting other than bait netting. Recreational fishers are allowed to use up to three lines or rods per person when they would usually be limited to one line or rod per person.

Five fish trap areas are designated along the mainland shore and one adjacent to Woody Island which aim to protect these culturally-significant sites from anchor damage.

Vessel go slow areas are designated over the flats between Woody Island and the mainland, and over the intertidal embayment between Moon Point and Black Creek, to protect turtle and dugong in these areas from boat strike and disturbance.

The Northern Great Sandy Strait region is overlaid and/or complemented by a range of additional management initiatives including: