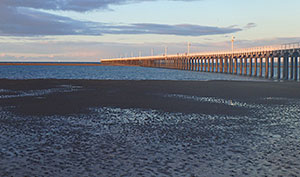 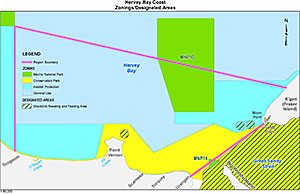 The Hervey Bay Coast region of the marine park extends from Toogoom in the west to Urangan in the east. The region includes the southern portion of Hervey Bay and spans the northern entrance to the Great Sandy Strait. The southern coastline is fringed by the regional city of Hervey Bay, and is the most intensely developed and populated area adjoining the marine park.

The coastal foreshore consists primarily of sandy beaches with wide intertidal flats. O’Reagan and Eli Creeks are the main estuarine wetland systems within the region. The large rocky headland of Point Vernon is a significant geological feature of the region and an area of ecological importance.

The region’s location at the southern end of Hervey Bay ensures that it is well protected from ocean swell and wave energy by K’gari (Fraser Island). Irrespective of this protection, the coastline within the area is still subject to active coastal processes that create ongoing erosion management and beach use/amenity issues along significant parts of the coastline. The tidal currents flowing in to, and out of, the Great Sandy Strait also strongly influence the coastal processes in southeastern parts of this region. In particular, these currents shape the area around Urangan, carrying sediment from the Mary River and depositing it on the large sand spit (Dayman Spit) near the Urangan Pier1.

The Hervey Bay Coast region supports extensive seagrass meadows in both its nearshore and offshore areas. Shallow sandbars and coffee rock ledges and outcrops are also common, particularly towards Moon Point. Coffee rock was formed when sand grains were cemented together by organic matter, and is a remnant of a time of lower sea level when the sand masses of K’gari (Fraser Island) and Cooloola extended further east. During that time period, the currently exposed coffee rock was further inland and part of the sand mass soil layers.

Mangrove and saltmarsh habitats are relatively limited within this region and predominantly restricted to O’Reagan and Eli Creeks, and to the tidal inlet on the western side of Moon Point.

The intertidal and subtidal rocky substrate in the vicinity of Point Vernon supports some of the marine park’s most prolific hard and soft coral communities2,3,4. Nine of the 11 species of Turbinaria coral known to occur in the Indo-Pacific region are present in this area, with some individual colonies likely to be more than a century old2,5. Diverse communities of reef flora and fauna are also present.

A number of important shorebird roosting and feeding habitats are located within the region, particularly at Moon Point, on the exposed sand bars offshore from Moon Point, and on the western side of Point Vernon. The roost sites at Point Vernon and nearby Gables Point Rocks support up to 2000 shorebirds at a time, including endangered eastern curlews and vulnerable beach stone curlews6.

Marine turtles and dugong are common in the western section of the region, with turtles often observed resting in the sheltered waters of Eli Creek. The area west of Point Vernon and the area adjacent to Moon Point are shark nursery habitats7.

The beaches from Point Vernon to Urangan are the heart of the Hervey Bay tourist area with public parks, restaurants, water sports hire, boat ramps, caravan parks, a surf lifesaving club, marina, and piers on or adjacent to the foreshore. Many tourism activities are undertaken in the nearshore areas including: jet-ski hire, recreational boating, beach going, snorkeling and kayaking. Eli Creek and Dundowran Beach are also popular locations for recreational activities such as paddle boarding, canoeing, kayaking, and beach walking.

Fishing is important use of this region of the marine park. The area is actively used by both land and boat-based recreational fishers. The Urangan pier (which is specifically excluded from the marine park), Point Vernon, the shallow reef off Scarness Beach, and the flats around Eli Creek are popular land-based fishing locations. At these locations, recreational fishers target a range of species such as bream, whiting, flathead, grunter and trevally. Boat-based anglers also target the same species but can also access reef species, and target pelagic species like queenfish, mackerel and golden trevally.

Commercial fishers net for mackerel, shark, trevally mullet, tailor, whiting and flathead, particularly in the eastern section of this region, and pot for sand crabs. Otter trawling is undertaken for prawns, scallops, bugs and sand crabs within the offshore general use zone.

Parts of the coastal fringe between Point Vernon and Urangan are managed via beach nourishment, and large sections of the foreshore in this area are protected with seawalls. Most structures and works that occur within the marine park are owned or undertaken by public entities.

The marine park zoning within this region is complex, reflecting the challenge of providing an effective management framework within an area that has significant natural values but is directly adjacent to a major regional city. A narrow strip of general use zone extends along the Hervey Bay foreshore from Pialba to Urangan, to satisfy the management requirements in the foreshore area. A conservation park zone extends over the nearshore waters adjacent to Hervey Bay, around Point Vernon and along the coastal fringe west of Point Vernon. Habitat protection zones and a general use zone cover most of the offshore areas. Fork Bank, a shallow sand bank and seagrass habitat important for dugong in the northeastern section of the region, is within a marine national park zone (MNP10). The zoning is complemented by three designated shorebird roosting and feeding areas at Point Vernon and Moon Point, which aim to manage shorebird disturbance in these important roosting and feeding locations.

The Hervey Bay coast region is overlaid and/or complemented by additional management initiatives including: