The artificial reefs are expected to attract an abundance of marine life. Members of the recreational fishing community were involved in the planning process.

In May 2015, the Queensland Government established Simpson Artificial Reef and Hardie Artificial Reef in the Great Sandy Marine Park. These reefs provide recreational anglers and divers with a range of exciting fishing and explorative opportunities. 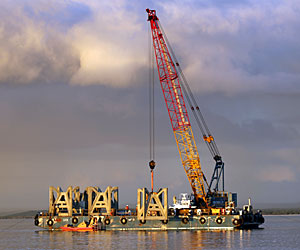 A crane lowers the artificial reef structures into position.

Construction of the reefs was a significant undertaking involving careful planning and development. Although the Queensland Parks and Wildlife Service (QPWS) was the lead agency responsible, a working group was established at the beginning of the project to guide the development of the program. The working group comprised of representatives from recreational and commercial fishing bodies, the tourism industry, conservation groups, traditional owners, QPWS and other government departments.

The working group provided advice on all major aspects of the program, including determining the purpose of the reefs, site selection, materials to be used, and ongoing management (including reef monitoring and enhancement).

Special thanks and acknowledgement to the members of the working group representing the following organisations:

During construction, fifteen reef structures were distributed over an 80ha area in five clusters, to a depth of 10-16m. Each cluster is made up of three reef structures.

During construction, fifteen reef structures were distributed over 160ha in five clusters, to a depth of 10–16m. Each cluster is made up of three reef structures. 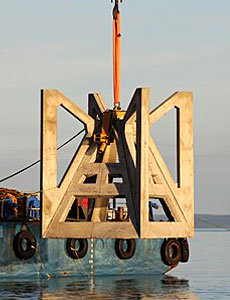 Creating the artificial reefs involved extensive research and planning, including mapping and analysis of physical, environmental, social and economic factors. The analysis informed decision making, including artificial reef location and material selection. Some of the factors considered included:

Each reef structure is made of steel reinforced with concrete. It has a large internal volume of 80 cubic metres, measures 4m x 4m x 5m and weighs 23 tonne. The combined modules form vertical relief and cellular spaces that create complex habitats and allow the reef structures to permanently recruit sustainable populations of target species, such as reef fish, pelagic fish and crustaceans.

For more information on the artificial reef program, please contact the department.