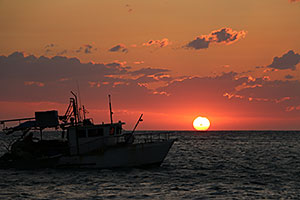 The Offshore region of the marine park extends along the eastern shorelines of K’gari (Fraser Island), Inskip Peninsula, Rainbow Beach and Double Island Point, and offshore to a distance of three nautical miles to the seaward boundary of the marine park. The entire area is a high energy environment, exposed to open ocean wave action1. No rivers or significant estuaries are present in the region.

The marine park in this region is influenced by the most extensive longshore sand transport system in the world, which has created and maintains K’gari (Fraser Island), as the largest sand island in the world2. Rocky headlands at Waddy Point, Middle Rocks, Indian Head and Double Island Point are key geological features and provide key anchor points for the K’gari (Fraser Island) and Cooloola sand masses.

The subtidal areas surrounding these rocky headlands also support important reef ecosystems, as do a number of rock pinnacles situated offshore from Double Island Point (i.e. Wolf Rock, The Pinnacles and Round Rock).

Scattered coffee rock outcrops and reefs occur along the region and provide localised areas of structural diversity in this sand dominated area. Coffee rock was formed when sand grains were cemented together by organic matter, and is a remnant of a time of lower sea level when the sand masses of K’gari (Fraser Island) and Cooloola extended further east. During that time period, the currently exposed coffee rock was further inland and part of the sand mass soil layers.

Between Inskip point and K’gari (Fraser Island) is the southern entrance to the Great Sandy Strait. Significant tidal exchange between the open ocean and the Strait occurs via this passage, making it both a physically dynamic location and a biologically important migration corridor.

More broadly, this region of the marine park and its adjacent offshore area have high biological productivity. The continental shelf meets with the East Australian Current in this area, creating eddies which drive cold, nutrient-rich waters from depths greater than 200m up to the water’s surface3. This upwelling supports significant algal blooms, providing the basis for an extensive food web3,4. The waters in this area are important spawning grounds for a number of pelagic fishes such as tailor, sardine, round herring and Australian anchovy that migrate from the south and spawn in the nearshore waters between Indian Head and Waddy Point3,5. The area also supports aggregations of species such as toothed whales, dolphins, squid, sharks, billfish and tuna, and is a primary residency region for juvenile white sharks. Satellite tagging indicates white sharks reside off K’gari (Fraser Island) for up to four months over spring3,6.

Wolf Rock, in the south of the region, is a key aggregation location for the critically endangered grey nurse shark7. Manta rays are also common visitors to the Wolf Rock area. The region’s shoreline is utilised by large numbers of resident and migratory shorebirds, with counts of up to 3,900 individuals recorded8. Grey plovers, common terns and little terns are present in internationally-significant numbers along the south-eastern side of K’gari (Fraser Island)8.

The Great Sandy National Park (including both its K’gari (Fraser Island) and Cooloola components) is one of the most highly-visited national parks in Queensland, attracting large numbers of local, national and international visitors. The beaches that fringe the National Park are partially within the marine park, and are traversed as the primary vehicle access corridors. However, for many visitors (both private and on organised tours) these beaches are not simply used as access corridors. Beaches are the primary attraction for visiting the area and are highly-valued as four-wheel driving, fishing, surfing and passive recreation locations.

The coastal town of Rainbow Beach is the most significant population centre adjacent to this region of the park. It is a popular tourism destination with visitors drawn to the lifesaver-patrolled surf beach, where swimming, surfing, fishing, paddle boarding and beach walking are popular. Rainbow Beach is also protected by shark nets and baited drum lines as part of the Queensland Shark Control Program. The town is also the base for a number of the tourism businesses that operate in the marine park (e.g. eco tours, tag-along four-wheel drive tours, fishing charters, dive charters to Wolf Rock, surf schools).

Fishing is a key activity conducted in this region of the marine park. The ocean beaches of the region are extremely popular with recreational beach fishers. Tailor is a particular target species during the period from July to November, with other species such as whiting, dart, bream and flathead targeted year round. The nearshore coffee rock outcrops and the rocky headlands in this region (Waddy Point, Indian Head and Double Island Point) are targeted by vessel-based recreational fishers for species such as grass sweetlip, trevally, cod, parrot and snapper. Snorkelling for crayfish also occurs on these shallow coffee rock outcrops. Mackerel and tuna often form feeding schools on the surface beyond the surf zone and are popular targets for recreational anglers.

Areas of the ocean beach along the eastern side of K’gari (Fraser Island), and from Inskip Point south to Double Island Point are used by commercial beach net fishers who target mullet, tailor and whiting. Otter trawlers target prawns in the waters along the offshore fringe of the region. Some commercial potting for spanner crabs is undertaken in the northern part of this region, and commercial line fishing for reef and pelagic species also occurs within this region.

The exposed nature of the coastline and the limited extent of adjoining private land has resulted in this region of the marine park subjected to minimal levels of coastal development.

The marine park management in this region utilises five zone categories. The offshore area of the region is predominantly general use zone. The nearshore areas, with the exception of a small area surrounding Middle Rocks, are managed as either habitat protection or conservation park zones. Middle Rocks and its surrounding area support a high value nearshore reef ecosystem with intertidal rock pools and are protected within a marine national park zone (MNP13). A block of habitat protection zone is present adjacent to the southern end of K’gari (Fraser Island), primarily to exclude trawling from this area with the aim of protecting fauna (e.g. juvenile prawns) migrating from the Sandy Strait. A further marine national park zone (MNP 29), surrounded by a buffer zone, is present around Wolf Rock to recognise and protect the value of this area to grey nurse sharks and as an important reef habitat.

To complement the zoning arrangements in the Double Island Point and Wolf Rock areas, a grey nurse shark area has been designated over Wolf Rock, which applies specific management to diving in this area to minimise disturbance of the grey nurse sharks.

A designated vessel go slow area has been established around Double Island Point to minimise the risk of boat strike and disturbance of wildlife while they are using or moving through this area.

The Offshore region is also overlaid and/or complemented by a range of additional management initiatives including: