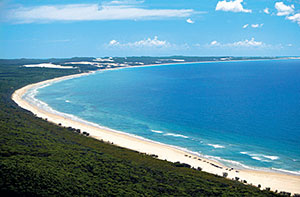 The Central and Eastern Hervey Bay region of the marine park extends from Moon Point in the south to the northern boundary of the marine park. It includes the central, eastern and northeastern areas of Hervey Bay and extends to the western shoreline of K’gari (Fraser Island). Hervey Bay is often considered to be part of the Great Barrier Reef lagoon with its opening pointing directly north and K’gari (Fraser Island) providing shelter from ocean swells1.

Break Sea Spit extends to the north of Sandy Cape and is fed by the most extensive longshore sand transport system in the world. Beyond the marine park boundary, Break Sea Spit intercepts the continental shelf where northerly moving sand spills into the deep ocean. The bay represents the drowned Mary River valley which was flooded when sea levels rose after the last glacial period2. It is a relatively shallow embayment, generally less than 30 metres deep. Some areas along the alignment of the ancient Mary River channel (known as a paleo-channel) that extends in a northerly direction through the middle of the bay reach depths of around 50 metres (e.g. Twenty-five Fathom Hole and the Southern Gutters)2.

There are no major river systems within this region. However, there are a number of small creeks present on the western shoreline of K’gari (Fraser Island). The most significant of these are Wathumba Creek and Coongul Creek. Both creek systems contain high quality estuarine habitats, and the configuration of their mouths are regularly modified by the active coastal processes in the area. The headwaters of Wathumba Creek link to a ~4400 year old patterned fen community in the Great Sandy National Park. Patterned fens are an elaborate network of pools surrounded by peat ridges. Along with similar areas at Moon Point and in Cooloola Recreation Area, these are the only known subtropical patterned fen communities in the southern hemisphere3.

Within the bay, the seafloor generally consists of soft, sand dominated substrate, which supports large seagrass meadows. Areas of consolidated substrate (coffee rock outcrops and ledges) are also scattered through the region, particularly in the vicinity of Rooney Point. Coffee rock was formed when sand grains were cemented together by organic matter, and is a remnant of a time of lower sea level when the sand masses of K’gari (Fraser Island) and Cooloola extended further east. During that time period, the currently exposed coffee rock was further inland and part of the sand mass soil layers.

The region is important for whales, dugong, turtles and shorebirds. Humpback whales utilise the protected waters of Hervey Bay and this region of the marine park specifically as a key stopover location during their annual southern migration. In 2015, the estimated migratory population of humpback whales on the east coast of Australia was approximately ~24,5007, with half expected to visit this area of Hervey Bay. While humpbacks are the iconic visiting whale species, a number of other species have been recorded in this region of the park, such as Bryde’s whales, sperm whales, pilot whales, pygmy sperm whales, southern right whales and dwarf minke whales.

Dugong make repeated regular winter migrations of up to 80 kilometres from Hervey Bay to Sandy Cape in search of warmer waters or seagrass. They have been tracked making this migration directly through the centre of Hervey Bay8, demonstrating the broad usage of the region by this species. Fork Bank is a congregation area for dugong and turtles. The shallow water, sand banks and seagrass habitat in this area provide a key resting, transit and feeding area for these species. Green and loggerhead turtles also utilise the nearshore area between Rooney Point and Sandy Cape as a key feeding, breeding and courtship site.

Shorebirds are common along the western shoreline of K’gari (Fraser Island) and a number of recognised roost sites are present in this area, particularly within and around Coongul and Wathumba Creeks. Coongul Creek forms part of the designated shorebird roosting and feeding area that aims to protect shorebirds from disturbance and habitat loss.

The reliable annual return of migratory humpback whales to this region has made it the focal point for Hervey Bay’s whale watching tourism industry. Other forms of ecotourism also occur in the region, such as scenic flights and general wildlife tours. Numerous parts of the region are popular with fishing charter operators, and cruising vessels including bare boat charters.

The ex-HMAS Tobruk was recently scuttled to create a unique dive site in this region of the marine park. The wreck is approximately 1.5 nautical miles northeast of Twenty-five Fathom Hole. Vessel access to the site is restricted to permit holders only.

Along with eco-tourism, fishing is the other major activity conducted in this region of the marine park. The western beaches of K’gari (Fraser Island), in particular the areas around Wathumba and Coongul Creeks, are popular with recreational fishers who access the area by vessel or four wheel drive vehicle. These recreational fishers target whiting, flathead, tailor, trevally and bream. Various species of mackerel, trevally (including golden and giant trevally), tuna, queenfish, cobia and marlin are targeted by specialist recreational anglers. Species such as snapper are also targeted over areas of hard reef within this region.

The offshore waters in the Bay are an important trawl area where commercial otter trawl fishers target prawns, scallops, bugs and sand crabs. Commercial net fishers target small mackerel within the bay and a range of species such as whiting, mullet, trevally, flathead, tailor along the western K’gari (Fraser Island) coast. Potting for spanner crabs and sand crabs, and line fishing for reef species (over areas of hard structure) and pelagic species (e.g. spotted mackerel) are also undertaken commercially in this region.

The majority of the region is managed as general use zone. The nearshore areas along the K’gari (Fraser Island) coastline are within a habitat protection zone, and three marine national park zones (MNP) are present in the region. MNP10 over Fork Bank and MNP12 located on the western side of Break Sea Spit protect important dugong and turtle values. MNP11 protects the gastropod reef area off Rooney’s Point. Conservation park zones are present over Wathumba and Coongul Creeks and Twenty-five Fathom Hole and the Southern Gutters, within the Mary River paleo-channel.

A seasonal designated vessel go slow area applies in the nearshore waters between Rooney Point and Sandy Cape during a period of high turtle activity in the area, from 15 October to 30 April, and aims to reduce the risk of vessel strike.

The Central and Eastern Hervey Bay region is overlaid and/or complemented by a range of additional management initiatives including: