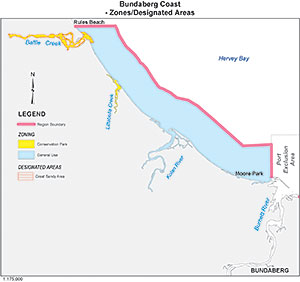 Much of the nearshore waters and coastline are exposed to open wave action, resulting in wetland communities (such as mangroves and seagrass) being largely restricted to the protected estuarine systems of Baffle Creek, Littabella Creek and Kolan River1. The coastal and riverine processes in the region combine to make the mouths of some of these waterways highly mobile and dynamic areas. For instance, the mouth of Littabella Creek has shifted approximately two kilometers south over the past 30 years, and significant changes around the Kolan River mouth have occurred during the last 20 years2,3.

Baffle Creek is one of the few remaining river systems within southern Queensland with a flow regime that is not modified by the presence of a major dam, weir or other form of waterway barrier. This, combined with its size, habitat diversity and low level of disturbance, make this waterway an area of high conservation value, and an important ‘benchmark’ system against which rivers that have regulated flows can be compared2.

The Bundaberg Coast region is recognised for its important shorebird nesting and feeding habitats, particularly for species such as little terns, eastern curlew, grey-tailed tattler, red-capped plover and pied oystercatcher, around the mouths of Baffle Creek, Kolan River and Littabella Creek3,4. Key turtle nesting and inter-nesting (preparing eggs prior to coming ashore) habitats are located in the region, particularly towards the southern end5. The area is also recognised for its diverse fish populations and important fish habitat values3.

The areas adjacent to Moore Park and the Miara caravan park are key locations in the region for nearshore recreational activities such as swimming and kayaking. Beach driving along the open beaches also occurs in some parts of this region.

Boating and fishing are the primary human uses of this region within the marine park. Commercial fishers net for mullet, mackerel, bream, whiting, flathead and trevally, and pot for mud crabs, particularly in the Kolan River and Baffle Creek. Beam trawling for banana prawns occurs in the Kolan River, and otter trawling for prawns, scallops, bugs and sand crabs occurs along the offshore fringe of this region. Recreational fishers target many of the same fish and crab species as the commercial fishers. Some waterways within the region, particularly Baffle Creek, are popular with specialist anglers targeting species such as mangrove jack, threadfin salmon and barramundi.

The region’s waterways contain a range of small scale, predominantly private structures such as jetties, boat ramps and revetments associated with adjacent land uses. A small number of larger commercial structures also extend into the marine park, such as the water inlet and outlet structures associated with the prawn farms at Baffle and Littabella Creeks. While intensive agriculture is conducted in the area surrounding the Kolan River and Littabella Creek, the region is generally fringed by low intensity land uses.

With the exception of Baffle and Littabella Creeks, the remainder of this region is managed as a general use zone. Baffle and Littabella Creeks are conservation park zones, recognising the high conservation values provided by these two waterways. Baffle Creek also forms part of the designated Great Sandy Area. This designated area allows for the continuation of some fishing practices that would normally be prohibited or limited within a conservation park zone. Specifically, commercial net fishing is allowed to continue when commercial netting other than bait netting would usually be prohibited. Recreational fishers are allowed to use up to three lines or rods per person when they would usually be limited to one line or rod per person.

This Bundaberg Coast region is overlaid and/or complemented by additional management initiatives including: