Discover the beauty and diversity of Springbrook National Park through the virtual ranger guided tours. Get up close and personal with some of the park’s unique animals through the Augmented Reality experiences. It’s like having a personal ranger in the palm of your hand. Photo credit: © Jen Bartlett

How does a ‘sleepover’ in Jurassic Park (minus the scary dinosaurs) sound? Photo credit: © Sarah Haskmann 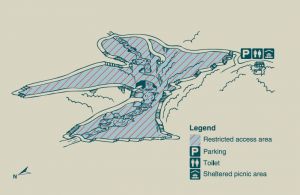 Since March 2008, the creek and creek bank at Natural Bridge section of Springbrook National Park has been a restricted access area. We appreciate your co-operation in protecting this special area and being responsible for your safety.

Why close access to the creek and creek bank?

Restricted access fencing has been installed between the upper and lower bridges of Cave Creek. Swimming in the creek and access to the creek bank is prohibited—penalties apply!

There are two alternatives for swimming near Natural Bridge:

Queensland Parks and Wildlife Service rangers patrol Natural Bridge and do compliance and permit checks on commercial tours. Persons found within the restricted access area will be fined under the Nature Conservation (Protected Areas Management) Regulation 2006.

Natural Bridge cave is geologically significant due to the erosion process involved in its formation. It contains one of Australia’s largest glow-worm colonies, attracting more than 200 visitors a night.

Before 2000, access to Natural Bridge cave and Cave Creek was unrestricted. Many people swam in the cave and jumped through the hole.

During 2000, the upper section of Cave Creek was declared a restricted access area under the Nature Conservation Act 1992. This prohibited access to the cave roof and stopped the practice of jumping through the roof.

The park now predominantly attracts families, bushwalkers and sightseers interested in the park’s geological and natural features. To further protect the park’s natural values and for public safety, all access to Cave Creek is prohibited.

Restricted access fencing has been installed between the upper and lower bridges.