The long-term plan for managing and conserving the natural and cultural values of Mulgumpin’s protected areas, including the national park and recreation area, is currently under review. Read more about this process and how you can keep informed. Photo credit: © Tourism and Events Queensland

Find out more information and background about native title on Mulgumpin held by the Quandamooka People, the island’s traditional owners and custodians.

Permits to drive or camp in Mulgumpin’s recreation area are booked and managed through Mulgumpin Camping. Photo credit: © Bianca Holderness The island is an important recreation area for people who live in the Brisbane region, receiving more than 170,000 visitors a year.

Mulgumpin (Moreton Island) has a complex and fragile ecology with many plants and animals adapted to the low nutrient sandy soils and 'tea-tree'-stained acidic waters. The island's shape is always changing in response to the ocean currents and winds. The development of Mirapool—from a series of islands to its current form as a large lagoon—is a good example of how quickly the sand environment can change.

Mulgumpin (Moreton Island) represents one of the most outstanding records of continuing geological, geomorphological and biological processes that formed the sand island masses of South East Queensland. The natural dune processes of erosion, accretion and stabilisation by vegetation and the development and infilling of lakes and swamps has continued relatively undisturbed by human activities.

Mount Tempest, reaching 285m, is thought to be the highest stabilised sand dune in the world. Mulgumpin (Moreton Island) is also currently the only area in the region where Pleistocene dunes have been naturally destabilised and are being actively reworked. Examples of this are seen at The Desert south of Tangalooma and the Big and Little Sandhills.

The only rock on the island is the rocky headlands in the Cape Moreton–North Point area. These are mainly of the Bundamba Group (siliceous sandstone, conglomerate, minor siltstone and shale) with Undifferentiated Volcanics (mainly rhyolite). These landforms support distinct vegetation types which are uncommon and of conservation concern in South East Queensland.

Mulgumpin (Moreton Island) is the least disturbed, large coastal sand island in South East Queensland and has considerable value in its preservation of extensive stands of many of the regionally significant coastal lowland vegetation communities. These include communities such as mangroves, melaleuca swamps, sedgelands, heath and eucalypt woodlands and open forests. The distribution of these communities is related to the age of the underlying sand deposits, the depth of the watertable, nutrient levels, degree of wind and sun exposure and the age of the community.

Mulgumpin (Moreton Island) is one of the least polluted and least disturbed coastal environments along the Queensland – New South Wales coast. Most of the island has been included in the internationally recognised Moreton Bay Ramsar Site in recognition of its important wetland sites: the salt marsh, tidal flats, sandy beaches and perched lakes. This relatively pristine environment with a variety of habitats supports some interesting and valuable species.

Moreton Bay and the sand islands provide a vital feeding and resting point for over 50,000 migratory waders making their annual journey from the Arctic and sub Arctic regions between September and April each year. The eastern curlew, the little tern and the grey tailed tattler are among some of the uncommon migratory birds dependent on the Bay environment during their non-breeding season. The Mirapool Lagoon area and the Heath Island area of Mulgumpin (Moreton Island) are considered vital feeding and roosting sites for waders.

Over 180 species of birds have been recorded from the island including seabirds, waders, forest dependent birds and birds of prey. Thirty-one species of migratory birds protected under international agreements (JAMBA, CAMBA) have been recorded on Mulgumpin (Moreton Island). The pied oystercatcher and the red-capped plover are two of the more common resident waders of Mulgumpin (Moreton Island).

The osprey, which breeds on the island, is considered regionally vulnerable in South East Queensland up to Fraser Island, and is listed in the Bonn Convention on the conservation of migratory species of wild animals. 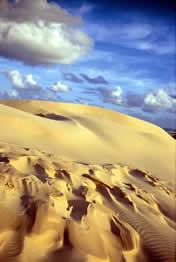 Mulgumpin meaning 'place of sandhills' is the Aboriginal name for Moreton Island. Mulgumpin lies within the area referred to as Quandamooka, which is commonly defined as the region and indigenous people of Moreton Bay and its islands. The indigenous people of Quandamooka include the Ngugi (Moreton Island), and the Gorenpul and Nunukal clans (North Stradbroke Island).

Extensive site surveys have established that the Ngugi people lived on Mulgumpin (Moreton Island) on a permanent basis maintaining a marine-based lifestyle for over 2,000 years. Fish, shellfish, dugong, turtle and crustaceans formed a major portion of their diet, which was supplemented by bungwall fern (Blechnum indicum), midyim berries (Austromyrtus dulcis), pandanus and honey.

Their connection with the land and sea has a strong spiritual basis and some animals are strongly linked with traditions and customs.

Archaeological sites on the island are important to the Ngugi descendants as a reflection of their heritage. Numerous cultural sites have been recorded over the island and include shell and bone scatters, large shell middens and a stone quarry.

Captain Cook made the first recorded European sighting of Moreton Bay and Mulgumpin (Moreton Island) in 1770, followed by Matthew Flinders in 1799. European settlement began in 1848 when the Amity Point pilot's station on Minjerribah (North Stradbroke Island) was relocated to Cowan Cowan, Moreton Island. The move was due to several shipping disasters through the South Passage.

The northern end of Mulgumpin (Moreton Island) became the main passage to Brisbane. In 1857, convicts built Queensland's first lighthouse from local sandstone at Cape Moreton. These days the light is fully automated.

A telegraph line was built in the 1890s to service the Cape Moreton lighthouse and link Minjerribah (North Stradbroke Island), Kooringal and Bulwer with the lighthouse. In 1952 the line was abandoned, but relics of the old line are still visible along the Bulwer–North Point Road and the Telegraph Road.

A further signal light was built at Cowan Cowan in 1874, followed by a lighthouse in 1899.

As the Brisbane settlement grew, shipping activity increased, which led to many shipwrecks and much loss of life at sea. Graves of some of those who perished remain on the island today.

Sandmining exploration began on the island in 1947. After successful lobbying the last mining leases were surrendered in 1992 and the lands then added to the national park.

Major coastal defence bases were located on Mulgumpin (Moreton Island) during the world wars. In World War I, Cowan Cowan Point provided the main defence base. Very little evidence of this base remains due to natural sand movement along the west coast of the island.

World War II saw two large defence battery-complexes built—one at Cowan Cowan and the second at Toompani beach (the Rous Battery). During this war, the Rous Battery track, Middle Road, and a naval base and jetty were built at Tangalooma. The remains of the batteries and a variety of other relics are still present and contain items of historic interest.