The Cape Tribulation section of Daintree National Park (CYPAL) is where the rainforest meets the reef. Photo credit: © Tourism and Events Queensland

Celebrating and sharing the unique and diverse culture of the Eastern Kuku Yalanjiwarra people, who are proudly caring for Jalun (reef) and Madja (rainforest). Photo credit: © Tourism and Events Queensland

Be inspired: Experience a feast for your senses at Mossman Gorge

If you’re looking for a cool change in the rainforest that both you and the kids will enjoy, along with an opportunity for a unique cultural experience, look no further than Mossman Gorge in Daintree National Park (CYPAL). Photo credit: Maxime Coquard © Queensland Government

Be inspired: Explore the tropics in ‘the Wet’—our top 3 ‘must dos’

Be inspired: Grab your boots and adventure outdoors—7 short walks around Cairns and Townsville

‘These boots are made for walkin’ and that’s just what they’ll do…’ If you like the sound of rambling through ancient rainforests, wandering along palm-fringed beaches and clambering around tropical islands, not to mention, spotting awesome wildlife, read on! Photo credit: Maxime Coquard © Queensland Government 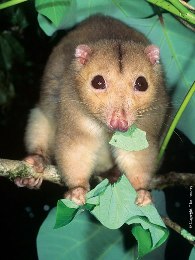 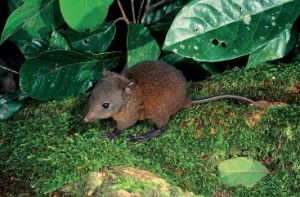 The musky rat-kangaroo is often active during the day.

Daintree National Park (CYPAL) is home to a large number of endemic animals—those found nowhere else in the world. They are comprised of a unique mixture of ancient species evolved from Gondwanan ancestors and more recent arrivals from Asia.

Of the five ringtail possum species found in North Queensland rainforests, the Daintree River ringtail possum Pseudochirulus cinereus is almost wholly restricted to the Daintree catchment. In the park this species is found only in upland rainforest on Thornton Peak and the upper reaches of the Daintree and Mossman rivers. Once considered a light-coloured form of the Herbert River ringtail possum, commonly found throughout the Atherton Tableland, it was described as a distinct species in 1989. Striped possums Dactylopsila trivirgata are quite common throughout the park, particularly in the coastal lowlands north of the Daintree River, although to see one while spotlighting requires a mixture of luck and know-how.

Although many mammals living in the park are nocturnal and therefore difficult to observe, you may be lucky to see a few creatures by day. The musky rat-kangaroo Hypsiprymnodon moschatus is often active during the day and may be glimpsed foraging on the forest floor. This small creature looks similar to a bandicoot, but has dark, chocolate brown fur. It is the most primitive member of the kangaroo family and is believed to have remained relatively unchanged over the last 20 million years.

Bennett's tree-kangaroo Dendrolagus bennettianus is found only in the lowland and upland rainforests north of the Daintree River. Like all kangaroos and wallabies, tree-kangaroos have evolved from possums. Deserting its life on the ground, this secretive animal has reverted to an arboreal existence, feeding and sleeping among the treetops, although it will often descend to the forest floor in search of fallen fruits or to move between isolated trees. South of the Daintree River the more widespread Lumholtz's tree-kangaroo Dendrolagus lumholtzi can be found in rainforest, usually at an altitude above 500m.

The spotted-tailed quoll (northern subspecies) Dasyurus maculatus gracilis is an endangered species found in the park. This cat-sized marsupial is one of Australia's few purely carnivorous animals. Their range covers both upland and lowland rainforests and the tall eucalypt forests found on the western slopes of the Windsor and Carbine tablelands. They have occasionally been observed along the coast from the Daintree River to Cape Tribulation.

The giant white-tailed rat Uromys caudimaculatus is one of Australia's largest rodents, with a body length up to 380mm. Often regarded as a mischievous pest, it will boldly raid homes and camp sites, chewing its way into tents, food containers and even electrical wiring. This nocturnal creature is an efficient tree climber—it can easily climb to the top of a coconut tree to feast on the large nuts. With incredible persistence, it is able to chew a neat round hole through the tough husk and hard shell to eat the soft flesh inside. 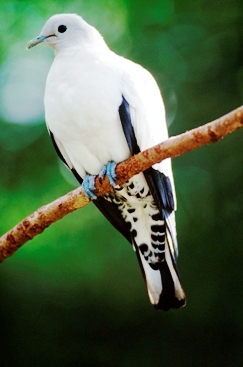 One of Cape Tribulation's most fascinating birds is the southern cassowary.

The magnificent buff-breasted paradise-kingfisher Tanysiptera sylvia travels from New Guinea during the warmer months to breed in North Queensland. It is easily recognised by its beautiful blue back and wings, orange underside and very long white tail.

Another bird that returns from New Guinea to breed each year is the pied imperial-pigeon Ducula bicolor. These black and white pigeons arrive in large numbers around August to enjoy an abundance of fruits found in the lowland rainforest.

Throughout the year, the ground-dwelling orange-footed scrubfowl Megapodius reinwardt is commonly seen scratching for food on the forest floor. They can sometimes be seen building one of their enormous nests—huge compost mounds of leaf litter, sticks and dirt in which their eggs are incubated.

One of the park's most fascinating birds is the large, flightless southern cassowary Casuarius casuarius johnsonii. At 2m tall, these birds are extremely important to the health of the rainforest. They are the only animal capable of eating the largest rainforest fruits and dispersing their seeds over vast distances. Sadly, these magnificent creatures are threatened by habitat loss, speeding motorists and dog attacks.

The landscape of Daintree National Park (CYPAL) began to form under the sea about 400 million years ago, when Australia was still part of the great super-continent, Gondwana. Ancient rivers carried sediments to the coast, situated more than 100km west of its present position.

Eventually the movement of the earth's crust lifted these marine deposits, raising a vast area of metamorphic and granite rock far above the sea levels of today. Subsequent erosion of the softer metamorphic rock has exposed the harder underlying granite and resulted in the dramatic, mountainous coastal ranges we see today.

For more than 200 million years successive climate changes have resulted in the contraction and expansion of rainforest throughout much of Australia. During the drier ice ages, many plants and animals did not adapt to the new conditions and were driven to extinction. But in Daintree National Park (CYPAL) and the surrounding area, cloudy wet mountaintops and deep moist valleys provided refuge from these climatic fluctuations for many life forms. Those that survived have evolved into the plants and animals in the park today, many of which have changed very little since those ice-age ancestors.

Most of the world's 19 primitive plant families are found in Daintree National Park (CYPAL) and the surrounding area.

Sheltering in tiny refuges during the drier ice ages were several species of plants, including a primitive she-oak Gymnostoma australianum. This pine-like tree is the only remaining species in the Gymnostoma group of plants in Australia and is now restricted to very isolated pockets north of the Daintree River. The genus was once widespread throughout Gondwana, and its relatives are still found in parts of the Pacific region and south-east Asia.

The endangered Noahdendron nicholasii is confined to a small area on the banks of a few narrow creeks. This understorey tree was first discovered in 1981 and has not been found anywhere else in the world. This plant produces a beautiful pink flower spike made up of numerous strongly scented blossoms.

Deep in the lowland rainforest near Cape Tribulation is the unique Idiospermum australiense. An isolated stand of this ancient tree was re-discovered in 1972 and has since been found in only a few other areas in the Wet Tropics World Heritage Area. It is a true relict and the only member of the Idiospermaceae family (the word Idiospermum is a reference to its strange fruit, which has four or even five cotyledons—the primary leaves of seedlings—where most plants have only one or two).

Many of these ancient plants provide an insight into the evolution of flowering plants, which began about 120 million years ago.

Daintree National Park (CYPAL) is in the Wet Tropics World Heritage Area (WTWHA). Proclaimed in 1988, the WTWHA extends for about 450km between Cooktown and Townsville. Vegetation in the area's 900,000ha includes tropical rainforest, open eucalypt forests, wetlands and mangrove forests. The WTWHA meets all four natural criteria for World Heritage listing. These criteria recognise the area's exceptional natural beauty and the importance of its biological diversity and evolutionary history, including habitats for numerous threatened species. The WTWHA also has cultural significance for Aboriginal people who have traditional links with the area and its surrounds.

The Eastern Kuku Yalanji Aboriginal people are the Traditional Owners of this area. Their country extends from near Cooktown. For the Eastern Kuku Yalanji people many natural features of the landscape have spiritual significance including Wundu (Thornton Peak), Manjal Dimbi (Mount Demi), Wurrmbu (The Bluff) and Kulki (Cape Tribulation).

A rich array of plants and animals provided reliable food for the Eastern Kuku Yalanji people as they travelled seasonally throughout the area. The coastal lowlands were particularly productive and could sustain a relatively large population.

Understanding the weather cycles and the combination of vegetation types allows the Eastern Kuku Yalanji people to find a variety of food throughout the year—when jilngan (mat grass) is in flower, it is time to collect jarruka (orange-footed scrubfowl) eggs and when jun jun (blue ginger) is fruiting, it is time to catch diwan (Australian brush-turkey). Many tree-dwelling animals were also hunted including murral (tree-kangaroos), yawa (possums) and kambi (flying foxes).

The headland at Cape Tribulation was given its European name by Lieutenant James Cook after his ship, Endeavour, was holed on a reef in the area in 1770. Cook wrote 'I named… the north point Cape Tribulation because here began all our troubles'.

Gold miners, explorers, timber-cutters and farmers have all made their mark on the area. In 1873 George Elphinstone Dalrymple led the first exploration deep into the Daintree River valley, naming the river after Richard Daintree, a prominent geologist and friend.

During the voyage Dalrymple noted extensive areas of land suitable for agriculture but more importantly, he found huge stands of red cedar. Soon after, hordes of timber-getters arrived with the prospect of growing rich from 'red gold'. At the time, these much-prized trees had almost disappeared from most southern forests and within 10 years the Daintree suffered the same fate. Many settlers left disheartened, but others stayed, determined to make a living by raising cattle or growing crops such as rice, vegetables, coffee, maize and sugar. While crops grew well on the river flats, flooding, pests, disease and the difficulty of getting to market made life very hard.

In the 1880s, farming expanded along the coastal belt and extensive areas of lowland rainforest were cleared. Settlements were established throughout the area and the resident population began to grow.

Following World War II the timber industry regained momentum. Extensive tracts of virgin hardwood forests were logged and by 1955, the Cape Tribulation road was being extended north to allow recovery of felled timber. By 1963, it was completed through to Cape Tribulation. A private ferry operated on the Daintree River from 1956.

During this time a proposal was developed to extend the coastal road north from Cape Tribulation. Although the construction of the road was a controversial issue, it was completed by 1984, providing a direct link to Cooktown.

In 1988, Daintree National Park (CYPAL) was recognised internationally as a significant natural area with its listing as a Wet Tropics World Heritage Area (WTWHA).