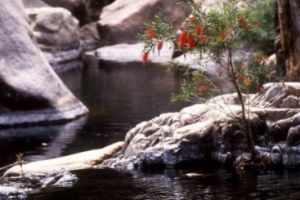 Weeping bottlebrushes grow along the creek.

Approximately 74 per cent of Paluma Range National Park is within the Wet Tropics World Heritage Area (WTWHA). Proclaimed in 1988, the WTWHA extends for about 450 km between Cooktown and Townsville. Consisting of nearly 900,000 ha, vegetation is primarily tropical rainforest, but also includes open eucalypt forest, wetlands and mangrove forests. The WTWHA meets all four natural criteria for World Heritage listing. These criteria recognise the area's exceptional natural beauty and the importance of its biological diversity and evolutionary history, including habitats for numerous threatened species. The WTWHA also has cultural significance for Aboriginal people who have traditional links with the area and its surrounds.

The moist conditions of the rainforest-fringed creek attract a variety of birds such as azure kingfishers (Ceyx azureus), pied monarchs (Arses kaupi), noisy pittas (Pitta versicolor) and northern fantails (Rhipidura rufiventris). During the summer months you may even see buff-breasted paradise-kingfishers (Tanysiptera Sylvia). These birds migrate from New Guinea to nest.

Freshwater turtles (Emydura macquarii) sun themselves on rocks and logs and quickly retreat into the water at the first hint of danger. Goannas (Varanus varius) can also be seen near the water's edge and venture between the rainforest and open woodland looking for food.

During the evening, nocturnal birds become active and may be seen with spotlights. The distinctive ‘mo-poke’ call of the southern boobook owl (Ninox boobook), along with the wood-chopping sound of the large-tailed nightjar (Caprimulgus macrurus), can provide a lead to their location. The tawny frogmouth (Podargus strigoides) also occurs in the area and is sometimes seen during the day roosting on lower tree branches.