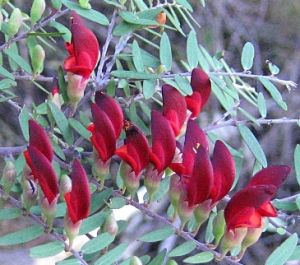 Spring is a brilliant time to see the park's wildflower displays, such as the Moogerah pea Bossiaea rupicola.

Moogerah Peaks National Park was once beneath the belly of a volcano—the ancient Main Range volcano—which erupted some 24 million years ago. The eastern flank of this volcano once spread across the Fassifern Valley, probably as far as Mount Maroon, Boonah and even to Ipswich, while on the western side it spread to at least Warwick. It erupted mainly basalt lavas, which may have been as thick as 1000m near the volcano's crest.

The distinct peaks of the Moogerah Peaks National Park had their origins deep below the volcano. Composed of different rock types, separated from basalt magma at great depths, they formed as plugs, dykes or sills when magma entered numerous cracks and weaknesses in underlying older rocks, as well as moving up the main vents.

Prolonged erosion over 20 million years has removed mainly the eastern side of the volcano. The relatively steep slopes and greater power of the east-flowing streams rapidly eroded the volcanic lavas to create a retreating escarpment (long, cliff-like ridge), which is now the edge of today's Main Range. As the volcano and some of the underlying rocks were eroded away, any plugs, dykes or sills composed of resistant rocks—particularly those of rhyolite and trachyte—remained as steep peaks.

Mount Edwards is a large trachyte plug, which formed when magma filled vertical pipe-like fissures. The plug is cut by Reynolds Creek to form the mountain's distinctive two peaks. Mounts Greville and Moon are rhyolite plugs. The deep gorges of Mount Greville were caused by the erosion of basaltic dykes (magma that forces its way across older rock strata), which offered less resistance to weathering than the rhyolite. A large crevice cutting across Mount Moon is a prominent fracture enlarged by erosion.

The white rhyolite sill that is Mount French was formed when magma was forced between horizontal layers of sedimentary rock. These layers were then eroded over millions of years to leave a plateau surrounded on most sides by cliffs. Vertical columns formed from cooling and contraction of the sub-surface magma. Today rock climbers value these vertical columns for the numerous climbs of varying difficulty. Many plants within the park are only found on the Moogerah Peaks, such as Leionema gracile.

Brigalow, eucalypt open forest, lowland rainforest, heathlands and Araucarian vine forests once thickly covered the peaks and flats of this area. Clearing, logging and farming has tamed the 'bush', hemming in its growth to the peaks, gorges, cliff lines and rocky ridges. Today the mountains provide the only significant refuge in the landscape for numerous plant and animals, some now vulnerable to extinction and some restricted to a single mountain.

Two species of lichen occur on the rhyolite summit of Mount French and nowhere else on Earth. They are regarded (but not listed) as endangered.

Other peaks protect the vulnerable Marsdenia coronata (slender milkvine). This vine's distribution has been restricted significantly since European settlement.

Small remnant populations of brush-tailed rock wallabies Petrogale penicillatea make their home on all the park's four isolated peaks. Mount French has been known to support populations of black-breasted button-quail Turnix melanogaster. This rarely seen, ground-dwelling bird is vulnerable, and the fragmentation of the bird's habitat has exposed the bird to increased competition and predation. The powerful owl Ninox strenua is Australia's largest nocturnal avian predator and makes its home on some mountain peaks within the park.

Described as the 'ultimate predatory bird' or even as the 'Top Guns' of feathered hunters, the peregrine falcon Falco peregrinus is a formidable aerial predator. The falcon launches its high-speed attack by either chasing its feathered prey or diving vertically with wings closed. The speed that the peregrine reaches in its impressive near vertical dive has been estimated at more than 180km/hr! Looking back towards Logans lookout in the early 1900s, a group of intrepid walkers take in the view.

For the Yuggera Ugarapul People the peaks of Moogerah are key landmarks—each holding links to the creation of their country and many holding important cultural stories. Please respect this country—walk softly and leave no trace.

During the early exploration of the mountain ranges south-west of Brisbane, the Fassifern Valley was identified as an area ideal for agricultural settlement. In June 1827, Captain Patrick Logan, Commandant of Moreton Bay Penal Settlement, set out from Ipswich to explore the mountain range that dominated the southern skyline. Logan thought the range was the 'Mount Warning Ranges' named by Lieutenant James Cook from the 'Endeavour' in 1770. It was only when he climbed a prominent feature in the range, which he named Mount Dumaresq after Governor Darling's son-in-law, that Logan realised it was not Cook's mountain range. Ironically, while Logan had named his peak Mount Dumaresq, the explorer and botanist Alan Cunningham had used the same name for a mountain he climbed on the western side of the Great Dividing Range that same month! Not until both Cunningham's and Logan's reports reached the Sydney authorities was the coincidence discovered. As Cunningham had named his mountain first, Logan renamed his mountain in honour of Dumaresq's, country of birth—Mount French (Pugsley, 1975).

Until 1842 it was illegal to occupy land within 80km of the Moreton Bay penal settlement. From this date on, station lessees began to arrive in the Fassifern area, setting up sheep and cattle runs. By 1857 three large station runs covered the whole district. Up until the 1880s, the peaks remained untouched with only a small amount of timber removed for fencing and yards. During the life of the area's timber industry, only the occasional stand of crows ash, rosewood, pine and red cedar were removed from the lower slopes of the peaks. The peaks' inaccessibility saved many undisturbed stands of timber and significant wildlife habitats. Seen as having very little agricultural, grazing or timber value, the peaks were largely left as monuments to pre-European settlement. Feral animals and inappropriate fire were the only impacts that altered the vegetation and animal populations of the peaks.

Mount Greville, named by Allan Cunningham in 1828 in honour of the Scottish botanist Robert Kaye Greville, was the first of the peaks to be gazetted as national park, in 1948. Mount Moon followed in 1953. Mount Edwards, originally named Mount Banister by explorer John Oxley in 1824 and renamed by Alan Cunningham in 1828 after Lieutenant George Edwards, was gazetted in 1966 (Pfeffer, 1991). After the original proposal for a national park in 1953, a small section on Mount French was gazetted national park because of its scenic and historic values in 1967. The park grew over the following years; in 1987 the internationally known rock climbing cliffs on the north peaks were incorporated into the park. In 1991 the park almost doubled in size—from 119ha to 225.5ha. In 1994, all the small national park peaks were amalgamated into Moogerah Peaks National Park.

A mountain to climb

As long as there have been people, there has always been the challenge to climb. As the young settlements of the shire prospered, more opportunity for leisure grew. Many weekend adventures lead energetic settlers to climb the peaks to view their new homeland. Picnics and bushwalking became popular in the early 1900s. In the 1940s, Mr Alf Wagner, then owner of the north peak area of Mount French, paid for the construction of the road to the summit.

From ‘Corner of Eden’ to ‘Guns of Navarone’

Corresponding to the park's recognition as a significant natural and cultural location in south-east Queensland was its rising credibility as a rock climbing site, specifically the Mount French section. A new culture emerged to see the mountain through different eyes and to know the mountain by a different name.

To the rock climbing world, Mount French is known as ‘Frog Buttress’. It is internationally renowned for its crack climbs (vertical rock crevices).

The mountain had long attracted people to its cliffs, but few had ever climbed them. The new wave of interest in climbing, coupled with new climbing techniques and equipment, saw an explosion in the late 1960s of the numbers of cliffs climbed. It was during this time that climbers Rick White and Chris Meadows climbed the mountain’s first cliff route–‘Corner of Eden’ at Frog Buttress in 1968.

A decade later, over 200 climbing routes had been mastered and named on Frog Buttress. As climbers continue to push the limits of physical possibility, more routes are added to Frog Buttress’s already impressive list. Today, local, interstate and overseas climbers enjoy the challenge of 380 routes.

Climbs are graded according to their difficulty. A grade 36 is the hardest climb in the world. On Frog Buttress the easiest climb is a grade 6 (Saturday Afternoon Walk) while the most difficult is a 32 (Whistling Kite). Popular bands, songs, movies or books of the 1960s, 70s and 80s inspired many of the climbing route’s names. ‘Clockwork Orange Corner’, ‘Mr Bo Jangles’, ‘Lord of the Flies’ and ‘Catcher in the Rye’ are just a few examples.

Rick White, one of Queensland’s most prominent climbers with a climbing career that spanned 20 years, named many of Frog Buttress’s climbs. Both he and Chris Meadows are renowned for discovering and naming Frog Buttress, which was originally named ‘Paradise Lost’ by Rick White after the epic poem by John Milton, 1667 (Donoghue and White, 1979).