Chasing volcanoes (and waterfalls) in the tropical north
Issued: 13 Mar 2020

They say ‘don’t go chasing waterfalls’ but we suggest you do, and volcanoes too!

They say ‘don’t go chasing waterfalls’ but we suggest you do, and volcanoes too! The extinct kind, of course.

The highlands behind Cairns—the Atherton and Evelyn tablelands—are riddled with volcanic features—crater lakes, volcanic cones and spectacular waterfalls tumbling over old volcanic flows! And a little to the west lies one of the longest lava tubes in the world!

These volcanoes are extinct but only just. Active from 8 million years ago until just 8000 years ago, they are some of Australia’s youngest volcanoes. In fact, some are young enough to be recorded in the stories of First Nations people!

In Queensland National Parks, you can visit a handful of these volcanic features in just one day! Swim or kayak in a flooded crater, hike to a crater rim, climb up a volcanic cone or bushwalk to discover waterfalls cascading down lava flows. And, with an extra day up your sleeve, you can explore inside a lava tube cave as well!

Here’s your checklist of volcanoes and waterfalls to chase down in the tropical north. 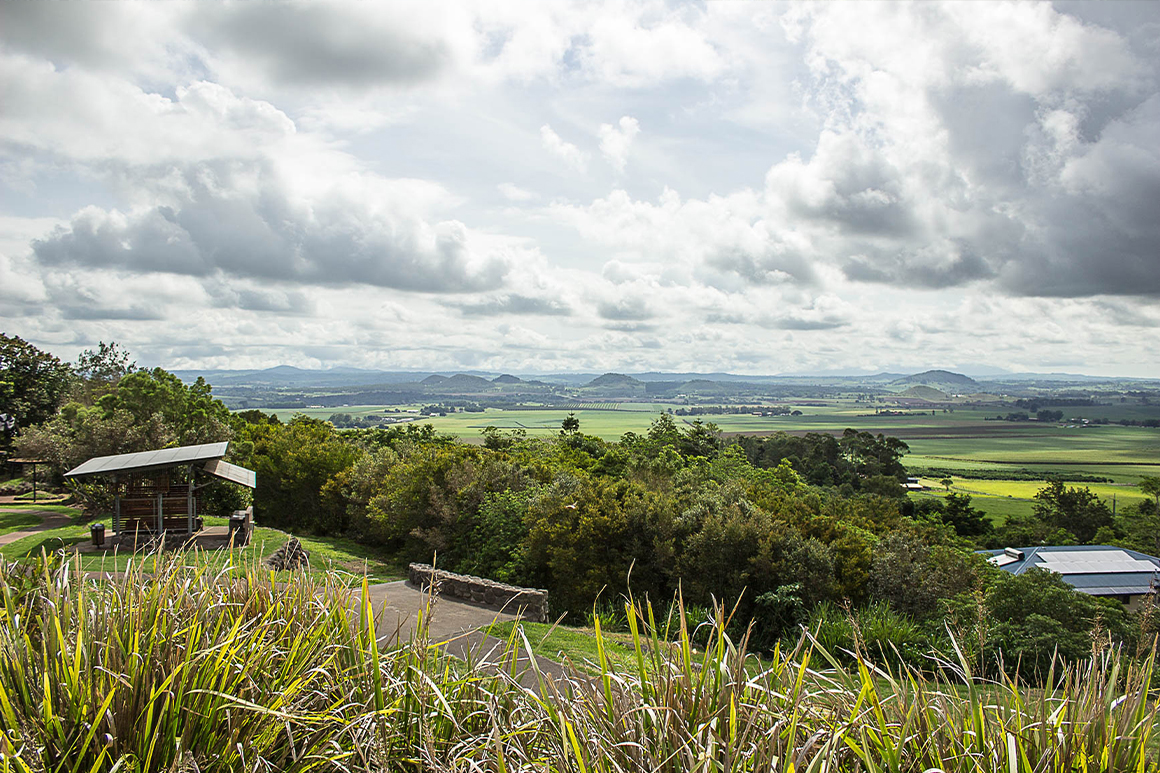 Slap bang in the middle of Atherton township rises a dome-shaped hill, and, if that’s not a dead give-away, we don’t know what is!

At Hallorans Hill Conservation Park, you can take an easy 1.4km walk (or drive) to the top of this extinct shield volcano. About 2 million years ago, lava from this volcano spilled across the landscape—hello rich red soils of the tableland!—before piling up into the broad gently-sloping hill we see today.

From the summit, look into the distance for a line of scoria cones—conical hills—known as the Seven Sisters. About 1 million years ago, small vents in the ground spurted fiery fountains of frothy basalt lava into the air. Spatters of lava rained down around the vents, mounding into these cone-shaped hills of scoria that today dot the landscape. 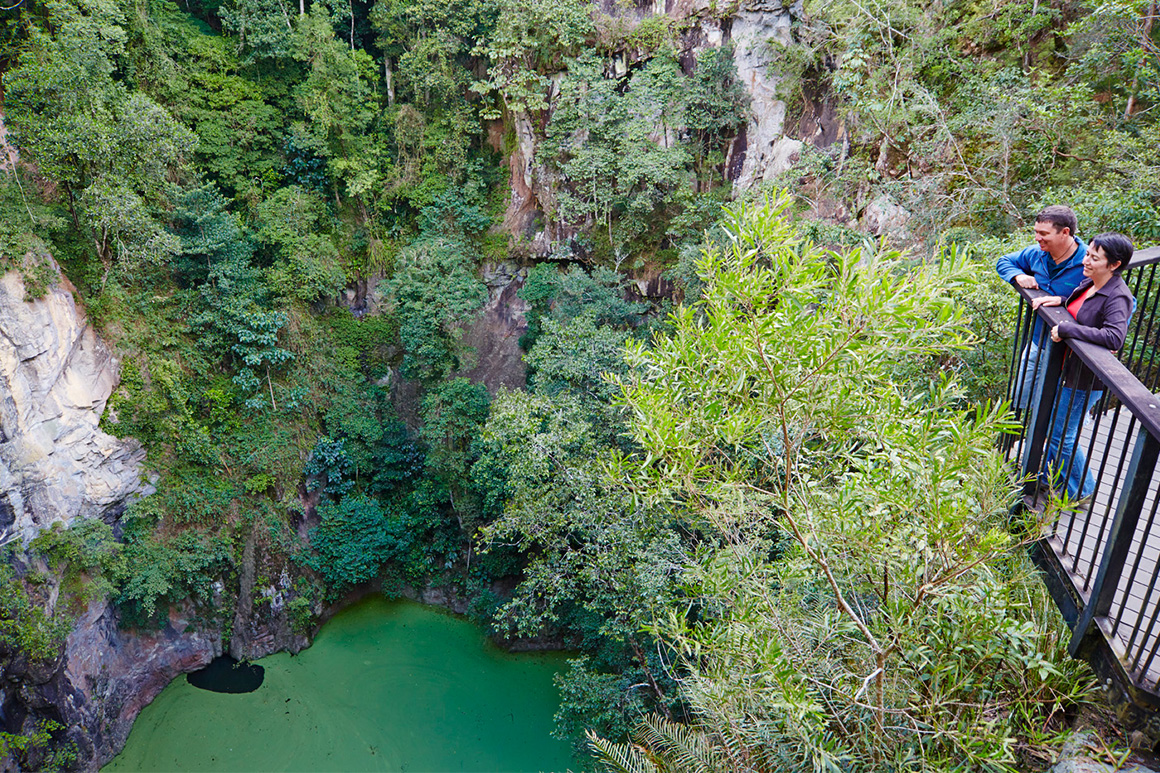 Get ready for an eerie experience in Mount Hypipamee National Park, 25km from Atherton. Follow the 800m return Crater track through rainforest to the viewing platform overlooking a steep narrow-sided hole that appears out of nowhere. Peer over the crater rim—58m down is the motionless, algal-green surface of the water, and 73m below that is rock-bottom.

How did it form? Around 10,000 years ago, underground basalt magma began to rise, then hit ground water. Kapow! A violent explosion of steam blasted this crater through solid 310-million-year-old granite. Known as a volcanic pipe or diatreme, it is North Queensland’s only example!

Walk back along the Dinner Falls circuit (1.2km return) to see the falls tumbling over hard bars of ancient granite. The peaceful surrounds of lakes Eacham and Barrine, Crater Lakes National Park, belies their explosive past. Around 10,000 years ago, things weren’t so idyllic.

Like the underground action that created Mount Hypipamee, rising basalt magma met groundwater and massive steam explosions excavated the 60m deep craters known as maars. Ground water then filled these low-rimmed craters, forming the lakes we know and love today, all but hidden beneath their cloak of surrounding rainforest.

Explore the 5km Lake Barrine circuit, or the 3km Lake Eacham circuit to see the area through the eyes of the Aboriginal Traditional Owners, whose creation stories about the crater lakes mirror geological explanations. Refresh with a swim in the lakes’ cool waters, paddle a kayak around the craters’ rainforest-fringed edges, or take a leisurely boat cruise on Lake Barrine. 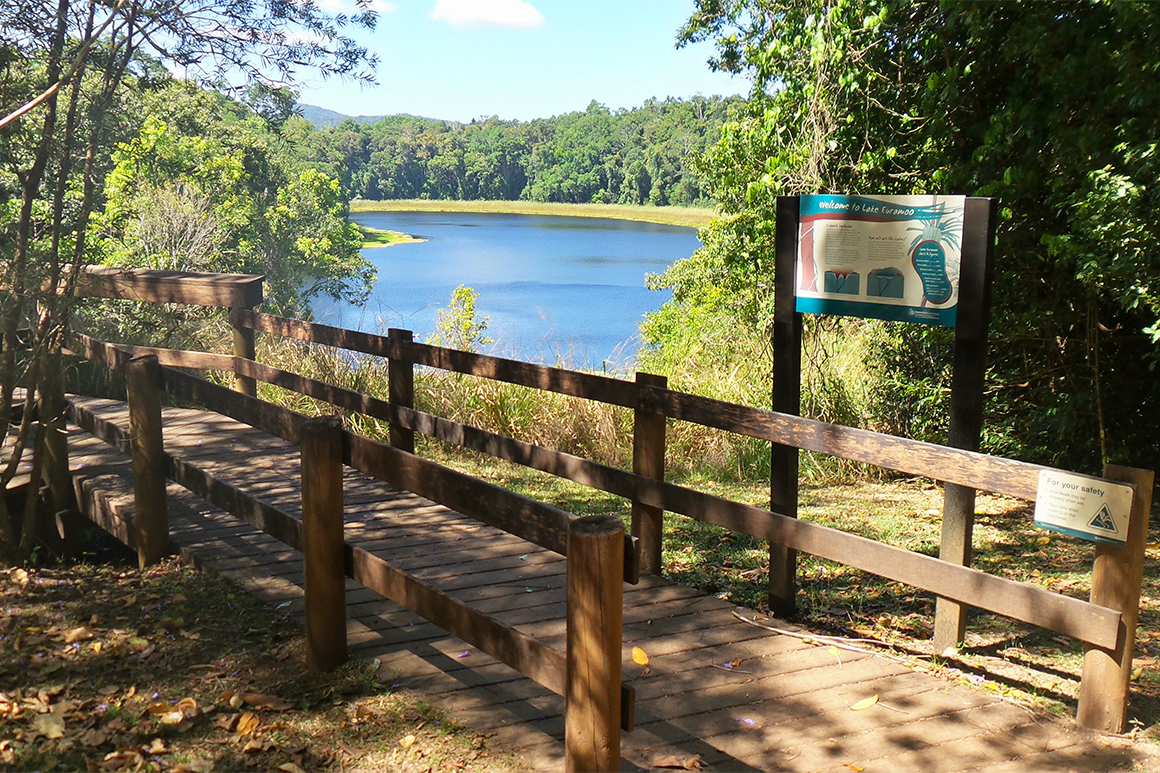 Along the scenic Danbulla Forest drive, in Danbulla National Park, you’ll discover another scenic volcanic crater. Around 10,000 years ago, a massive double explosion of steam from super-heated groundwater rent the air, creating the dumbbell-shaped maar of Lake Euramoo. Stroll around the 500m circuit and gaze into the crystal-clear water from the viewing platform.

Nearby, you’ll also find the Mobo Creek Crater. Although a product of volcanic activity, geologists don’t believe it is a true crater, rather the result of erosion of a basalt lava flow. Explore the 630m circuit through rainforest around the crater’s edge and draw your own conclusions!

Volcano #5, tick. That’s your handful of volcanoes for the day! Now about those waterfalls … 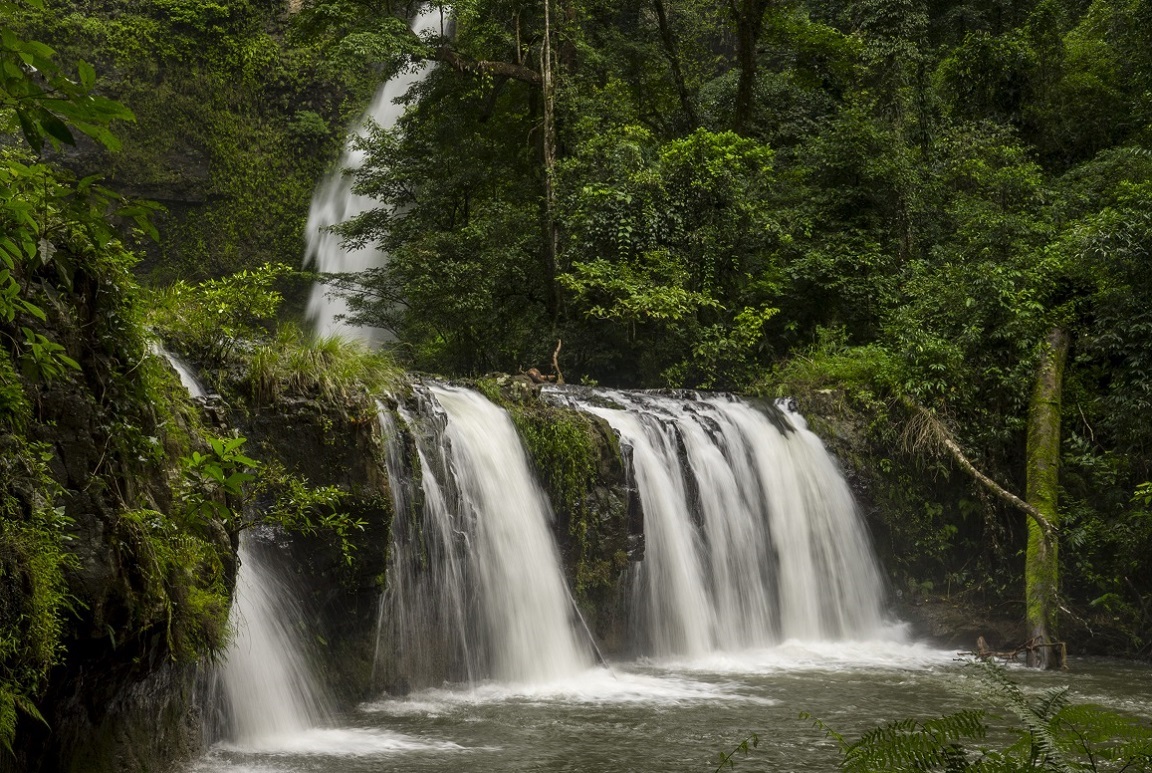 Drive into the tableland town of Malanda—you’ll encounter your first waterfall in Malanda Falls Conservation Park—and you’ll be driving past the heavily-eroded Malanda shield volcano. It erupted several million years ago, spilling lava down the ancient Johnstone River, forming a ‘ramp’ of basalt over the escarpment down to the coast.

From Henrietta Creek camping area, walk 6km return to Nandroya Falls, to admire the falls set in a beautiful rock amphitheatre, where Douglas Creek tumbles over the basalt surfaces of different lava flows. Tableland volcanoes also ‘shared their love’ to the west. The Windy Hill volcano near Ravenshoe—today home to a wind farm—spilled lava into the Millstream valley. Over time, the streams carved new courses around and through these basalt lava flows.

In Millstream Falls National Park, stroll to Little Millstream Falls to see water cascade delightfully over old basalt flows and, looking down the gorge, see where the stream has cut a path between the black basalt on the left and paler older volcanic rocks on the right.

Don’t miss Big Millstream Falls where you’ll see the widest single-drop waterfall in Australia, where the falls plunge over a horizontal lava flow. Look for the distinctive vertical columns of basalt, formed as the lava cooled, contracted and cracked downwards. There are 3 different lava flows in this area—the falls spill over the lower (older) flow and the car park is built on the uppermost flow that is 1.24 million years old! 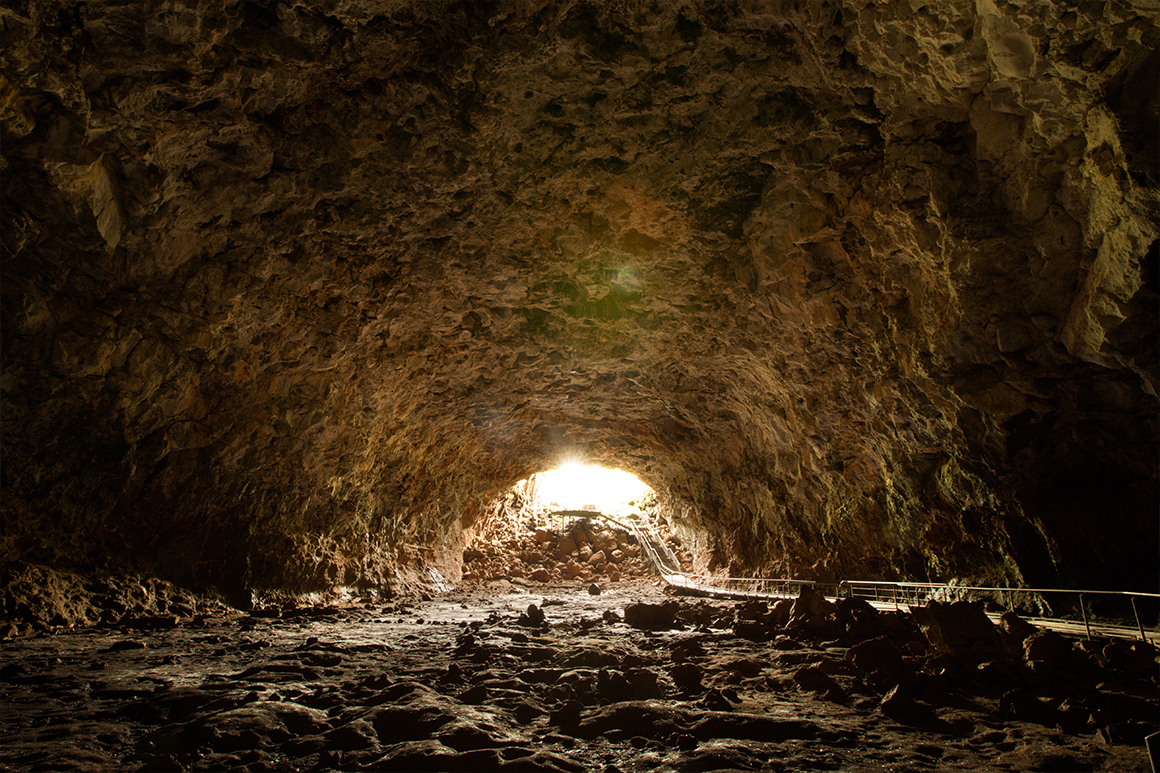 Get an insider’s view of volcanic action! Drive 2 hours west from Atherton to Undara Volcanic National Park, home to some of the largest and most extensive lava tube caves in the world!

What is a lava tube? It’s a tunnel-shaped ‘cave’ that looks and feels a bit like an underground rail tunnel. When lava spewed out of the Undara Crater, 190,000 years ago, it poured down valleys, cooling and crusting over on the outside, while the still-hot lava inside continued to flow. The lava drained out leaving behind a hollow tube of solid lava. Later, weaker sections of the tube ‘roof’ collapsed, creating lava tube caves and depressions.

Stay at Undara Experience, take a guided tour (led by informative Savannah Guides) of sections of intact lava tube and be amazed by its sheer size!

Climb the Kalkani Crater, a scoria cone like the Seven Sisters built up by a ‘fire fountain’. From your vantage point on the crater rim, you can trace the path of the lava tube across the landscape by looking for the line of dark green vine scrub that grows in the collapsed segments.

So there you have it! A pleasant jaunt chasing volcanoes and waterfalls across the parks of the tablelands, and further west, can become a journey into our fiery geological past.

Find out more about these parks and start planning your next day trip.