We recognise the traditional custodians of Wambuluna (Townsville Town Common) — the Gurambilbara Wulgurukaba people, and pay our respects to Elders past, present and emerging. 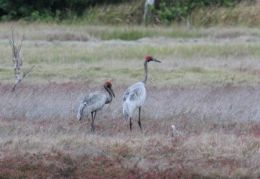 Brolgas with a chick. 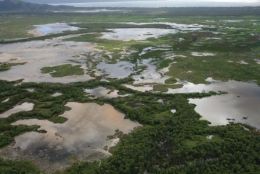 Aerial view of the Town Common wetlands during the wet season. 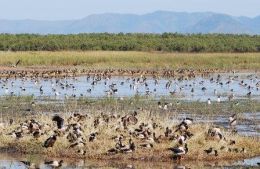 Townsville Town Common Conservation Park is a place of constant change. Most years it is transformed by summer rains from a series of dry saltpans and grasslands surrounded by forests, into an immense wetland habitat. This annual cycle is divided into three main periods—the pre-wet, the wet and the post-wet.

The pre-wet period extends from early September to late December. Most lagoons formed during the previous wet have dried out, leaving the once luxuriant growth surrounding the lagoons, withered. With the drying of the wetlands, huge numbers of waterfowl leave in search of food and suitable habitat.

Small flocks of brolgas remain to feed on bulkuru sedge tubers, which they probe for in the drying lagoons. A few magpie geese congregate around remnant waterholes.

Thunderstorms build up during November and December heralding the onset of the wet season. During a good wet season there is dramatic change. Water soon covers the parched wetlands, vegetation regenerates and the grey, brown and pink hues of the dry landscape are replaced by a mosaic of green shades.

Large flocks of magpie geese take up residence and only a few breeding pairs of brolgas are seen. Agile wallabies also benefit and many females can be seen with bulging pouches and new joeys. The wet usually extends from late December to early April. Many waterbirds breed during this period, with magpie geese being the most conspicuous.

The rainfall ends abruptly, signalling the start of the post-wet period. Water, food and shelter are abundant during April, May and June but decrease through July and August. Large aggregations of waterbirds, dominated by magpie geese, now occur around remaining water. From May onwards, brolgas return from the drying hinterland. They form flocks, feeding on bulkuru sedges, other vegetation and small animals. The abundance of food during this period also attracts several birds of prey that hunt over the wetlands, while the long grass provides homes for finches, red-backed fairy-wrens and cisticolas.

Flocks of honking magpie geese flying in wedge-shaped formations are a feature of the sky over Townsville, especially from January to August, as they move between the Town Common and the wetland areas to the south-east. Towards the end of August, surface water rapidly disappears and many waterbirds leave the Town Common. The cycle advances into the pre-wet phase when swamps again dry out and bake in the sun.