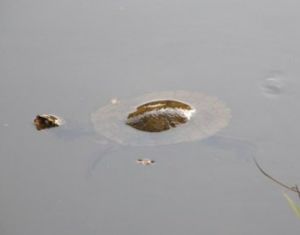 Freshwater turtles (Banggurru) can be seen in Stoney Creek. Platypus live in Stony Creek, Queensland. Look for them in the early morning or at dusk. 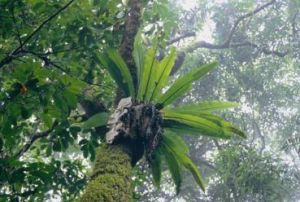 Epiphytes grow on trees, high in the rainforest canopy.

Wallaman Falls in Girringun National Park is within the Wet Tropics World Heritage Area (WTWHA). Proclaimed in 1988, the WTWHA extends for about 450 km between Cooktown and Townsville. Consisting of nearly 900,000 ha, vegetation is primarily tropical rainforest, but also includes open eucalypt forest, wetlands and mangrove forests. The WTWHA meets all 4 natural criteria for World Heritage listing. These criteria recognise the area's exceptional natural beauty and the importance of its biological diversity and evolutionary history, including habitats for numerous threatened species. The WTWHA also has cultural significance for Aboriginal people who have traditional links with the area and its surrounds.

Find out more from the Wet Tropics Management Authority.

The origins of Wallaman Falls are anything but humble. Several major geological events created the landscape that you see today.

About 50 million years ago, movement of the earth's crust formed the edge of the continent that lies against the Coral Sea and the formation of present day landforms began. An earlier Herbert River flowed towards the west. It is not known when it reached its present east-flowing course.

Continuous erosion caused the Herbert River Falls to retreat by around 40cm every 100 years. As the gorge became longer, tributaries like Stony Creek were left suspended. This created waterfalls, such as Wallaman, which in turn eroded their own gorges.

The diverse habitats within Wallaman Falls, Girringun National Park provide for a wide range of animals. Platypus, eastern water dragons and saw-shelled turtles live in the Herbert River and its tributaries while the camping area is rich with birds such as crimson rosellas, golden whistlers and Lewin's honeyeaters. At night, the forest is alive with the sounds of frogs calling to mates and brushtail possums, sugar gliders, red-legged pademelons and bandicoots scurrying through the vegetation.

Several of the region's vegetation types are represented in Girringun National Park. These include upland rainforest, mesophyll rainforest and tall open forest. The bird-attracting red flowers of the weeping bottlebrushes are a common sight along Stony Creek.

Casuarinas, eucalypts and grasstrees colonise the nutrient poor soils around the rim of Wallaman Falls, while palms, umbrella trees and figs prefer the more fertile soils of the rainforest. The constant humidity in the gorge supports a dense rainforest and a rich mosaic of mosses, lichens and epiphytes.

Wallaman Falls is part of the traditional lands of the Warrgamaygan Aboriginal people. Their spiritual ancestors dwell in the area.

The Warrgamaygan people walked this land and cared for this country, long before the concept of sustainability was developed. They moved with the changing seasons, enjoying a lifestyle based on hunting, gathering and fishing.

For the Warrgamaygan people, this country was not only the home from which they harvested their food and other resources, but it also sustained their spirituality. This connection continues today.