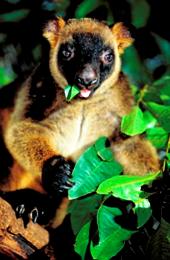 Look for scats of the southern cassowary on the walking track. 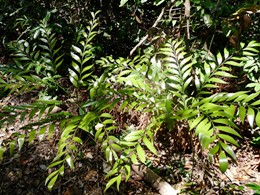 Bowenias grow along the track edges.

In Charmillin Creek look for zebra shrimp Cardinia zebra and the tadpoles of barred frogs Mixophyes sp. The tiny (20 mm) shrimp have black and white bands—a colour form only found in the upper reaches of the Tully and Herbert rivers on the Cardwell Range. The barred frog tadpoles are large, strong swimming tadpoles that use their mouth to grip the substrate.

While walking, look for Lumholtz’s tree-kangaroos Dendrolagus lumholtzi. These near threatened (rare) tree-kangaroo have distinct body characteristics to enable them to live in trees. An exceptionally long, pendulous tail helps with balance while strong forelimbs and short, broad hind feet help with balancing, gripping and climbing. Curved claws and spongy soles and palms also help with gripping and climbing. The Lumholtz's tree-kangaroo eats mostly leaves but also fruit and flowers from a wide variety of native trees and some weeds.

Southern cassowaries Casuarius casuarius johnsonii are large flightless birds found in North Queensland’s tropical rainforests, melaleuca swamps and mangrove forests. They are integral for the health of these forests—their droppings can contain hundreds of seeds gathered from hectares of trees, shrubs and vines. Southern cassowaries are endangered, with less than 1500 thought to be left in the wild. Their survival is threatened by habitat loss, modification and fragmentation; dog attack; vehicle strike and human interaction. Tropical cyclones Larry (2006) and Yasi (2011) also devastated parts of the cassowaries’ habitat.

Severe tropical Cyclone Yasi crossed the Queensland coast near Mission Beach around midnight on 2 February 2011. Wind gusts near the centre of the cyclone reached around 285 km/hr and damaging winds and heavy rains extended 400 km along the coast between Cairns and Townsville, and inland to Mount Isa.

A tidal surge of 5 m was recorded at Cardwell (2.3 m above the highest astronomical tide). High rainfall totals between 200–300 mm were experienced in the 24 hours following the cyclone, with South Mission Beach recording the highest total of 471 mm.

Significant wind damage occurred between Innisfail and Townsville. In particular, the area around Tully and Cardwell—including Tully Falls National Park—suffered damage to structures and vegetation. The parks and forests within the cyclone’s path suffered extensive damage with tree falls; loss of branches, epiphytes and vines; and leaf stripping of the canopy. Tropical cyclones are a natural part of the dynamics of the Wet Tropics landscape. These rainforests are ‘hyper-disturbed ecosystems’, with patches of damaged forest constantly recovering from previous cyclonic events. Rainforest plants have evolved many strategies for recovering from the damage caused by high winds; and some species (pioneers) are ready to spring to life and fill the gaps created in the canopy. The rainforest is quick to recover from cyclones—changes can be seen day-by-day.

The Wabunga Wayemba walking track travels through upland rainforest on granite and rhyolite. Tall water gums Syzygium gustavoides and bull kauris Agathis microstachya fill the canopy with the fronds of scaly treeferns reaching across the track and shading walkers. Along the walking track, look for coral ferns Lycopodiella cernua, bowenias Bowenia spectabilis and the sharp blades of sword grass Gahnia sp. that can scratch the bare legs of unsuspecting walkers.

Coral fern belongs to the clubmoss family and is neither a fern nor a moss—it is actually a ‘fern ally’. The Lycopodiella genus contains 40 species in the moist-temperate and tropical regions of the world.

Bowenias, or zamia ferns, Bowenia spectabilis are named after the first governor of Queensland, Sir George Bowen. Bowenias are part of an ancient group of cycads and fossils indicate they have changed little over the past 45 million years. Bowenia spectabilis is restricted to rainforests and wet sclerophyll forests of north-east Queensland.

Tully Falls National Park is in the Wet Tropics World Heritage Area. Proclaimed in 1988, the area is almost 900,000 ha and extends for about 450 km between Cooktown and Townsville. The area's vegetation includes tropical rainforest, open eucalypt forest, wetlands and mangrove forests. The area meets all four natural criteria for World Heritage listing. These criteria recognise the area's exceptional natural beauty and the importance of its biological diversity and evolutionary history, including habitats for numerous threatened species. It also has cultural significance to the Aboriginal people who have traditional links with the area and its surrounds.

Timber from the Tully Falls National Park area was selectively harvested from early settlement until World Heritage listing in 1988. The timber supplied local mills in the Ravenshoe area. The steeper parts of the park remain untouched, as the terrain meant harvesting was not possible.

The Jirrbal people are the Aboriginal Traditional Owners of Tully Falls National Park. Their dry forest and rainforest country extends from Herberton in the north, west to Ravenshoe, east to Evelyn Central and south to Davidson Creek at the bottom of Tully Gorge. Jirrbal people have an intimate knowledge of traditional country and close kin affiliations with neighbouring groups.