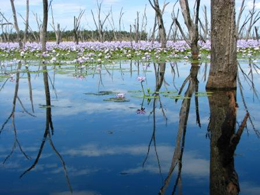 Located on the Brown River, Lake Nuga Nuga occurs within the Comet River catchment and during favourable seasons the Brown River and Moolayember Creek flow into the lake.

It is believed that the lake only formed within the last 160 years, the result of a series of natural events. Heavy rain and flooding of the Brown River filled the existing lake and surrounding swamps, before a scouring flash flood in Moolayember Creek transported large amounts of silt into the vicinity of the lake. When these waters reached the right-angle junction with the Brown River, turbulence caused the deposition of silt to form a natural levee bank at the lake's northern end.

The many dead trees throughout the water area may indicate its relatively short period of existence. The trees are also used by water birds and other wildlife that are concentrated in the area.

The park protects several significant plant and animal species, including the vulnerable ooline Cadellia pentastylis. This tree was once widespread from central and southern Queensland to north-west New South Wales. It is now restricted to a few isolated areas.

Other plant species including brigalow Acacia harpophylla, broad-leaved bottle-tree Brachychiton australis and eucalypts such as poplar box Eucalyptus populnea, and ironbark, are present on the park. Rosewood Acacia rhodoxylon dominates the summit and sides of Mount Warinilla, with ironbark fringing the edges and scarps.

There are areas within the park composed of a combination of open or shrubby woodland communities dominated by narrow-leaved ironbark Eucalyptus crebra and spotted gum Corymbia citriodora. Coolibah Eucalyptus cooabah woodland is also present.

Bonewood and semi-evergreen vine thicket occur throughout the park, while currentbush Carissa ovata is a significant coloniser of vine thicket margins.

Lake Nuga Nuga provides valuable habitat for waterbirds, many of which are migratory and are listed under International treaties. Large numbers of birds such as pelicans, black swans, magpie geese, brolgas, grey teal, great crested grebes, pink-eared ducks, hardheads and plumed whistling-ducks use the lake at times.