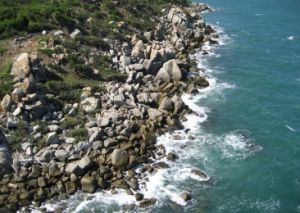 When boating, help protect the fringing reefs by following these guidelines:

Be aware that estuarine crocodiles can occur in waters around island national parks. Remember, your safety is our concern but your responsibility—always be croc wise in croc country.

Other things to do

This remote scenic island offers beach walking along the strand line. The interior of the island is not accessible.

More than 21 species of birds have been recorded on the islands. Seabirds include lesser frigatebirds, crested terns, lesser crested terns, roseate terns, sooty terns, black-naped terns and ospreys. Terrestrial birds include leaden flycatchers, rufous fantails and white-breasted woodswallows. Eastern yellow robins have been recorded breeding on the island. Restoration Rock is a rookery for breeding pied imperial-pigeons and bridled terns. Wading birds such as eastern curlews, eastern reef herons and whimbrels can be seen stalking the shallows.

Estuarine crocodiles have been observed in waters around the islands, along with vulnerable green and hawksbill turtles and loggerhead turtles. Small numbers of green turtles nest on the islands while the other turtle species use the area for feeding. Vulnerable dugongs have also been sighted in the area. Two species of bats have been recorded on the islands—the vulnerable coastal sheathtail bat and the rare diadem leaf-nosed bat.