How does a ‘sleepover’ in Jurassic Park (minus the scary dinosaurs) sound?

How does a ‘sleepover’ in Jurassic Park (minus the scary dinosaurs) sound? In Springbrook National Park, amid ancient moss-shrouded trees, cascading waterfalls and cliff-edged plateaus, you‘ll feel as though you’ve entered a film set for Jurassic Park.

Camp here for a weekend—truly immersing yourselves in this prehistoric landscape—and it’s as though you’ve travelled back through time. You and your family of young adventurers will walk (and wake) with ‘dinosaurs’ of both kinds—plants and animals!

In Springbrook, you’ll discover rainforests similar to those that covered the ancient supercontinent of Gondwana, with primitive plants dating back to prehistoric times, and animals that are the modern-day descendants of dinosaurs!

While the journey to Springbrook is only 45mins from the Gold Coast or 1.5hrs from Brisbane, you’ll feel like you’re a million miles (or is that years?) away from home. So pack your bags, time-travellers! Remember to take warm clothes and spray jackets—Gondwana rainforests can be cool and misty (or is that mystical?)… Your time machine will land in The Settlement camping area, where you’ll find inviting grassy camp sites. Set up your tents, camper trailer or campervan, breathe in the cool mountain air and feel your modern-day stresses melt away.

With toilets, drinking water and a cooking shelter with free electric barbecues available, this is Gondwanan-camping made easy! You can’t go completely ‘cave man’ (or woman) by cooking over a camp fire though—open fires aren’t allowed at Springbrook—so a fuel stove will be essential.

On the other hand, cave men presumably didn’t have showers, and we don’t either. For a long weekend you won’t mind (and the kids sure won’t care!).

When food sources become low, or if you tire of slaving over the barbie, you may want to take your hunter-gatherer skills into Springbrook township and hunt down a meal in one of the local eateries or gather some goodies from the fudge shop!

So that’s the ‘sleepover’ covered, now about those dinosaurs … Wake in the mornings to the sounds of songbirds and you’ll be listening to modern-day dino-descendants!

If you have a dinosaur-lover in the family (and which family doesn’t?), you’ll probably know that birds evolved from dinosaurs (theropods) in the Jurassic period (around 150 million years ago).

But what’s truly gob-smacking is that songbirds evolved, right here, in the ancient and wild Gondwana rainforests of Australia, about 30 million years ago. They then spread around the world, and today make up almost half of the world’s birds!

Springbrook’s Gondwana rainforests are home to songbirds from the most ancient ‘bird families’. So when your young adventurers wake to the morning birdsong, see if they can identify the long drawn out ‘whip crack’ of the whipbird and the quavering ‘mea-ow’ of the catbird. Or what about the loud descending whistles of the satin bowerbird and the vibrant medley of Albert’s lyrebird from the depths of the valleys? You’re hearing from the descendants of the dinosaurs that once roamed this very forest! 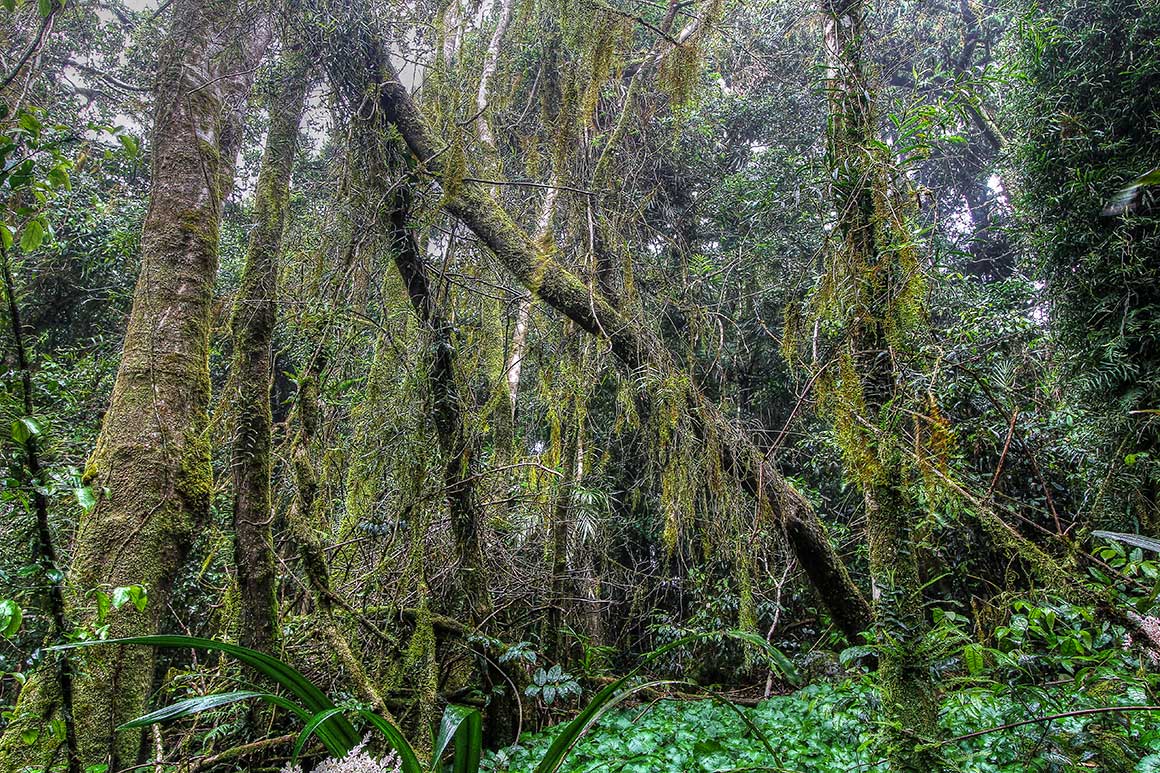 Birds aren’t the only dino-descendants around. Look, kids! See the prehistoric-looking water dragons stalking around the camping area or alongside the walking tracks? The family resemblance to dinosaurs is unmistakable! Your dinosaur-loving kid will no doubt inform you that lizards evolved from Lepidosauromorphs in the Mesozoic era.

You’ll also discover trees that date back to ‘dinosaur days’—relics of a cooler, wetter time when rainforest covered most of the supercontinent, Gondwana. Incredibly, Antarctic beech trees lived here then, and still live here today.

The best place to see these ancient trees—some are 3,000 years old—is on the Best of All lookout track. Gather your young explorers and head off on this easy 600m return walk to a lookout with views to Mount Warning. This mysterious forest holds secrets of an ancient era—and it just feels old! You’ll catch yourself peering over your shoulder to glimpse a dinosaur …

Volcanoes and other cool stuff At Springbrook, you’re standing on what was the side of an ancient vast volcano, some 23 million years ago, centred on Mount Warning.

Eruptions poured lava over the landscape, then, over time, weathering and water erosion sculpted the perpendicular cliffs of the Tweed caldera (volcanic crater) that you see from the Best of all lookout.

Now, gather your young explorers for more adventure and head over to Canyon lookout. You’ll see Twin and Rainbow falls and the sheer walls of The Canyon, also the result of millions of years of erosion, landslides and weathering.

At the end of the road you’ll find Goomoolahra Falls lookout track, where the kids can stand at the lookout beside this cool 60m high waterfall.

From your camping area, follow a short track to a lookout over the coolest waterfall of them all—Purling Brook Falls. If you have older explorers (who can safely walk 4km on tracks with sheer cliff edges), tackle the Purling Brook Falls circuit, where you’ll descend into the gorge, cross a suspension bridge, then climb back up again.

Hear the stories of Gondwana You’ll be mesmerised by the huge mural, Remnants of Gondwana, an artist’s impression of a landscape that stretches the whole of the Pliocene era—5.3 million years ago up to today. The kids will be challenged to find the 52 different animals in the mural and solve the puzzles posed to them. Hint: Grab the cheat sheet so you can help them!

Here’s an example: There are some strange birds in the rainforest that don’t lay eggs yet are hatched from eggs. What kind of birds are these?

Then send the kids out to the play shed—here they’ll experience school yard games from last century—the centre was Springbrook’s first school, built back in 1911!

You’ll also gain an insight to the special cultural connections of Springbrook—the Yugambeh language and history of the area. Find out how the Yugambeh Aboriginal people knew when a different season was approaching and hear the stories that explain how birds got their colours and song. You’ll be sure to see the rainforest through new eyes after this!

Other wild and wonderful things Springbrook has a wild side! Young explorers will love watching pademelons (small rainforest wallabies) pottering around picnic areas or on grass verges in the late afternoon. In the creeks, help them look for frogs, long-finned eels and blue spiny crayfish (found only in Springbrook and Lamington national parks), and beautiful dragonflies darting above the water. Organise a night spotlighting expedition around the camping area to look for nocturnal possums and gliders.

If your young explorers are looking for more wild (life) adventure, hop on board a tour with a commercial operator (or visit the site yourselves) to see Springbrook’s glow-worms at Natural Bridge. Glow-worms, too, are primitive animals—larval stages of a small fly that originated in the rainforests of Gondwana. Once again, you’ll get that ‘Jurassic Park’ feeling as you walk along the Natural Bridge track amongst tall hoop pines—living relics (‘plant dinosaurs’) of the Jurassic period about 180 million years ago. Then you’ll arrive at the arch-like cave where thousands of glow-worms' tiny green lights cover the cave ceiling, like a blanket of twinkling stars. Magical.

If you can’t manage a glow-worm tour, the kids could always star gaze and pretend the stars are glow-worms…

You simply can’t pass up this chance for a Jurassic Park sleepover for the whole family! What’s more, when you’re there you can stay connected with the modern world via the free QldParks-Wifi hotspot at Gauriemabah, and link to online camping bookings as well as learn more about the national park and the Gondwana Rainforests of Australia World Heritage Area.

Oh, and did you figure out the kids’ puzzle? The answer is: Male birds!

Get some more time-travelling tips by visiting Springbrook National Park, and find out more about camping in the Gondwanan rainforest by visiting The Settlement camping area. Remember to always check park alerts before you go.