Long hikes in Lamington take you back through time
Issued: 20 Dec 2019

Have you ever wondered what it would be like to step back in time, not hundreds of years but millions?

Have you ever wondered what it would be like to step back in time—not just hundreds of years, but millions?

Taking a long (full or half day) hike through World Heritage-listed Lamington National Park is like a journey through time. Here, remnants of ancient forests from the Gondwanan era survive in the towering hoop pines, Antarctic beech trees and king ferns that have lived here since prehistoric times!

Luckily, your time machine doesn’t need to go far. Lamington is a mere 2-hour drive south of Brisbane or a scenic 90-minute trip from the Gold Coast, but once you’re there, you could be a world away. Or even an ‘era’ away. 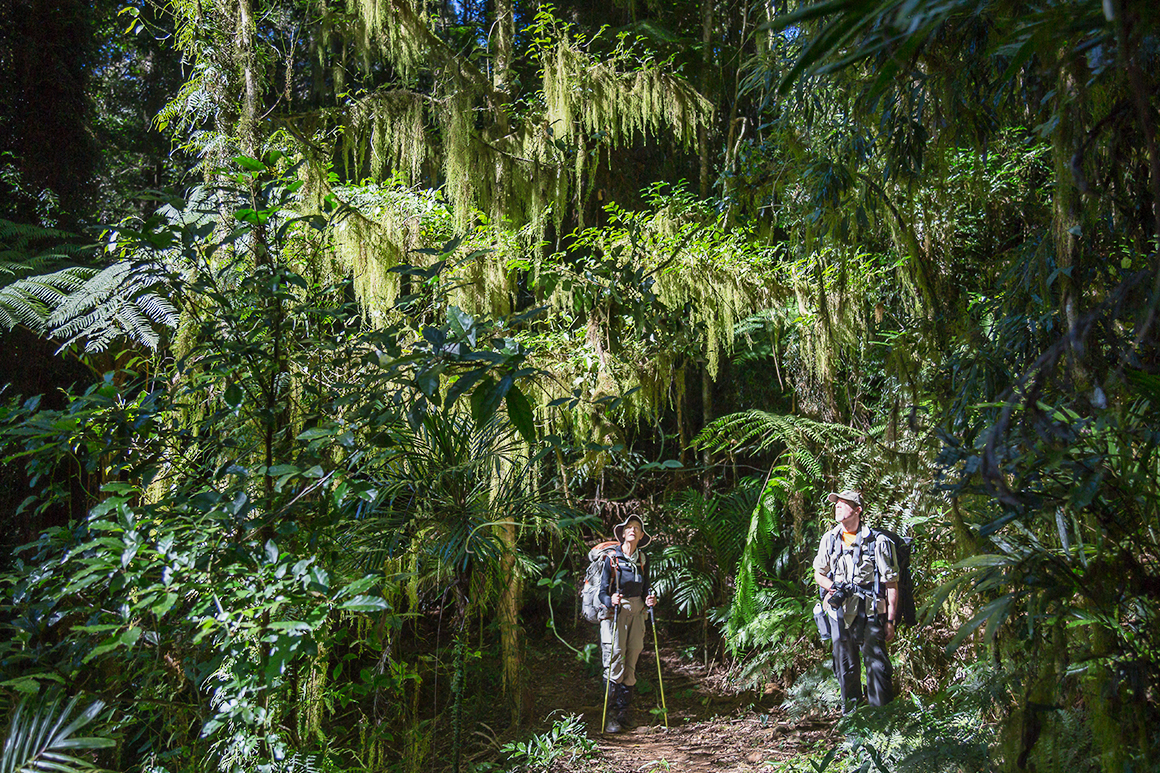 Picture this—the ancient subcontinent of Gondwana is made up of ‘jigsaw pieces’ that (roughly) resemble the continents of Africa, South America, India, Australia and Antarctica.

Around 120 million years ago, Gondwana begins to break up. Eventually, Australia begins to move north, and our climate becomes warmer and drier—the cool damp rainforests that once covered Gondwana all but disappear. Our unique (dry-adapted) plant species—acacias and eucalypts—begin to develop, making way for a wealth of wildlife to follow.

The result? Pockets of remnant ancient rainforest stand as reminders of that long-ago era, when ferns, then pines, then flowering plants first appeared. Today, Lamington National Park, in the Gondwana Rainforests of Australia World Heritage Area, provides a refuge for these prehistoric survivors.

And that means … time travel is possible! With around 16 full-day hikes, along with a handful of half-day walks—in all, more than 130km of tracks—Lamington offers many time-travelling itineraries! Here’s just a sample of possible destinations.

Earlier even than Gondwana 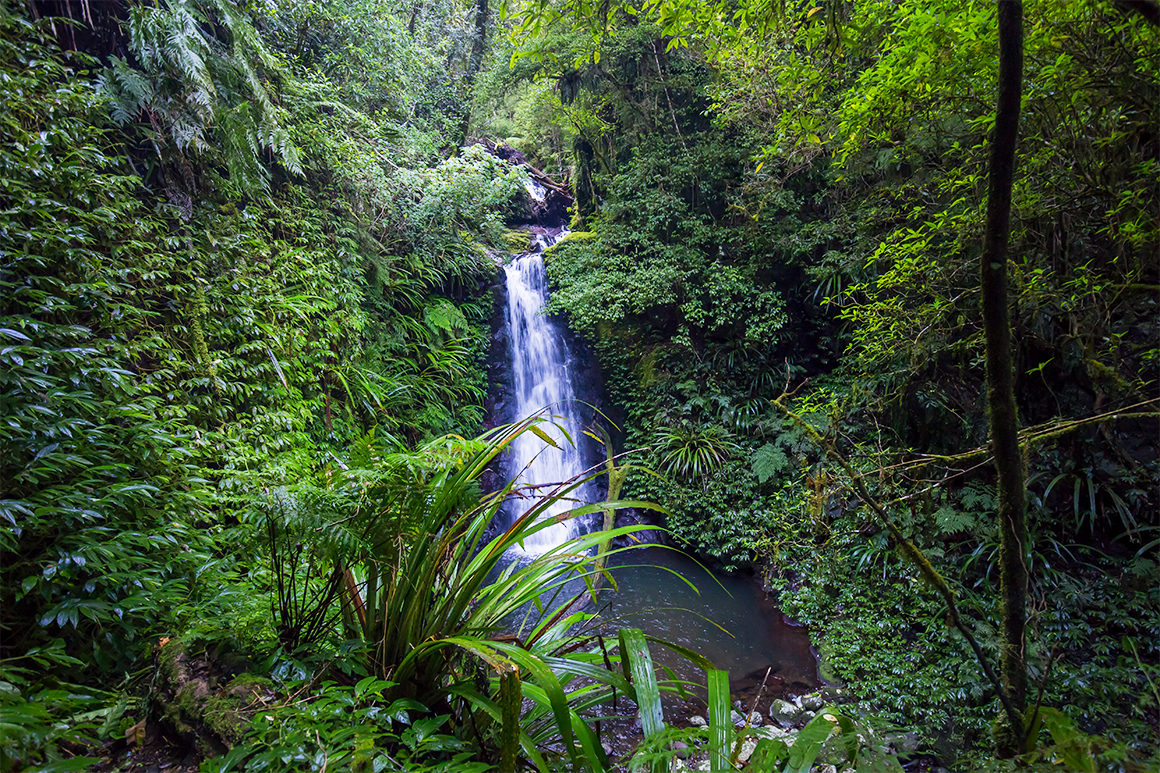 Our first stop on the time-travel itinerary is the Carboniferous Period (359 to 299 million years ago). That’s even before Gondwana formed! It was during this time that ferns evolved (aka the Age of Ferns). Step onto the Toolona Creek circuit (17.4km, 6hrs return) in Green Mountains, where the narrow Toolona Gorge creates a protected moist and shady refuge.

Discover the king fern, a living relict of one of the oldest fern families. You’ll also see many ancient flowering rainforest plants, such as primitive Antarctic beech, which once covered the continent, providing habitat for many animals, such as dinosaurs, that have long since disappeared … 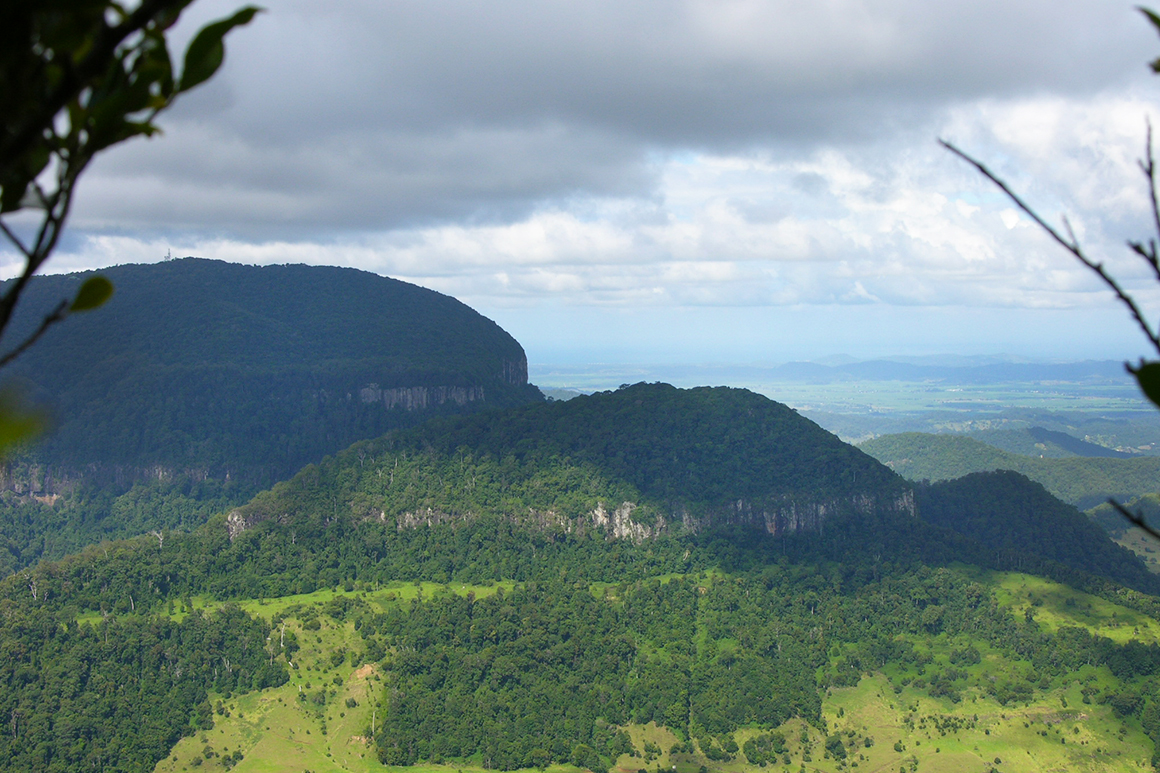 Next stop is the Jurassic Period (201 to 145 million years ago). We’ve landed in the Age of the Conifers. Step out onto the Araucaria lookout track (17.8km, 7hr return) in the Binna Burra section of the park and discover one of the world's most ancient and primitive conifers, the hoop pine.

Ramble through dripping rainforest and up moss-carpeted steps to Orchid Bower then onto the Araucaria lookout. Here you’ll gaze at views of one of Australia's largest remaining forests of hoop pines (Araucaria)—thin, shadowy forms ranged along the mountainsides and ridges of the Darlington Range. Lamington is one of the most significant centres of survival for hoop pines. Like king ferns and Antarctic beech, hoop pines have endured events in geological time that saw dinosaurs and three-quarters of all living species disappear. Amazingly, they are still here!

So old you can feel it Third stop on our time-travel itinerary is the Cretaceous Period (145 to 66 million years ago). This is the Age of Angiosperms, when flowering plants first appeared. Head to the Mount Hobwee circuit (18.2km, 8hrs return) in Binna Burra. Wind up through rainforest on a track flanked by abundant stream lilies, take a breather at Darrayabroo lookout then travel onwards and upwards through an Antarctic beech (Nothofagus) forest. These evocative trees, dripping with moss, just feel ancient.

When you reach the 1163m summit, sit for a moment and ponder the fact that today’s Antarctic beech trees are little different from the flowering plants that flourished in Gondwana 100 million years ago. Lamington provides an outstanding record of the Age of Angiosperms—Nothofagus is just one of many ancient flowering plants found here.

Change is in the air Last stop on our itinerary and a change is in the air. Can you feel it? We’ve landed in the Cenozoic Era, around 60 million years ago. Australia has now separated from Gondwana, and is slowly moving north. Warm moist forests cover the continent but as things warm up, new flowering plants—acacias and eucalypts—appear, adapted to the new dry climate.

Explore Daves Creek circuit (12km, 4hrs return) in Binna Burra to witness this change in vegetation, from subtropical rainforest to warm temperate rainforest with ancient flowering plants, to open forest with giant eucalypts such as New England ash and colourful montane heath. The story of the diversity of Lamington’s plant life is laid out before you! These hikes are just some of the journeys you can take to time-travel deep into Lamington’s ancient past.

Before you set out keep in mind that, like time-travel, hiking in Lamington requires some preparation and caution—the area is remote and conditions can change rapidly. Take the right equipment and wear appropriate hiking gear, such as ankle-supporting boots.

Find out more about exploring the beauty and timelessness of Lamington National Park and always check park alerts before you set out for the latest information on access, closures and conditions.