Roll up, roll up! You’re about to meet the show-stopping performers of our Gondwana World Heritage Area rainforest!

Roll up, roll up! You’re about to meet the show-stopping performers of our Gondwana World Heritage Area rainforest!

We’re not talking famed singers or dancers—or even our park visitors!—rather the spectacular wildlife of Lamington National Park. This biodiversity hotspot is home to more than 460 species, including over 65 mammals and 150 subtropical birds.

Many of these performers are simply dazzling, hugging centre stage with the most colourful costumes imaginable! Others are more cryptic and stay backstage out of the limelight, while others again take on small 'cameo roles', being extremely rare or only found in this particular part of ancient Gondwana rainforest.

Best of all, you can see them for free. No cover charge! Come on, let’s meet ‘em! 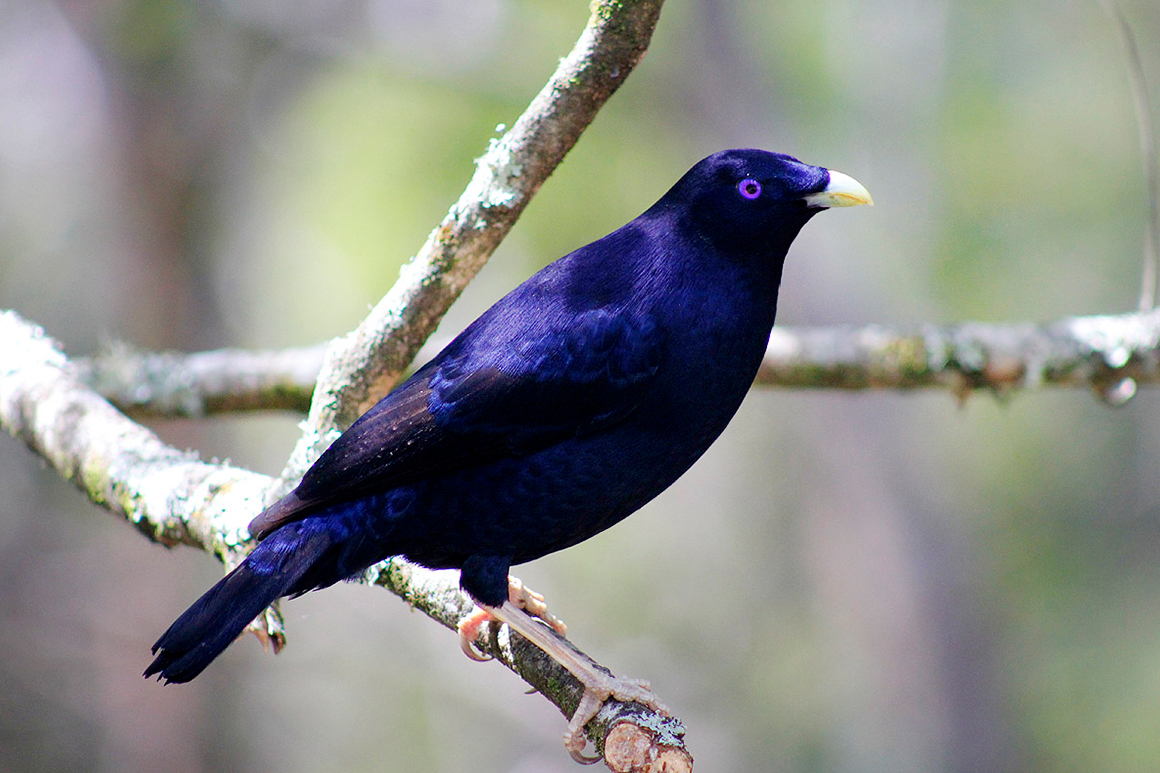 Satin bowerbirds, especially the males with their elegant glossy blue-black plumage, love centre stage, in fact they even build their own stage sets! The male constructs a ‘bower’ from sticks, tastefully decorated with bright blue objects, for his courtship performance. This song and dance routine is designed to entice the somewhat drab olive-green female into the bower to mate. Summer breeding season is the time to enjoy these avian antics. However, keep your binoculars poised because you can glimpse satin bowerbirds foraging on the forest floor year round. 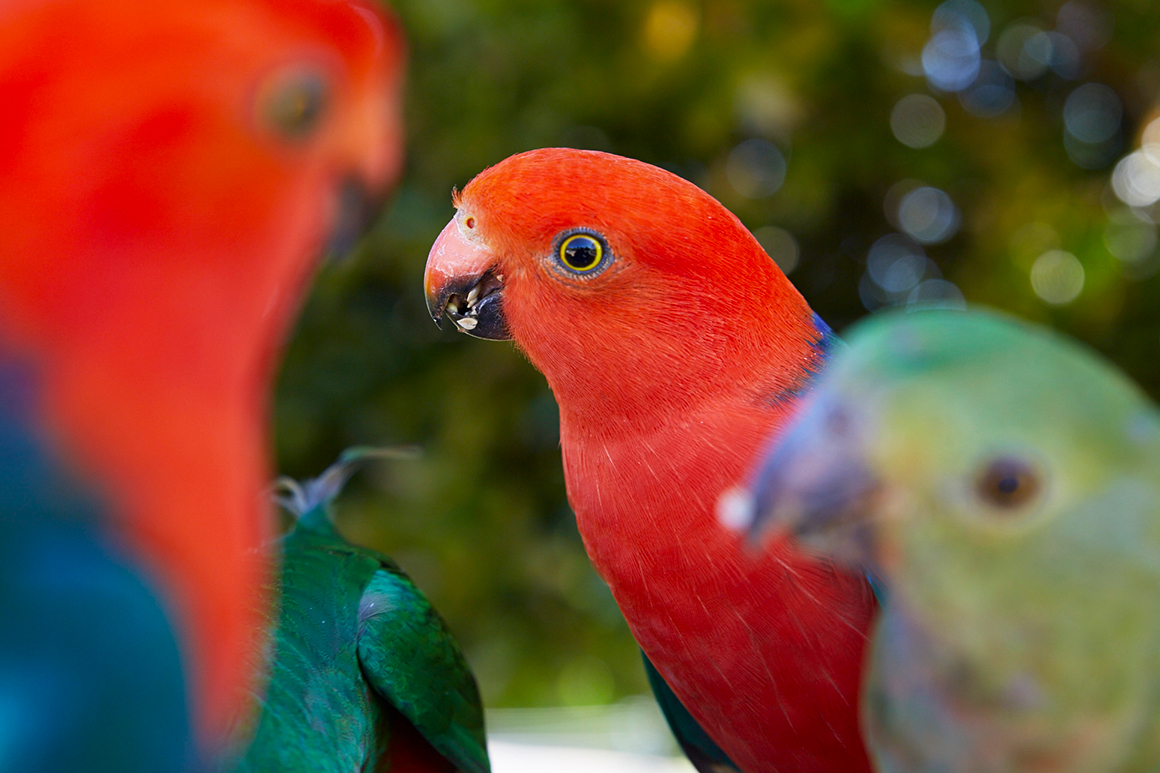 Rangers’ tip: Bowerbirds belong to an ancient group of birds known as songbirds. Look and listen for other songbirds such as regent bowerbirds, eastern bristlebirds, rufous scrub-birds and red-browed treecreepers, along with your colourful birdwatching ‘faves’ such as crimson rosellas and Australian king-parrots. 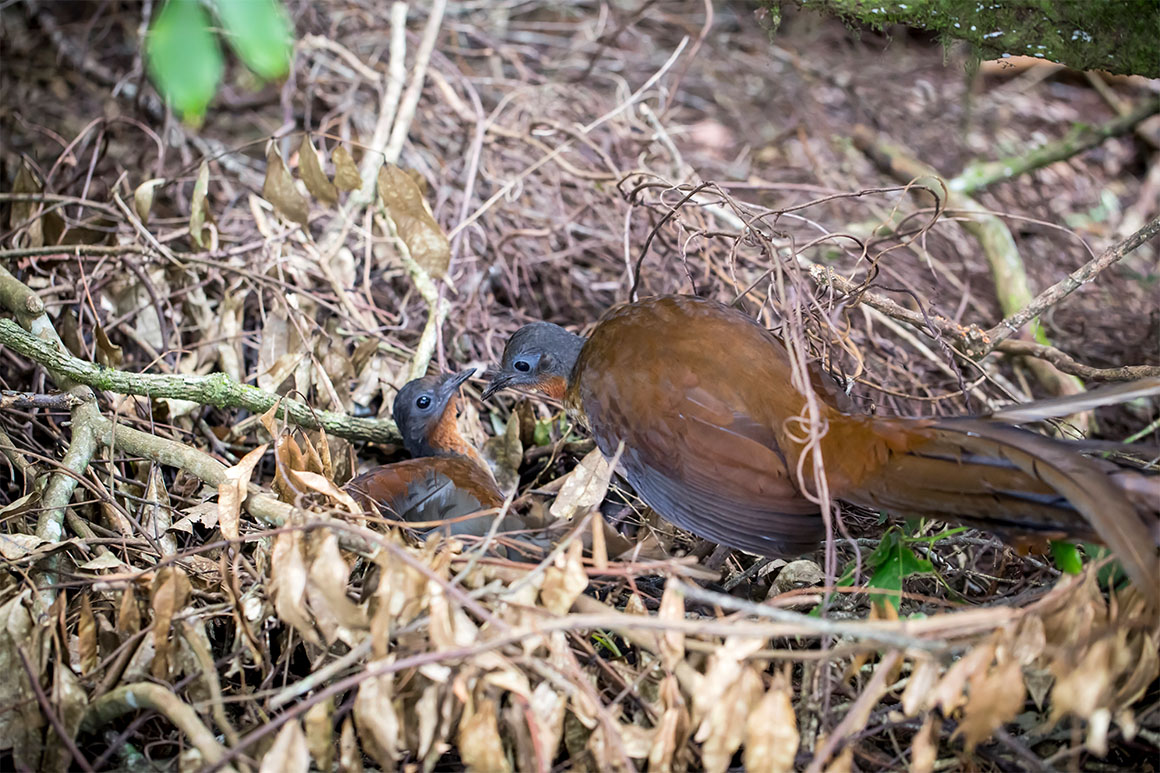 For this star performer, another of Lamington’s ancient songbirds, you’ll need to switch to video and record the spectacular, almost opera-worthy sounds of a rare Albert’s lyrebird. Witness his unmistakable voice filtering through the forest and perhaps glimpse his tail feathers—long ribbon-like dark brown plumes—as he fossicks on the forest floor. More likely to be heard than seen, these shy but clever copy-cats have a unique call interspersed with the mimicry of other birds.

Rangers’ tip: Your best chance to see an Albert’s lyrebird performance is during winter breeding season; but be warned of this songbird’s territorial instincts! To view this prickly performer, search in creek crossings or look closely around the damp forest floor during summer to spot the tell-tale spikes and vibrant blue of Lamington’s spiny crayfish. These colourful crustaceans have been known to travel more than a kilometre overland between freshwater streams. You won’t find them anywhere else in Australia!

They are rare and protected under Queensland law from poachers. Which holds a hefty penalty for anyone caught poaching them!

Rangers’ tip: Don’t ask this fellow for an autograph—keep your distance as his claws can deliver a painful nip! 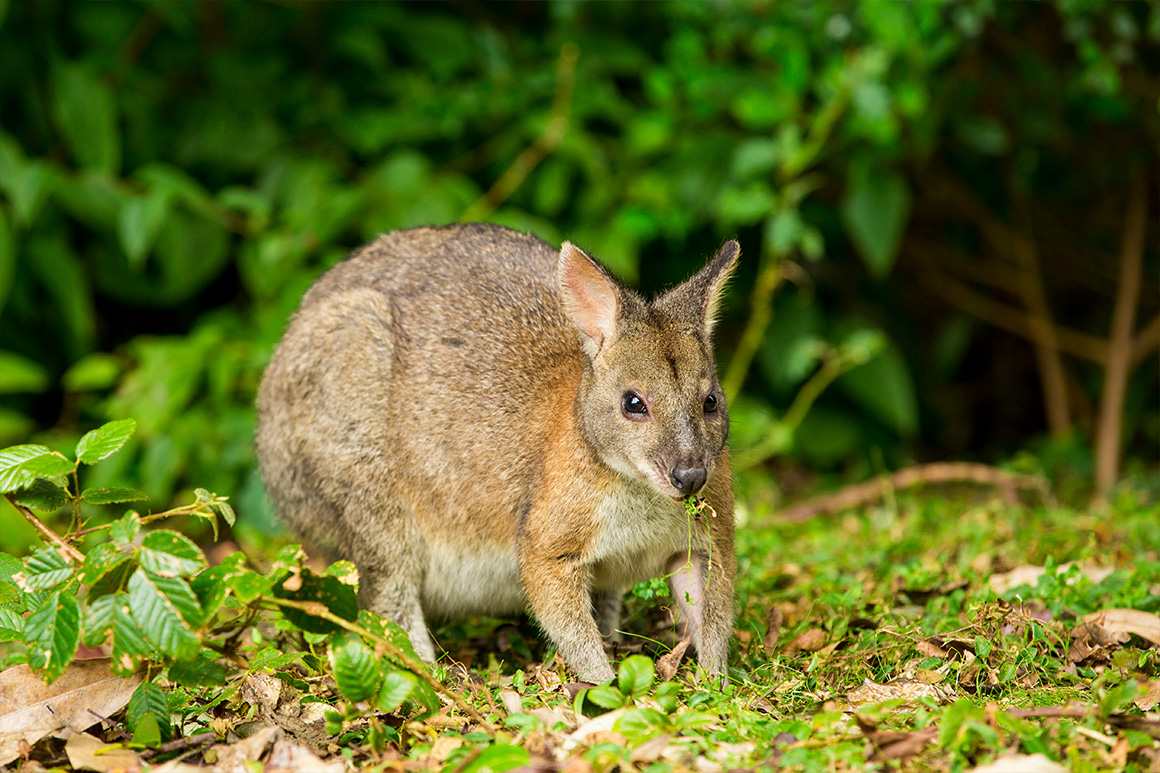 A shy performer, the nocturnal red-necked pademelon keeps to itself and shuns the limelight. You will probably glimpse this small rainforest wallaby grazing roadside on the steady commute to Binna Burra. Sometimes mistaken for a kangaroo, these little wallabies have brown-grey fur with a red tint around the neck, shoulders and forehead. Fingers crossed, you may even see a mother and her snug joey.

Rangers’ tip: Best time to see the bashful pademelon is dusk when they emerge from the forest cover to feed in open grasslands. An elusive entertainer these days, but thankfully the rare and endangered Fleay’s barred frog is still found in Lamington. Between July and March each year listen to the unmistakeable recital of distinct ‘arrr’ growling calls as these frogs breed in the park’s flowing streams. These brightly-patterned little fellows—light brown in colour with dark splotches—are named after conservationist Dr David Fleay and have been a focus of research and protection in Queensland for many years.

Rangers’ tip: Be frog-friendly—make sure not to disturb or remove rocks or trample vegetation near creeks. Keep your eyes peeled for a rare sighting of this colourfully-costumed performer. Richmond birdwing butterflies boast an impressive wingspan as big as your mobile phone. These picturesque beauties are most likely spotted flitting around the Lamington Visitor Information Centre during the warmer mid-summer months. Males sport the impressive ‘green and black’ livery, while females are dark brown with white and yellow patterns. Once abundant in the suburbs of Brisbane, Lamington’s sub-tropical rainforests are now an important refuge for these exquisite insects.

David Fleay Wildlife Park on the Gold Coast is home to a captive breeding program to help ensure these critters have a future as bright as their wings! 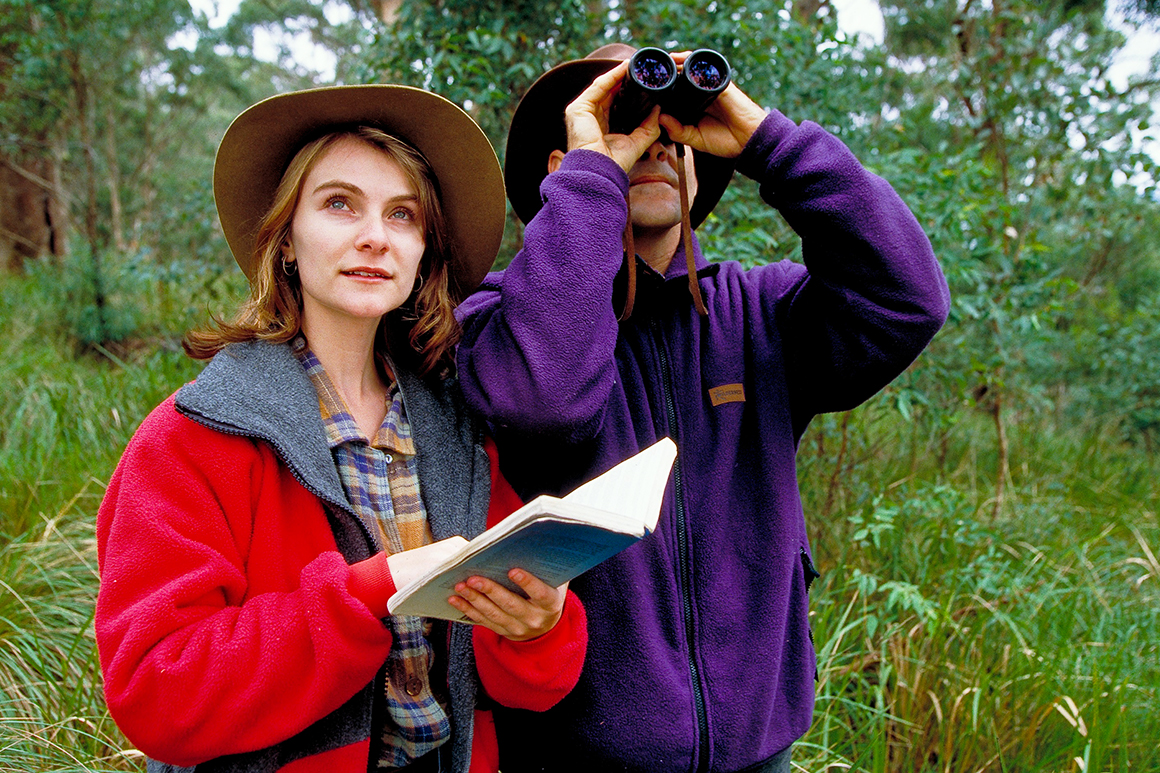 There’s so much more to discover in this iconic national park and World Heritage area!

Find out more about Lamington National Park and always check park alerts before you head out for the latest information on access, closures and conditions.