Dinosaurs and diprotodons—uncover fossil mysteries of the ancient past in Queensland’s Outback
Issued: 19 Nov 2018

The vast red landscape of western Queensland is a time capsule of our prehistoric past, waiting to be discovered.

The vast red landscape of western Queensland is a time capsule of our prehistoric past, waiting to be discovered.

There are many trails of discovery that you can take through Queensland’s outback parks and forests—your options are almost as endless as the fossil specimens you will find there. Here we’ve pulled together some suggestions to appeal to the dinosaur-delvers and fossil-fossickers amongst us! And, of course, anyone who has a fascination with our ancient past (and who doesn’t?).

If you want to walk among unique dinosaur tracks, uncover layers of prehistory carved into rock and search for ancient fossils at a world-famous archaeological site, make sure to add these parks to your Outback bucket list. Happy exploring!

1. Delve into the dinosaur era at Lark Quarry 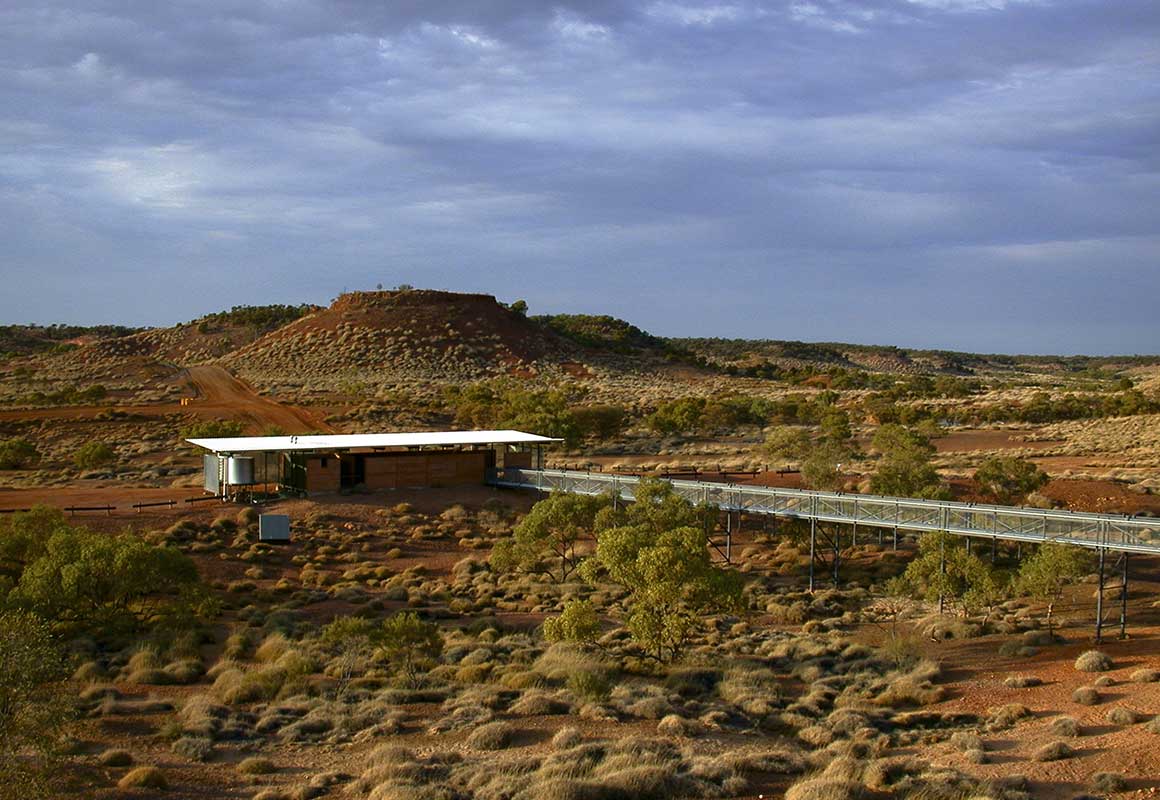 Venture into ‘jump-up’ country, about 100km (2hrs) south-west of Winton (4WD recommended, although the unsealed road is also suitable for conventional vehicles), to come face-to-face with ancient (and we mean ancient) history at Lark Quarry Conservation Park. As you rollercoaster across ancient mesas (flat-topped hills known as ‘jump-ups’), gullies and steep escarpments formed over millions of years of erosion, you’ll perhaps get an inkling of what’s in store.

You’ll arrive at the site of the world's only known dinosaur stampede site, nowadays protected inside a solar-powered shelter, the Dinosaur Stampede National Monument.

Here, you’ll be transported back to a prehistoric age—the site reveals a snapshot of history 95 million years in the making! Gaze in awe at more than 3,300 dinosaur footprints embedded in a fossilised rock face, thought to be the result of a dinosaur stampede—a paleontologist’s paradise!

Do you remember similar scenes in Steven Spielberg’s ‘Jurassic Park’? Apparently, Lark Quarry was the inspiration! (And yes, ‘life has found a way here’). Very recently, an alternative to the ‘stampede’ theory has been proposed, suggesting the concentration of footprints was made by a flock of small two-legged dinosaurs moving around a natural river crossing…in no particular hurry!

Whatever happened all that time ago, sandy sediments covered the tracks, the mud dried, and 95 million years later (think 1960s) they were discovered by a station manager in the nearby Seymour Quarry and later excavated by The University of Queensland and the Queensland Museum. 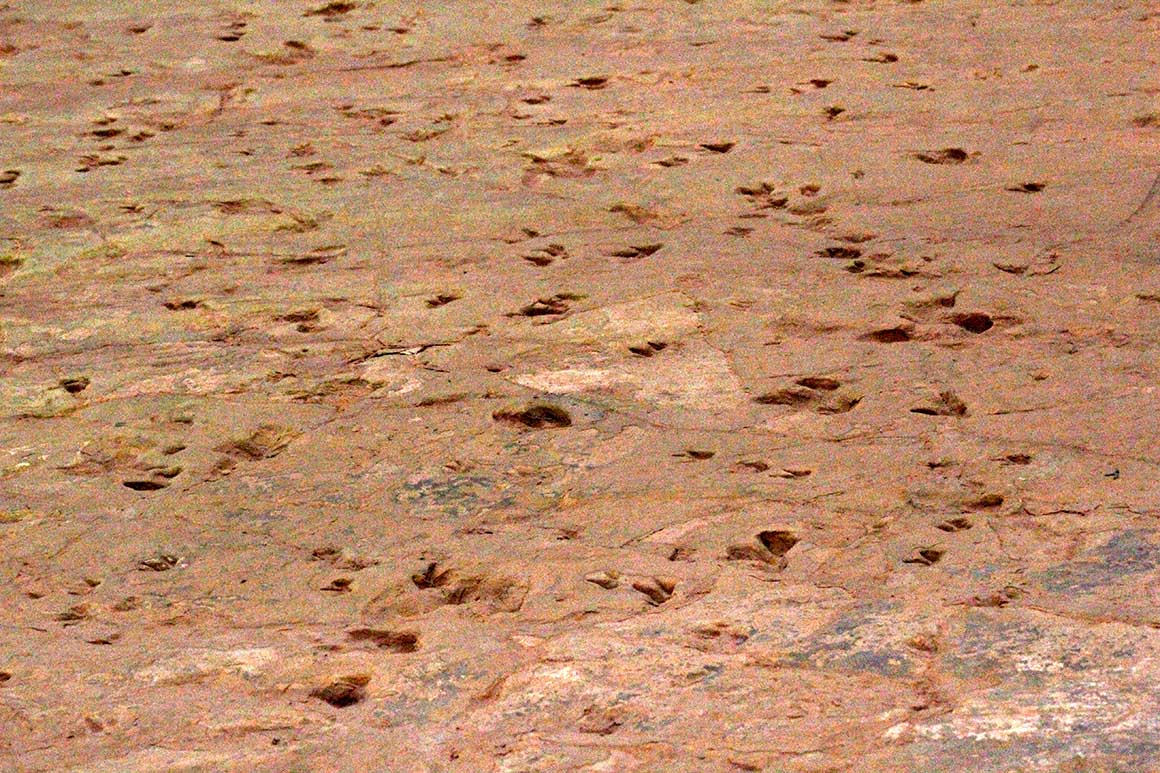 Belonging mostly to chicken-sized Skartopus and emu-sized Wintonopus dinosaurs, there are also footprints from larger dinosaurs, thought to be a carnivore, the intimidatingly-named Australovenator, and an herbivore similar to the Muttaburrasaurus (kids love saying that one!). Sorry, no T-Rex!

Lose yourselves in the dinosaur trackways for an hour or more, then, if you’ve come prepared with a lunch esky and walking shoes, there’s more fun in store!

Explore ‘jump-up’ country by foot on the 500m Spinifex circuit and capture views over the Mitchell grass downs to the east and the channel country in the west. If you are fit and experienced walkers, check out the 3.5km Jump Up Loop, an unformed cross-country track (subtle track markers point the way). You’ll skirt several gullies and climb along the western escarpment, spotting wallaroos and lizards along the way. The views over the sprawling landscape and red earth escarpments from the top of the ‘jump-ups’ are well worth the walk. It’s best walked in the cooler part of the day, though!

Access to Lark Quarry’s dinosaur trackways is by guided tour only and a fee applies (but you can enter the park free of charge, of course). Find out more about Lark Quarry Conservation Park. Always check Park alerts before you set off. Call Winton Shire Council to check road conditions, particularly after rain.

2. Drift along the Dinosaur Trail Lark Quarry is in the middle of ‘dinosaur country’ so while you’re here, make sure you check out these other attractions on the Dinosaur Trail, an outback circuit connecting Winton, Hughenden and Richmond:

3. Dive deep into an ancient landscape at Porcupine Gorge 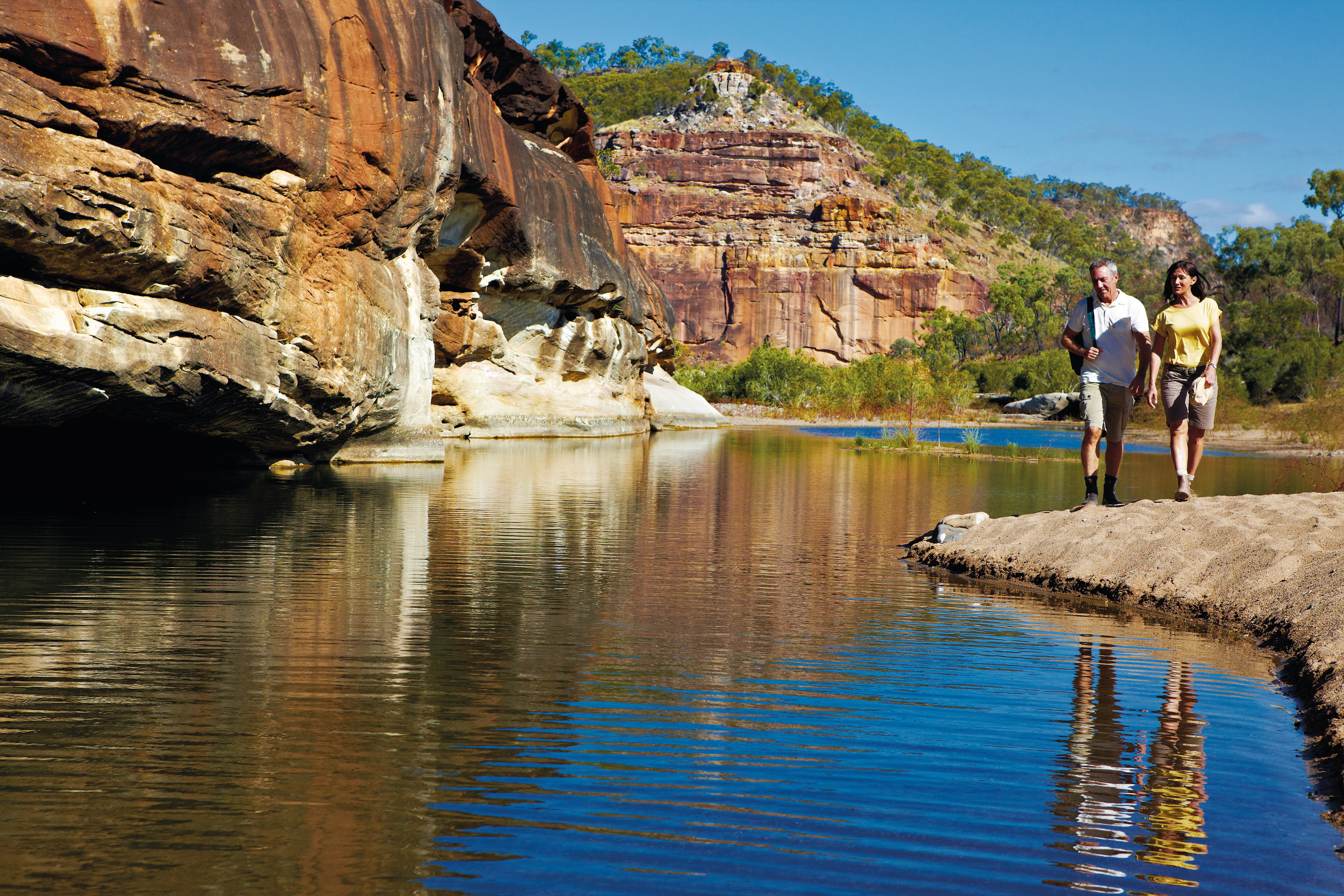 ‘Layer upon layer’ of history is revealed the deeper you walk down into Porcupine Gorge, our very own ‘Little Grand Canyon’. Porcupine Gorge National Park, 60km north of Hughenden, is a surprising discovery in a flat savanna landscape, and a great place to doss down for a night or two on your trail through the Outback.

Find out more about Porcupine Gorge National Park, and camping in the Pyramid camping area. Make sure to check park alerts before you set off.

4. Discover diprotodons and other fossils at Riversleigh 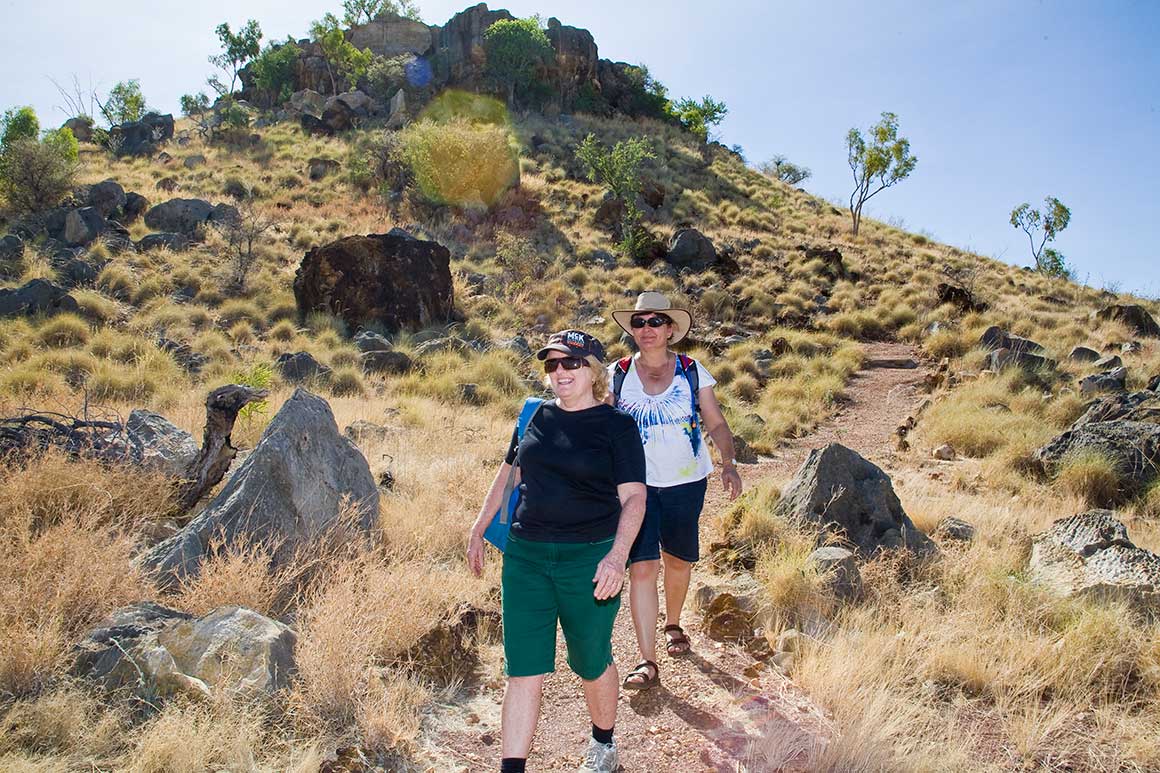 Not that we want to boast, but the Riversleigh World Heritage site, at Boodjamulla (Lawn Hill) National Park, in the far west of the state, is one of the most significant fossil deposits in the world and the richest known fossil mammal deposit in Australia!

So grab your water bottles, clamp on your hats, lace up your boots and set off early to beat the heat. Follow the 800m Riversleigh Fossil trail as it winds up to the top of the limestone outcrop. Now, it’s hard to imagine, but Riversleigh was once a lush rainforest scattered with freshwater lakes and this outcrop was once mud at the bottom of one of these lime-rich lakes.

The trail will take you past a selection of well-preserved fossils—a 25 million-year-old collection of creatures that once lived in and around this ‘lake’. These fossils are a record of the evolution of life in Australia following the breakup of the ancient continent of Gondwana, and the reason the site is inscribed on the World Heritage list.

Ready to find some fossils? Here’s a taste of what’s in store for you: 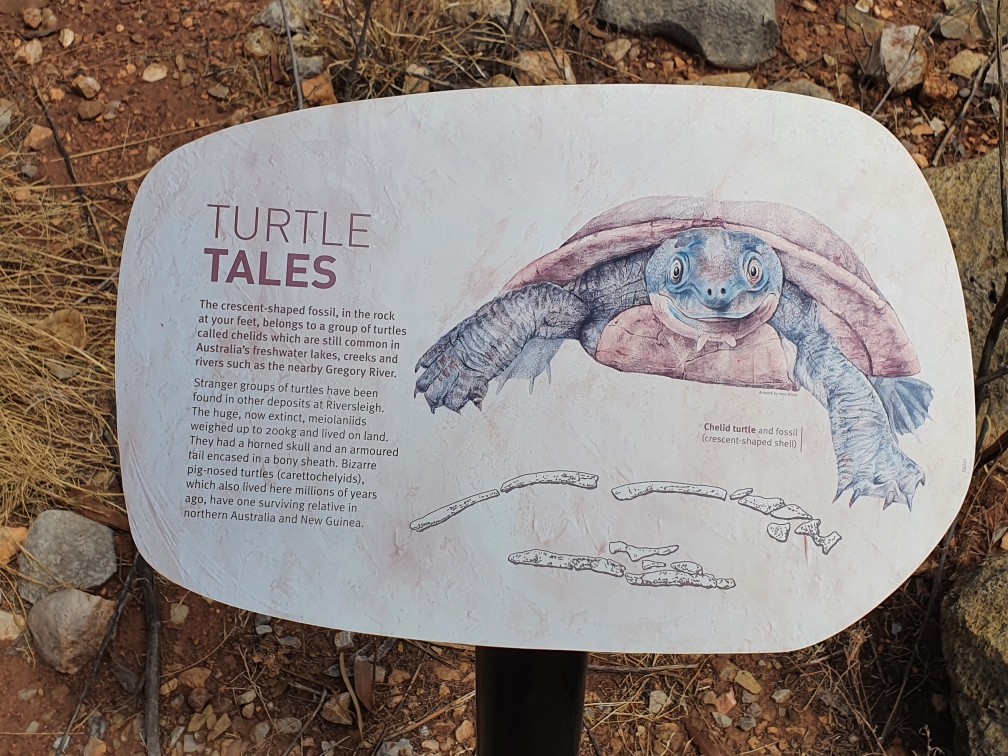 Take your time to read through the informative signs along the way and fully appreciate this incredible site, part of the Australian Fossil Mammal Sites World Heritage Area. If you prefer, you can also join a commercial tour to learn more from expert guides.

And, of course, if you’re visiting Riversleigh, you’ll want to camp in Boodjamulla (Lawn Hill) National Park, where you can seek respite from the heat and relax in the cool oasis of the gorge—walking, canoeing, swimming…ahhh!

Find out more about Riversleigh World Heritage Site, and check out all your activity options, including camping, in Boodjamulla (Lawn Hill) National Park. Always check park alerts before you head out. 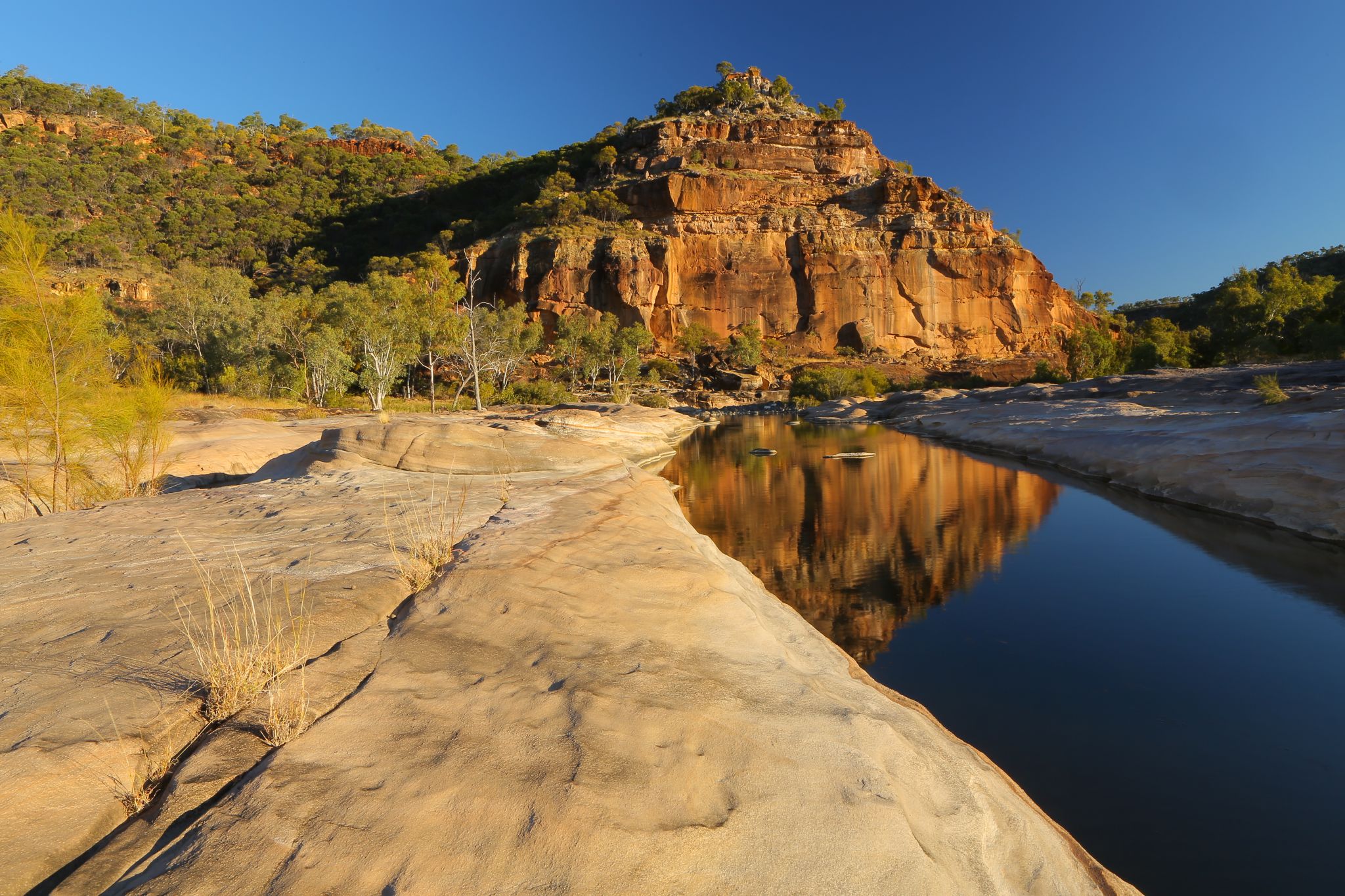 Your Outback adventure beckons, so get ready to go exploring! Check out other outback parks to extend your itinerary!