Hoop pines are also a feature of dry rainforests, jutting out high above the canopy.

Impressive hoop pine Araucaria cunninghamii plantations grow side-by-side with a suite of native eucalypt forests and rainforest communities. Yarraman State Forest is managed not just for timber production, but also to protect the habitats of many plants and animals—including some rare and threatened species and others with high regional conservation priority.

Often there are transition zones where the rainforest has begun invading the open forest. Nanango ironbark Eucalyptus melanoleuca and other eucalypts cannot regenerate once the rainforest takes over. If a severe fire were to push back the rainforest boundary, open forest plants would be able to recolonise. Then the rainforest would begin its invasion again until its next major setback. In places, rainforest plants are 'moving in' under tall eucalypt trees.

Vine scrub is host to a great diversity of plant and animal life. Green catbirds, paradise riflebirds and noisy pittas are species of significance found locally. Depending on the season, regent bowerbirds can sometimes be seen as a flash of vibrant orange and black, and the ringing calls of rufous whistlers can be heard.

Look in branches for delicately suspended scrubwren nests made of lichen and plant material, and on the ground for brush turkey mounds or the cone-shaped diggings of bandicoots searching the soil for invertebrates, tubers and seeds.

Dense vine scrub and thickets of lantana make this a major habitat area for the shy and vulnerable black-breasted button-quail. Dish-shaped scrapes in the dirt are the tell-tale signs that these secretive birds have been searching for food on the forest floor. You are more likely to see the feeding scrapes of black-breasted button-quails than the birds themselves.

Night is the realm of gliders, bats and owls. The golden-tipped bat is a near-threatened species known to occur in Yarraman State Forest. Sugar gliders, greater gliders and koalas have also been recorded. The vulnerable powerful owl lives here, as do southern boobook owls.

Patches of grass adjacent to rainforest are visited at night by red-necked pademelons. Red-legged pademelons also inhabit Yarraman State Forest and rufous bettongs emerge from their grassy nests to feed on tubers and fungi under the cover of darkness.

It may be surprising to note that 20 species of frogs have been recorded in Yarraman State Forest, including treefrogs, burrowing frogs and the near-threatened green thighed frog Litoria brevipalmata. 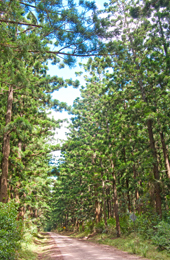 Prior to European settlement, the Wakka Wakka people of the South Burnett and other neighbouring groups lived and moved through the landscape. Careful stewardship maintained a balance between human need and the land.

Every two or three years, thousands of Aboriginal people travelled from far and near to bunya festivals held in the Bunya Mountains and Blackall Ranges. The festivals coincided with heavy crops of bunya ‘nuts’, and were times for ceremonies, trading, law-making and settling disputes. People travelled to these gatherings along ancient pathways through the region. 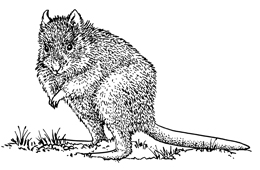 Rufous bettongs are small wallaby-like marsupials that are active within the forest at night.

Stone arrangements, axe-grinding grooves, stone axes, flakes and cores and bora grounds are known from the Maidenwell, Tarong and Nanango areas—tangible evidence of a rich and permanent culture. Bora grounds were often located near natural features or pathways and were important sites for ceremonies and where elders would meet to discuss territorial disputes and infringements of the law.

This ancient way of life, like the landscape itself, was disrupted and changed by the arrival of Europeans.

The white settlers who arrived after 1889 took up blocks divided from ‘Taromeo’ and ‘Cooyar’ pastoral holdings. They were discontented with the thickness of ironbark forests, vine scrubs and pine belts studding their properties. Towering forests fell under the axe to make way for pastures and grazing livestock.

By 1902, an Australia-wide demand for timber was heard and farmers found themselves either sellers or haulers of unsuspected ‘wooden wealth’. Comparatively little of what had previously been regarded as a liability was left. Vine forests are a form of dry rainforest where the understorey is thick with prickly shrubs and vines.

Lars Andersen’s sawmill was established at Blackbutt in 1903—the first of many in the district. Almost within weeks the district’s first township sprang up. Yarraman town came later, following the opening in 1912 of the Queensland Pine Company mill, built to tap into one of the best pine forests in Australia. The railway provided greater access to coastal timber markets, arriving at Benarkin and Blackbutt in 1911 and Yarraman in 1913.

With the waste of timber in the early days and huge demand during the timber boom, natural stands of timber were severely depleted. Ironically the first reservations of timbered lands were made near railway lines to provide ready access to supplies of hardwood for railway use. The first land reserved in the district was 12,140 hectares near Benarkin (east of Blackbutt) in 1901 at the height of the timber boom. Yarraman State Forest was declared later that year, after a concerted campaign by forestry interests over the gently sloping land vigorously sought by dairy farmers.

The relative silence and solitude of Yarraman State Forest today disguises what a busy place it once was. Rogers Park was the site of the overseeing forester’s home. Further west, in an area known as Stables Camp, there was a barracks for forestry workers. Up to 50 workers used it as their base from which to plant and tend the forest plantations. Now overgrown, Stables Camp was also a stabling area for the horse teams that hauled hoop and bunya pine logs to a nearby tramway. Gravity alone propelled the tramway wagons laden with timber to the mill in Yarraman. Locals claimed that it was the wildest roller-coaster ever built—wagons racing down the hills to gain momentum to climb the next rise. Now-days all timber is removed from the forest by trucks.

A variety of other native and exotic timber trees have been trialled in Yarraman State Forest to determine those best for planting as commercial crops. Plantation thinning in the Benarkin/Yarraman area became available in 1948 and sales of final crop plantation pine began in 1983. Plantation pine is still milled at Yarraman today.

The halcyon days of the peak of the timber boom have passed, but the timber industry and numerous State forests and timber reserves dotted throughout the hills remain important features of the district’s economic, social, recreational and natural landscape.