Rainforest trees are festooned with creepers and climbers. 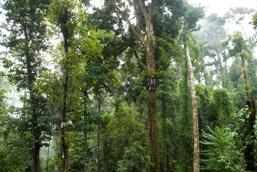 The Palmerston rainforest is lush and diverse. 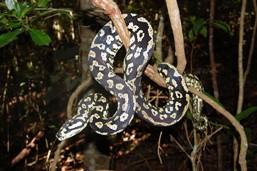 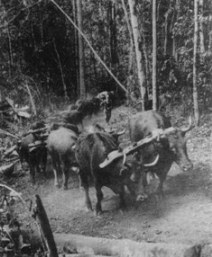 Bullock teams were the early form of transport as the region developed. Picnicking at sites along the Palmerston Highway has been popular since the early 1900s.

Wooroonooran National Park is within the Wet Tropics of Queensland World Heritage Area. Proclaimed in 1988, the World Heritage Area is almost 900,000ha and extends for about 450km between Cooktown and Townsville. The area’s vegetation is primarily tropical rainforest, but also includes open eucalypt forest, wetlands and mangrove forests. The area meets all four natural criteria for World Heritage listing. These criteria recognise the area’s exceptional natural beauty and the importance of its biological diversity and evolutionary history, including habitats for numerous threatened species. The area also has cultural significance to the Aboriginal people who have traditional links with the area and its surrounds.

Geologists estimate that the oldest rocks in the area were formed about 400 million years ago, when sediments were deposited off an ancient coastline into an area known as the Hodgkinson Basin. Over time these sediments eventually consolidated to form sedimentary rocks. In the early Carboniferous Period, about 40 million years later, sediment accumulation ceased and, with movements in the earth’s crustal plates, the Hodgkinson Basin was compressed and heated. This heat and pressure changed the chemical composition and structure of the sedimentary rocks forming metamorphic rocks such as shales, schists and quartzites. These rocks were then lifted above sea level. Known as the Hodgkinson Formation, they now form a significant proportion of North Queensland’s coastal escarpment.

From 100,000 million years ago to just 10,000 years ago, numerous volcanoes erupted across the Atherton Tableland landscape. During these volcanic episodes, basaltic lava poured down into deep valleys, blocking rivers. As the Johnstone River became blocked with basalt, water was naturally diverted to either side of the blockage, eventually forming the South and the North Johnstone rivers. On the North Johnstone River, layers of lava over 200 m thick have been measured.

The forest in this area is known as a complex mesophyll vine forest. This type of forest develops on rich, fertile, basaltic soils, a result of past lava flows from the Atherton Tableland volcanoes.

Upon entering a rainforest you will experience changes in temperature and light as it becomes cooler and darker. Wind penetration is also minimal and moisture levels are high. At ground level, buttress roots are abundant. High up in the canopy epiphytes (plants that grow on other plants without harming them), such as the basket fern Drynaria rigidula and elkhorn fern Platycerium bifurcatum, dangle from numerous tree trunks and limbs. The attractive climbing pandanus Freycinetia sp. and candle plant Pothos longipes ramble their way up tree trunks, seeking light. Along creeks and river beds look for the showy fronds of the majestic king fern Angiopteris evecta. Its leaves can reach up to 6m in length.

When wandering along the Tchupala track, trees such the milky pine Alstonia scholaris, with its light-coloured, pimply bark and long, skinny seed pods are easily recognisable. Between March and November splashes of red and yellow—the flowers from the majestic black bean tree Castanospermum australe—scatter the forest floor. In spring an abundance of white, star-shaped flowers of the red tulip oak Argyrodendron peralatum carpet the ground like snow. Unfortunately, the red tulip oak, with its beautiful, dark red timber and conspicuous buttress, has been intensively logged and mature stands are limited. The timber was prized for flooring due to its hard-wearing qualities and highly polished finish.

Other trees seen in the area include the elegant fig Ficus variegata with a smooth bark and 'flowing' buttress roots, and cluster fig Ficus racemosa with its dark, roughly textured bark. In spring and summer keep an eye out for the two-brand crow butterfly Euploea sylvester sylvester—a rich brown-black butterfly—as the larvae are dependent on the cluster fig for their food.

Mammals found in the area include striped possums Dactylopsila trivirgata, long-tailed pygmy-possums Cercartetus caudatus, yellow-footed antechinus Antechinus flavipes rubeculus and Lumholtz’s tree-kangaroos Dendrolagus lumholtzi. These mammals can be difficult to see as they tend to rest during the day and forage for food at night. The musky rat-kangaroo Hypsiprymnodon moschatus, the smallest and most primitive of the kangaroo family, is an exception, as it forages for food during the day. Watch out for this small marsupial on the forest floor. Other macropods that may be encountered include the red-legged pademelon Thylogale stigmatica and agile wallaby Macropus agilis. Visitors may also see the pretty, Palmerston variety of the jungle carpet python resting in a basket fern by day or the well-camouflaged Boyd’s forest dragon immobile on a tree trunk.

Birds are numerous. Some can be heard in the dense foliage of the rainforest, while others can be seen rummaging for food on the forest floor. At dawn and dusk, listen for the resonant call of the chowchilla Orthonyx spaldingii or the sharp whistle of the double-eyed fig-parrot Cyclopsitta diophthalma macleayana. The distinctive green back of the emerald dove Chalcophaps indica is generally spotted on the forest floor before it hastily flies off. Other birds seen include figbirds Sphecotheres vieilloti, spangled drongos Dicrurus bracteatus and Lewin’s honeyeaters Meliphaga lewinii.

The Palmerston (Doongan) section of Wooroonooran National Park is included in the traditional lands of the Mamu Aboriginal people. Located at the heart of the Wet Tropics World Heritage Area, it is a place of very high biodiversity, due to the high rainfall and fertile soils derived from basalt rocks. Today the Mamu people are involved in rainforest restoration and conservation, and have also worked on collaborative projects with QPWS. Various artworks were produced by the Mamu Aboriginal Corporation and can be viewed along the Mamu Tropical Skywalk.

In 1882 explorer and prospector Christie Palmerston was asked by the chairman of the Johnstone Divisional Board to forge a track from Mourilyan to Herberton. On entering into this agreement Palmerston wrote,

'I was to mark a track from Mourilyan to Herberton for the sum of £300…should the Government use my track for a railway the Board should add another £100, this lower sum to be paid in instalments'.

Using existing Aboriginal walking tracks and the aid of local Aboriginal people, the Palmerston track was forged in 12 days.

In 1884, the construction of the railway line was put on hold, temporarily, following the discovery of gold; no longer interested in working on the railway, all able-bodied men were instead seeking this precious metal. Henrietta Creek was one of the most productive sources—47.805kg of gold was removed in 1899.

By the 1920–1930s, timber extraction was the main source of wealth. Many pack trails were formalised as roads. They were hand-cut, filled and then compacted by a roller, with little or no gravel surface. The Palmerston track was realigned to eliminate many of the winding curves. The Beatrice to Henrietta creeks section took two years to complete, as work was hampered by rain; in 1933 only 17 fine days were recorded. By 1935 the Palmerston Road was officially opened as a sealed single lane road.