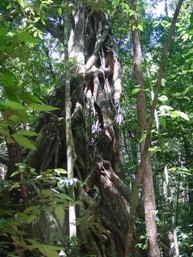 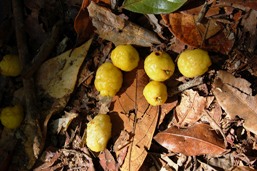 Goldsborough Valley, Wooroonooran National Park is within the Wet Tropics World Heritage Area (WTWHA). Proclaimed in 1988, the WTWHA extends for about 450km between Cooktown and Townsville. Consisting of nearly 900,000ha, vegetation is primarily tropical rainforest, but also includes open eucalypt forest, wetlands and mangrove forests. The WTWHA meets all four natural criteria for World Heritage listing. These criteria recognise the area’s exceptional natural beauty and the importance of its biological diversity and evolutionary history, including habitats for numerous threatened species. The WTWHA also has cultural significance for a number of Aboriginal people who have traditional links with the area and its surrounds.

Goldsborough Valley is fundamentally a granite landscape. From about 310 to 260 million years ago, movements deep within the earth’s crust caused large pools of molten rock (magma) to push up into the older sedimentary rocks above. Less dense (and therefore more buoyant than the rocks above it), this magma squeezed upwards. In many places this material did not make it to the surface, but slowly cooled and solidified to form bodies of granite deep underground. Gradually the older rocks around the tougher granite bodies eroded, leaving the more resistant granite rock to form the core of the present mountain ranges; one of the main granite masses became the Bellenden Ker Range.

Goldsborough Valley contains a mosaic of vegetation types, ranging from open eucalypt forest to tropical lowland rainforest. Soil type, aspect and rainfall all play a part in the type of vegetation that grows in an area. The open eucalypt forest grows on the granite soils of the lower reaches of the valley. This area receives less rain than the upper reaches because it is in the rain shadow of the Bellenden Ker Range. The lush lowland rainforest grows on the basalt soils of the upper reaches of the valley.

Strangler figs are common in the rainforest of Goldsborough Valley. These plants start life high in the branches of another tree where their seeds are deposited by bats or birds. Fig seedlings send cable-like roots down to the ground while continuing to grow up towards the light. Once in the ground, roots act as a feeding tube, supplying water and nutrients to the fig. Gradually the leaves and roots of the strangler fig grow thicker, robbing the host tree of sunlight, water and nutrients until it eventually dies. The dead host tree gradually rots away leaving the fig with a hollow centre as it grows into one of the largest rainforest trees. The process from germination of the fig to the full decomposition of the host tree can take up to 1000 years.

Red cedar trees Toona ciliata also grow in the forest here. These trees played a central role in the early European settlement of North Queensland. With the initial gold rushes of the 1870s came another race for 'red gold'—timber-getters eager to make their fortunes from the highly-prized red cedar trees. Although initially common in the forests, most of the red cedar had been felled by the 1890s. A few small red cedar trees remain here and can be seen along the Wajil walk.

Lemon aspens Acronychia acidula are another tree that grows in the rainforest of Goldsborough Valley. The lemon scent is often the first indication of the presence of these trees. Growing to around 15 m tall, they have a crown of dark, glossy foliage and bear heavy bunches of fruits on their outer branches. Their scented, creamy flowers are attractive to many birds and butterflies.

Native orchids, such as the Christmas orchid Calanthe triplicate, can also be seen in the area. These plants have a conspicuous head of pure white flowers that appear at Christmas time, hence the common name. They grow on the ground in the moister areas of the rainforest.

A number of plant species significant to the Dulabed Malanbarra Yidinji Aboriginal people also grow in this area. Some of these are identified on the Wajil walk. Stop and read the signs to find out some of the traditional uses of these plants.

Goldsborough Valley is home to a variety of animals, from butterflies and birds to frogs and fish.

Various butterflies provide flashes of colour as they flutter through the rainforest. Look for green-spotted triangles Graphium agamemnon ligatum flying very rapidly along the edge of tracks and roads and around the camping area. While preferring the sunny forest canopy, these butterflies often descend to feed, hovering momentarily at each flower with wings constantly vibrating.

The orange plane butterfly Pantoporia consimilis consimilis is native to Queensland and a common sight here in the north. In this area you can find them resting on track-side vegetation with wings flattened to catch the sun. Orange planes have a distinctive, gliding flight that displays their orange and chocolate colours. They alternate a few quick wing beats with long glides, often changing direction mid-glide.

Listen for the famed 'kook-kook-kook'of the laughing kookaburra as they call to each other from their tree perches. Both the laughing Dacelo novaeguineae and blue-winged Dacelo leachii kookaburras can be seen and heard in this area.

Another noisy bird that may be encountered at Goldsborough Valley is the Australian king-parrot Alisterus scapularis. Their loud, characteristic 'cassak-crassak' flight call and bright red and green colours make them an easy bird to spot. They can be seen in pairs or flocks feeding on nuts, seeds, blossom, nectar and fruit.

In the forest understorey, watch for flashes of red-orange as the rufous fantail Rhipidura rufifrons hunts among the leaf litter for spiders, beetles and other bugs. This active bird fans and waves its long tail up and down and side to side, showing off the colour of its rump and tail, as it hops through the shadows in search of food.

Along the river, azure kingfishers Alcedo azurea can be seen perched on low branches or swooping down to the water in search of food. These small birds (17–19m tall), have a glossy blue back and a reddish-orange underbelly. Often visitors will see a flash of blue as this kingfisher plunges into the water for a fish and returns to its perch.

At night, listen for the loud, high-pitched 'cheep' call of the male ornate nurseryfrog Cophixalus ornatus. These small, squat frogs are about the size of a 20-cent piece. They have bumpy skin and vary in colour from pale cream to dark brown, flecked or blotched with various markings. During the day these frogs hide under rocks, logs and bark on the forest floor. They emerge at night and the males adopt an elevated perch among the vegetation 15–200cm above the ground. From here they call to the females to entice them to mate. The females lay their eggs in a hollow in the ground. These eggs hatch into fully formed froglets—there is no free-swimming tadpole stage.

In the river, look for various species of freshwater fish such as rainbowfish, fly-specked hardyheads, jungle perch and eels. Rainbowfish Melanotaenia spp. are small, active, schooling fish that grow 5–8cm long. They are usually the first fish to investigate disturbances in the water. Rainbowfish are opportunistic feeders, eating plants, aquatic insects and insect larvae, crustaceans and plankton.

Another small (about 5cm) and active fish that lives in the Mulgrave River is the fly-specked hardyhead Craterocephalus stercusmuscarum. These fish have a long tubular body and large eyes. Often they have lines of spots along their bodies but these can disappear if the fish is distressed.

Jungle perch Kuhlia rupestris are identified by their tail, which has two distinct dark blotches on the end of the upper and lower lobes. They have large eyes and their body is covered with numerous reddish-brown or light brown spots. These fish are very active and inquisitive, and will investigate and watch people. Jungle perch mainly eat insects that fall on the water’s surface, but also feed on figs and other fruits, crustaceans and small fish.

The longfin eel Anguilla reinhardtii is one species of eel that may be seen in the Mulgrave River. Commonly growing up to 1m long they are mainly carnivorous; sometimes eating plants but more often eating fish or any other prey they can find. The life-cycle of the longfin eel is fascinating: adults spend 20 years or more in fresh waters, and then migrate to the deep ocean channels (down to 300m) in the Coral Sea near New Caledonia to breed, spawn and then die. From tiny free-floating eggs, transparent leaf-shaped larvae develop. The larvae float on ocean currents for up to three years until they are carried back to the coast. On reaching coastal waters the larvae transform into the familiar cylindrical adult shape, but still lack colour, and are called glass eels. While in the coastal waters these 4-8cm long glass eels develop pigmentation and teeth before migrating upstream into fresh water.

As it pops its head up for a breath you may catch a glimpse of a saw-shelled turtle Elseya latisternum. Named so because the hind shell of hatchlings is strongly serrated—a feature that is reduced or lost in adults. They feed on aquatic insects, fish, tadpoles and frogs and are one of few native animals that can successfully prey on cane toads.

The land and waters of Goldsborough Valley are the traditional country of the Dulabed Malanbarra Yidinji speaking clan. They are part of the Yidinji people, one of many rainforest Aboriginal groups within North Queensland.

The Goldsborough Valley area was used by the Malanbarra for various activities such as ceremonial gatherings and camps during both the wet and dry seasons. The rainforest and the river were important sources for food and tools.

Having lived in the area for thousands of years before European settlement, the Malanbarra people have a strong and continued connection to their country, including an intimate knowledge of the environment including the seasonal availability of local bush foods.

The Goldsborough Valley once resounded with the noise of picks and shovels mining the dirt in search of golden morsels of wealth. During the 1870s, thousands of miners arrived in the area to work alluvial gold along the Mulgrave River and tributaries of Toohey and Butchers creeks. The miners were part of an exploding economy that supported 17 hotels and almost as many pubs. By the 1880s, reef mining was also in operation and two settlements developed on what became known as Mulgrave Field. These settlements were Top Camp on Butchers Creek and Fanning Town on the junction of the Mulgrave River and Toohey Creek. The name Fanning Town was later changed to Goldsborough. Between 1879 and 1886, the Mulgrave Field produced 3894 ounces of gold.

When gold ran out in the mid-1900s Goldsborough disbanded; however, some of the miners settled as cane growers, timber harvesters, pastoralists and horse breeders. The remaining forest became Goldsborough Valley State Forest, incorporating Kearneys Falls and Kearneys Flat, named after a grazier who lived in the area when mining was still flourishing. Frank Kearney died a lonely death on his property in about 1920.