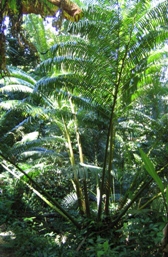 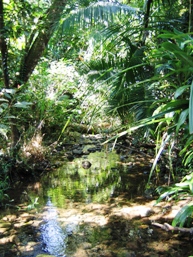 The part of the Goldfield trail that is within Wooroonooran National Park forms part of the Wet Tropics World Heritage Area (WTWHA). Proclaimed in 1988, the WTWHA extends for about 450km between Cooktown and Townsville. Consisting of nearly 900,000ha of tropical rainforest, open eucalypt forest, wetlands and mangrove forests, the WTWHA meets all four natural criteria for World Heritage listing. These criteria recognise the area's exceptional natural beauty and the importance of its biological diversity and evolutionary history, including habitats for numerous threatened species. The WTWHA also has cultural significance for Aboriginal people who have traditional links with the area and its surrounds.

Along the trail look on the ground for fallen fruit and seeds, many of which bear the marks of white-tailed rats and other animals. In the winter months you may also notice the strange flowers of Balanophora fungosa. These brown knobs look like mushrooms pushing through the earth but the common name, fungus root, is misleading as this is a true plant. It does not produce green leaves but is a parasite on the roots of other plants, obtaining nutrients from them.

An orania palm Oraniopsis appendiculata grows close to the trail at the creek crossing about 4.5km beyond The Boulders Scenic Reserve. Looking like a coconut palm, oddly placed in the rainforest, this is actually an endemic palm that grows under the canopy in wetter, higher altitudes. It is the only Australian representative of this genus but it closely related to palms growing in Chile in South America.

King ferns Angiopteris evecta line many of the creeks along the trail. These ancient plants have changed little in 300 million years and have enormous fronds. Growing up to 5m in length and sprouting directly from the ground, they are believed to be the longest fern fronds in the world.

Red-bellied black snakes Pseudechis porphyriacus are common along the trail. They are usually found around water and damp coastal forests where they feed on aquatic animals and small reptiles. They are quick to retreat and if cornered tend to make bluff attacks, preferring not to waste their venom. This venom is the least toxic of the black snake genus and fatalities are rare. However it is known to affect body muscles and may cause paralysis so these snakes should be avoided.

The Malanbarra people have occupied this area for thousands of years. In the dry months they lived on the high banks of Bana Baddi (Mulgrave River), catching fish, turtles and prawns. In the wetter months they moved into the forest and sometimes to the area at the top of Wajil (Kearneys Falls) and beyond, collecting black beans and yellow walnuts for food.

The Wonga family, a small clan group of the Yidinji people, lived on the banks of Babinda Creek before the town of Babinda was established. They hunted and gathered food along the banks of the mountain creeks. One of their legends tells how a young woman, parted from her lover, drowned in Devil’s Pool, at The Boulders. Her spirit continues to lure young men to their watery death.

Gold was discovered in the Mulgrave Valley in the late 1870s, bringing a rush of miners and the establishment of the town of Goldsborough. Within 10 years the gold had run out but William Kraft’s 1930s discovery of gold on the north-western slopes of Bartle Frere brought a new rush of prospectors. Eager to reach the area, men and packhorses, carrying equipment and stores, made a rough trail from the coast over a saddle in the Bellenden Ker Range. The trail fell into disuse when the goldfield failed to live up to its promise. Today it is known as the Goldfield trail.