The diadem leaf-nosed bat is a near threatened mabi forest inhabitant. 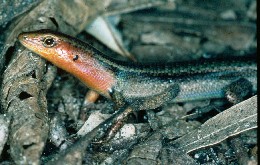 Look for rainbow skinks sunning themselves on rocks and logs. 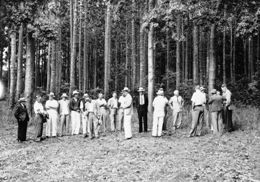 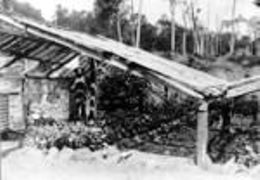 The volcanic features of the landscape on this part of the Atherton Tableland are between 10,000 years old (Pleistocene era) and 2 million years old (Pliocene era). As the volcanic rocks cooled and eroded, they formed the fertile basalt soils of today and were colonised by mabi forest. The forest floor of Wongabel is littered with basalt boulders. As a result, although the area was selectively logged, it was too stony to be cleared for agriculture.

Mabi forest occurs only on fertile basalt soils (high in phosphorus and calcium) in areas where rainfall is between 1300mm and 1600mm a year.

Mabi forest is a threatened ecosystem with less than four per cent of the original forest remaining. It is only found on the Atherton Tableland, and once covered the area south and east of Atherton.

The agricultural potential of mabi forest land has meant that nearly all of it has been cleared for farming and, although the remnants are now officially protected, they are still threatened by feral and domestic animals, weeds and the effects of isolation.

The widespread clearing of mabi forest has resulted in four plant species being listed as near threatened (rare). One of these, the pink leaf haplostichanthus Haplostichanthus sp has been recorded at Wongabel. Red-fruited sauropus Sauropus macranthus, a vulnerable plant species, can also be seen along the track edges.

From planting to processing

The hoop pine timber harvested from Wongabel is processed locally and sold throughout Queensland. Planting to harvesting takes between 40 and 45 years.

Hoop pines are planted in north Queensland during the wet season. Trees are planted about 3m apart, with 5m between rows allowing for 666 trees per hectare. For the first 2.5 years, or until 90 per cent of the trees have reached 1.5m in height, weeds are controlled to ensure the pines reach their full potential. Side branches are pruned to a height of 5.5m 5–8 years from planting so the trees produce knot-free timber, which has a higher commercial value. After harvesting, the area is quickly replanted with seedlings, ready for the next 40–45 years of growth.

A range of frogs and reptiles has been recorded in mabi forest, including a near threatened (rare) skink—Eulamprus tigrinus. Also found are several wet tropics endemics—the Boyd's forest dragon Hypsilurus boydii and skinks Carlia rubrigularis and Saproscincus basiliscus. The northern crowned snake Cacophis churchilli is also a mabi forest resident and the only snake species found exclusively in the wet tropics.

The musky rat-kangaroo Hypsiprymnodon moschatus, a primitive marsupial common in the rainforests around Lake Eacham and Lake Barrine, and the southern cassowary Casuarius casuarius johnsonii are now locally extinct from mabi forest. Research suggests that remnants of mabi forest, like Wongabel, are too small to support viable populations.

Over 90 bird species have been recorded in Wongabel State Forest. Look for the grey-headed robin hopping along the forest floor in search of insects, spiders, grubs and snails. Watch the dance of the rufous fantail Rhipidura rufifrons—tumbling, diving, twisting and looping in an energetic performance, it flits close to the leaves, flushing out insects. During the wet season, listen for the male tooth-billed bowerbird Scenopoeetes dentirostris. The vocalist overlooks a stage—a flat clearing, swept clean and decorated with pale leaves and loudly and vigorously mimics other birds, switching abruptly from low, harsh rasps and soft mellow notes to high, clear whistles.

Lumholtz's tree-kangaroos are a common resident of Wongabel State Forest. Spotlight for them at night or search the canopy for their sleeping forms during the day. Red-legged pademelons Thylogale stigmatica are often seen and heard while walking along the track. A distinct stomp sends warning signals to other red-legged pademelons that danger is approaching. These small wallabies will often bounce short distances before stopping to look back.

The scurry and rustle in the leaf litter as you walk along the track is probably a retreating rainbow skink Carlia rubrigularis. Walk quietly and look for them sunning on rocks and logs.

The Aboriginal Traditional Owners of Wongabel used this area as a seasonal camp. They hunted and gathered fruits and plants in the forest, and fished in the creeks. Their affinity with the land continues today and they are actively involved in the management of the area.

In the early 1900s, all commercially viable timber was removed from Wongabel State Forest. The land was then abandoned because it was considered too stony for agriculture. In 1903 the land was declared Crown Reserve and work began immediately on returning red cedars to the forest. Seedlings were relocated from forest between Atherton and Tolga and many are still visible today. This forestry plantation program was the first of its kind in Queensland.

The red cedar replanting program continued for three to four years before the area was again abandoned. Renewed efforts in 1911 saw a nursery established and plantings of a variety of species were conducted. During this time, Wongabel was established as the Atherton Tableland base for forestry. This work continued until 1917 when all plantation work ceased due to impacts of World War I.

It wasn't until around 1929, in the Depression, that planting restarted at Wongabel. Workers were employed under the labour employment scheme—similar to more recent 'work for the dole' schemes. Most of the plantings of this time were done during or soon after the Depression, ceasing when World War II began. It was during this time that hoop pines were first planted at Wongabel.

After World War II there was a long lapse in programmed plantings at Wongabel, with much work being conducted ad hoc and spasmodically. It wasn't until a forestry research branch was opened in Atherton that formal planting programs at Wongabel recommenced. The research branch looked at flowering patterns, growth rates, regeneration and recruitment, conducting much of their experimentation at Wongabel. These trials included under-planting southern silky oaks with red cedar, in an effort to control tip moths in the cedars. These plantings were well underway in the early 1950s and are still evident today.

After these research trials, the lack of an ongoing planting program meant that the thinning and pruning of trees was not undertaken. The 1970s saw some thinning and harvesting but it did not continue. In the early 1990s, programmed harvesting began and continues today. By this time, some of the hoop pines were over 70 years old, well outside their usual average 40-year cycle.

In more recent years, 190 tree species were numbered and used by new forestry employees as a training tool for rainforest tree identification.

Many forestry employees have made a significant contribution to the development of state forests. Sam Dansie was one of the first employees to introduce a conservation ethos into forest management. He was instrumental in setting aside conservation areas, both within and outside state forests, because of their outstanding beauty or environmental significance.