We recognise the traditional custodians of Wiliyan-ngurru— the Indjalandji-Dhidhanu people, and pay our respects to Elders past, present and future. The sinkholes are just an indication of what lies beneath.

Camooweal Caves are an extensive system of caverns beneath the Barkly Tableland. During Cambrian times, approximately 550 million years ago, shallow seas deposited the flat beds of dolomite (calcium-magnesium carbonate) that make up the tableland. Over time, water percolating through the fractures and bedding planes in the dolomite dissolved the rock and created a series of large, twisting caves connected by vertical shafts, some up to 75 m long. Portions of the caves’ roofs collapsed, forming sinkholes on the surface.

A 1970s aerial study of the tableland revealed 80 definite and 67 possible sinkholes with the largest concentration found in the Camooweal area. These sinkholes are only surface signs of the elaborate cave systems underneath.

Seasonal flash flooding occurs throughout the caves in the wet season. In the dry season, the water table recedes deep into the shafts, leaving the caves dry for the remainder of the year.

Much of Australia’s landscape is influenced by seasonal change. In North Queensland, the two distinct seasons—wet and dry—have an enormous influence on the environment and the animals that live in it.

As the dry season settles in, Nowranie Creek slows to a trickle and the waterholes retreat to muddy puddles. By the end of the dry season, there is often no water left. The landscape seems harsh, arid and lifeless. Most animals rest during the day or migrate to other, less harsh, regions.

Go with the flow

Floods during the wet season are a rejuvenating event, with large volumes of water spilling along and outside the creeks. The force of the water flushes stagnant pools and debris, and triggers an explosion of life in the thirsty landscape. The gnarled roots of trees—like the river red gums Eucalyptus camaldulensis—play an important role in stabilising the banks and trapping nutrients along the creek. Nowranie Creek comes alive during the wet season as animals use the favourable conditions to feed and breed. 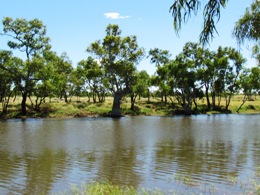 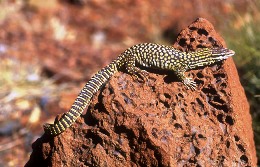 The Indjalandji-Dhidhanu people have lived in the wider Camooweal area since their Dreaming ancestors formed the landscape and imbued it with its natural and cultural features.

Contemporary archaeological evidence confirms that Aboriginal people have occupied this area for an extended period—estimated by scientists as many tens of thousands of years—prior to the first contact with Europeans in the early 1860s.

Prior to European settlement of the region, the Georgina River and its tributaries and waterholes in the vicinity of Camooweal, including the adjacent park area, were favoured locations for long-term camping, and bases for hunting and gathering activities from throughout the surrounding desert and semi-desert areas. The Georgina River formed part of a major Aboriginal trade route— running north-south across the country—in which the Indjalandji-Dhidhanu people and their tribal neighbours participated. Along this route, materials and resources were exchanged as part of the regional Aboriginal economy, and ceremonies to sustain the society’s socio-political and religious life were conducted.

The Indjalandji-Dhidhanu people continue to observe and uphold their traditional laws and customs. According to traditional law, Wiliyan-ngurru National Park is associated with and traversed by a number of Dreaming places (routes travelled by the ancestral spirits who shaped, and now inhabit, the landscape at key locations). The Dreaming places within the park form part of a complex array of sites of significance to the Indjalandji-Dhidhanu people. These sites include the caves and waterholes, a number of burial sites, numerous camping and ceremony sites and many quarry sites for the manufacture of stone tools.

The main Dreaming is the ridge-tailed monitor Varanus acanthurus or Wiliyan-ngurru Dreaming which is associated with the caves. The Indjalandji-Dhidhanu people ask that visitors take special care not to stand too close to the edge when near the caves.

The flora and fauna within the park are important resources to the Indjalandji-Dhidhanu people. Edible fauna species include echidnas, yellow goannas, plain goannas, kangaroos, emus and Australian bustards.

Important plant species include snappy gum, spinifex and western bloodwood. Snappy gum timber is used to make digeridoos, boomerangs and coolamons. The trees also provide homes for native bees that produce ‘sugarbag’ (honey). Spinifex is valued for its’ wax (resin) that is used for medicinal purposes and to haft stone tools to wooden handles. Western bloodwood produces a gum used to treat sores and to tan leather hides. The trees also produce bloodwood apples or ‘bush coconuts’. These round, nut-like growths found on the tree branches contain a soft layer of coconut-like flesh surrounding the larval stage of an insect (all of which can be eaten).

The park area is also valued by the Traditional Owners for its resources of high-quality chert—a beautiful, fine grained sedimentary rock locally known as ribbonstone. Chert is used by the Indjalandji-Dhidhanu people to make traditional stone tools such as tulas, blades and spear points.

Today, the Indjalandji-Dhidhanu people continue to maintain their traditional relationship to and responsibilities for the park area in a range of ways including the ongoing management of its cultural heritage values.