In winter, the park often comes to life with the annual flowering of native plants. 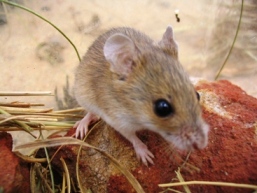 The Eastern pebble-mound mouse is one of the more unusual species that resides in the park. 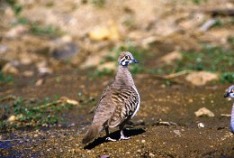 During winter and early spring the park is often transformed as native plants bloom across the landscape. Golden-orange, cream and red grevilleas, wattles in all shades of yellow, and white clustered ironbark flowers adorn the park. In some years of drought or fire, the wildflower display can be less spectacular as the plants recover from these events.

A host of birds, including parrots, honeyeaters and friarbirds, can be spotted in the canopies of trees. Listen out for the raucous call of the channel-billed cuckoo Scythrops novaehollandiae, a large bird with an almost toucan-like beak. Look for birds of prey, such as the peregrine falcon Falco peregrinus—Australia’s fastest bird—nankeen kestrel F. cenchroides and Australian hobby F. longipennis hovering in the thermals searching for small reptiles and mammals.

Amongst the hammock grasslands look for squatter pigeons Geophaps scripta scripta. These robust birds prefer to walk unless disturbed.

At night, don’t be fooled by the ‘woof-woof’ call of barking owls Ninox conniven. These dark brown owls have white spots on their feathers and large yellow eyes. On the roads, be aware of white-throated nightjars Eurostopodus mystacalis. These birds use the open area of the road to spot and pounce on small insect prey.

Mounds of eastern pebble-mound mice Pseudomys patrius have been found in the Burra Range section of White Mountains National Park. These animals build turrets of marble-sized stones at the entrance to their burrow to collect much needed dew. Spectacled hare-wallabies Lagorchestes conspicillatus, also found in the park, have a rufous-brown eye ring. During the day they shelter under vegetation or in burrows, coming out at night to search for herbs, grass and fruit. Outside the park, both of these mammal species are experiencing changes to their habitat as a result of grazing, changes in fire patterns, erosion and predation.

Before becoming a national park, the White Mountains area was grazed and old wagon trails, graves and dwellings are evidence of this bygone era.