The Tully River starts high in the Cardwell Range. 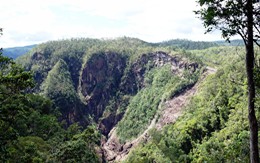 The gorge has formed along a fault line.

Tully Gorge National Park is in the Wet Tropics World Heritage Area. Proclaimed in 1988, the area is almost 900,000ha and extends for about 450km between Cooktown and Townsville. The area's vegetation includes tropical rainforest, open eucalypt forest, wetlands and mangrove forests. The area meets all four natural criteria for World Heritage listing. These criteria recognise the area's exceptional natural beauty and the importance of its biological diversity and evolutionary history, including habitats for numerous threatened species. It also has cultural significance to the Aboriginal people who have traditional links with the area and its surrounds.

Gouging out the gorge

The Tully River has ‘captured’ the headwater of a number of waterways, including Davidson, Jarra and Banyan creeks, offering them a shorter downhill route. These new contributions have strengthened the Tully River, giving it the power to gouge into the escarpment. The river also follows a major north-west-trending fault system that cuts through the area. The more powerful river, combined with the fault system, has led to the formation of Tully Gorge.

The Tully River is 130km long and, from its source in the Cardwell Range, flows north for about 50km before turning eastward and finally discharging into the sea at Rockingham Bay.

This upland section of the national park protects a variety of vegetation types from diverse upland rainforest on basalt (deep, red) soil to tall, open forest on rhyolite (thinner, grey-brown) soil. From the lookout, woodland featuring brush box Lophostemon confertus and pink bloodwood Corymbia intermedia stretches down the escarpment. The stringybark pine Callitris macleayana also grows down the steep slopes. This species of cypress pine is native to the area and unique in that it grows in rainforest—all other species grow in drier areas.

Hydro-electricity on the Tully River

Water is captured from the dam and released back into the river through the 7.3 megawatt (MW) Koombooloomba hydro-electric station. From here the water flows approximately 13km to the Tully Falls Weir, just above the Tully Falls. The water is then diverted down the range, via a concrete intake structure, and into the 88MW Kareeya hydro-electric station located about 2km below the falls and about 50km north-west of Tully.

The Jirrbal people are the Traditional Owners of the western sections of Tully Gorge National Park. Their dry forest and rainforest country extends from Herberton in the north, west to Ravenshoe, east to Evelyn Central and south to Davidson Creek at the bottom of Tully Gorge.

These Traditional Owners have an intimate knowledge of traditional country and close kin affiliations with neighbouring groups. They maintain traditional links with their country and are involved in its management and protection.