Teerk Roo Ra means 'place of many shells'. The island was well used by the Quandamooka People of Moreton Bay for its rich land and sea resources.

The island did not attract great interest from the first Europeans to arrive in Moreton Bay. Its usefulness as a place for detention and isolation was recognised later and it became the site of several government institutions. In the late 1800s the island was recognised as a good site to detain and isolate people from the general population.

In 1873 Peel Island was proclaimed a reserve for quarantine purposes. The following year a quarantine station was built on the island's south-east corner. Through the 1870s and 1880s the station received a constant stream of immigrant ships, many carrying sick and diseased passengers. By the 1890s a sharp decline in immigration and a general improvement in public health saw the facility close. 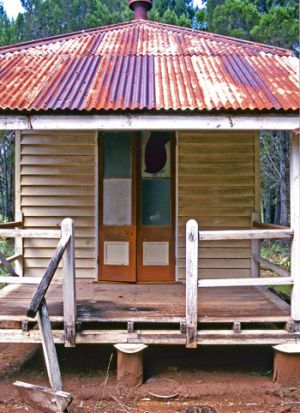 Patients of the lazaret, suffering from Hansen's disease (leprosy), lived in these small huts on the island. To protect these remains, most of the island is a restricted access area. 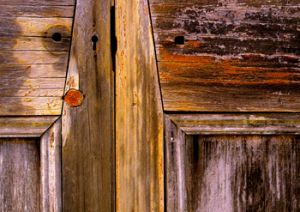 Close up of the door on one of the huts.

In 1906, 160 acres (64ha) on the north-west corner of Peel Island was gazetted as a reserve for a lazaret—a hospital for patients with Hansen’s disease (leprosy), with the rest of the island gazetted as a benevolent asylum. The site was chosen because it was on one of the higher ridges and away from the old quarantine station buildings.

The lazaret opened in July 1907 with 71 patients; 26 were transferred from North Stradbroke Island, 30 from Friday Island (in the Torres Strait) and 15 more patients arrived a month later from Cooktown, Cairns and Halifax. The lazaret became the first purpose-built, multiracial lazaret in Australia.

The lazaret was designed and constructed on the principles of isolation.Patients were housed in separate huts or compounds according to race, sex and severity of illness. The three main compounds were European male and female and non-European. The non-European compound consisted of both male and female patients whose origin was not predominantly European. This included patients of Melanesian, Chinese, Aboriginal, Pacific Islander and Indian descent.

Facilities for European patients consisted of a one-roomed weatherboard. Each hut was furnished with a bed, chest of drawers, table and chair. Soon after patients moved into the huts, awnings were added to provide greater protection from the elements. All new huts built after this time had awnings attached.

Other buildings constructed at this time included bath houses, dining rooms, kitchens, nurses’ cottage, attendants’ quarters and the caretaker’s residence that was moved from the North Stradbroke Island lazaret.

The lazaret is such an important part of history because it reflects the social and cultural values of the time. The treatment and accommodation for European patients was significantly better than for non-European patients, whose huts were of rudimentary construction, framed with bush timber, clad with cypress pine slabs and initially with tea-tree bark roofs, and earth floors.

The principles of isolation were not enforced in the non-European compound where huts, similar in size to those in the European compound, housed two patients. No separate dining or kitchen facilities were provided for males and females.

These huts rapidly deteriorated. Many patients complained bitterly about the conditions they were forced to endure. In 1910 the huts were upgraded; the bark cladding was replaced with corrugated, galvanised-iron sheets and concrete replaced the earth floors. A unisex dining hall was also built after patients had endured three years of eating under a tent fly.

A church was built in 1908 adjacent to the non-European compound. Although built as a non-denominational church it soon became known as an Anglican place of worship.

Over the years patient numbers fluctuated and a number of new buildings were constructed. Some of the most notable additions included a surgery or treatment room in 1925 followed in 1937 by a six-bed hospital. A new recreation hall was built in 1945, replacing an early building that was destroyed by fire in 1941.

The 'non-European compound closed in 1940. Patients were transferred to a newly constructed Aboriginal Peoples lazaret at Fantome Island near Townsville.

In the late 1940s a wooden jetty was built on the western side of the island, replacing the stone jetty as the main access point to the island. It was extended in 1956.

In 1959, with less than a dozen patients and effective drug treatment well established for leprosy, the lazaret became redundant and closed its doors. 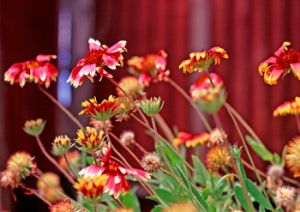 Flowers still survive in a garden bed adjacent to the dining hall of the island's lazaret. 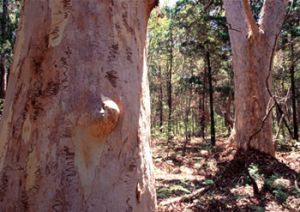 The basalt and sandstone soils of the island support native cypress, eucalypts, acacias and melaleucas.

The island’s vegetation has remained largely intact, but its structure has changed with varying management regimes. When the lazaret was operating, fire was used to maintain an open understorey and enhance the carrying capacity of the land for grazing.

Mangroves and mud flats provide an essential nursery for juvenile fish, crabs and shellfish. Dolphins, turtles and occasionally dugong can be seen surfacing in the waters of Moreton Bay around the island.

During winter, birds of prey such as kites, ospreys and sea eagles soar over the island.

Moreton Bay is designated as a wetland of international importance under the Ramsar Convention. For more information see the Australian Wetlands Database.

Golden swamp and agile wallabies are the only large mammals found on Peel Island. The golden form of the swamp wallaby is usually found only on sand islands. The agile wallabies on the islands of Moreton Bay are a relict population. The most southerly mainland population is now found around Rockhampton.